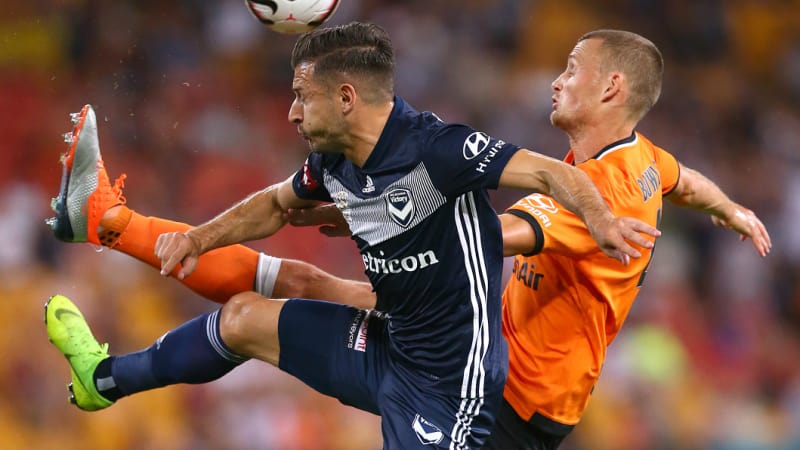 Champions Melbourne Victory could hardly be going into next weekend's pre-Christmas derby with Melbourne City in better shape.

Their 4-2 win in a topsy turvy game in Brisbane on Friday night took them to the top of the table, at least for a while. 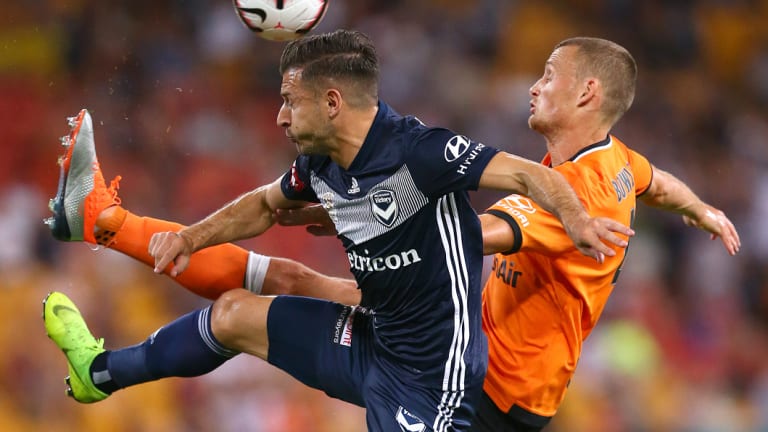 Kevin Muscat's men have 18 points from their eight games, one more than previous leaders Perth Glory who face Newcastle United in the Hunter Valley on Sunday evening.

The triumph means Victory have now won six games straight, only the third time in their history that they have achieved such a feat.

They are also one goal short of a club total of 599 in the A-League, so there would be no better occasion for Muscat and his team to crack the 600 than against cross-town rivals City next Saturday night at AAMI Park.

This was a bizarre game featuring six first-half goals, a penalty at either end, an own goal and a sending off – enough incident for several matches, let alone one half.

''In the first half I thought set-pieces we were under a little bit of pressure and conceded from two set-pieces, albeit the second one is an own goal, so there's clearly some areas for us [to work on].

''The fouls leading up to the free kicks or the corners, that's the first part of it, and then defending better, defending as a collective, but all in all I thought it was outstanding.

''That second half I thought we were very controlled and dominated territory and still pressed and really pressed with intensity, limited what was a depleted Brisbane team down to 10 men, limited them to very little in the second half and had enough opportunities to score. I am very, very satisfied with the result."

A clever corner routine involving Honda and James Troisi deep into injury time at the end of the first half led to Kosta Barbarouses’ second goal of the match against his old club – a strike which effectively ended the Roar’s fight.

‘‘Won’t be able to do that one again for a while will we? It was great execution,’’ Muscat said.

The day before this game Muscat had talked of his squad's strength, flexibility and ability to switch formation and play in different structures at will.

Against Brisbane they were again without German defender Georg Niedermeier and Spanish midfielder Raul Baena, but it made little difference.

"Mr Versatility", Leigh Broxham, again slotted in at centre half and James Troisi came in from the start.

Honda was his usual frenetic self roaming around the pitch, cajoling, inspiring and leading his team.

Ola Toivonen – who put through his own goal when he failed to clear a Brisbane free kick properly – also notched one down the other end with a sweeping first time finish of quality, and all in all

Victory just had too much for Brisbane after Frenchman Eric Bautheac's wild lunge saw him red carded in the first half.

With the game under control, Muscat's team simply ran down the clock in the second period.