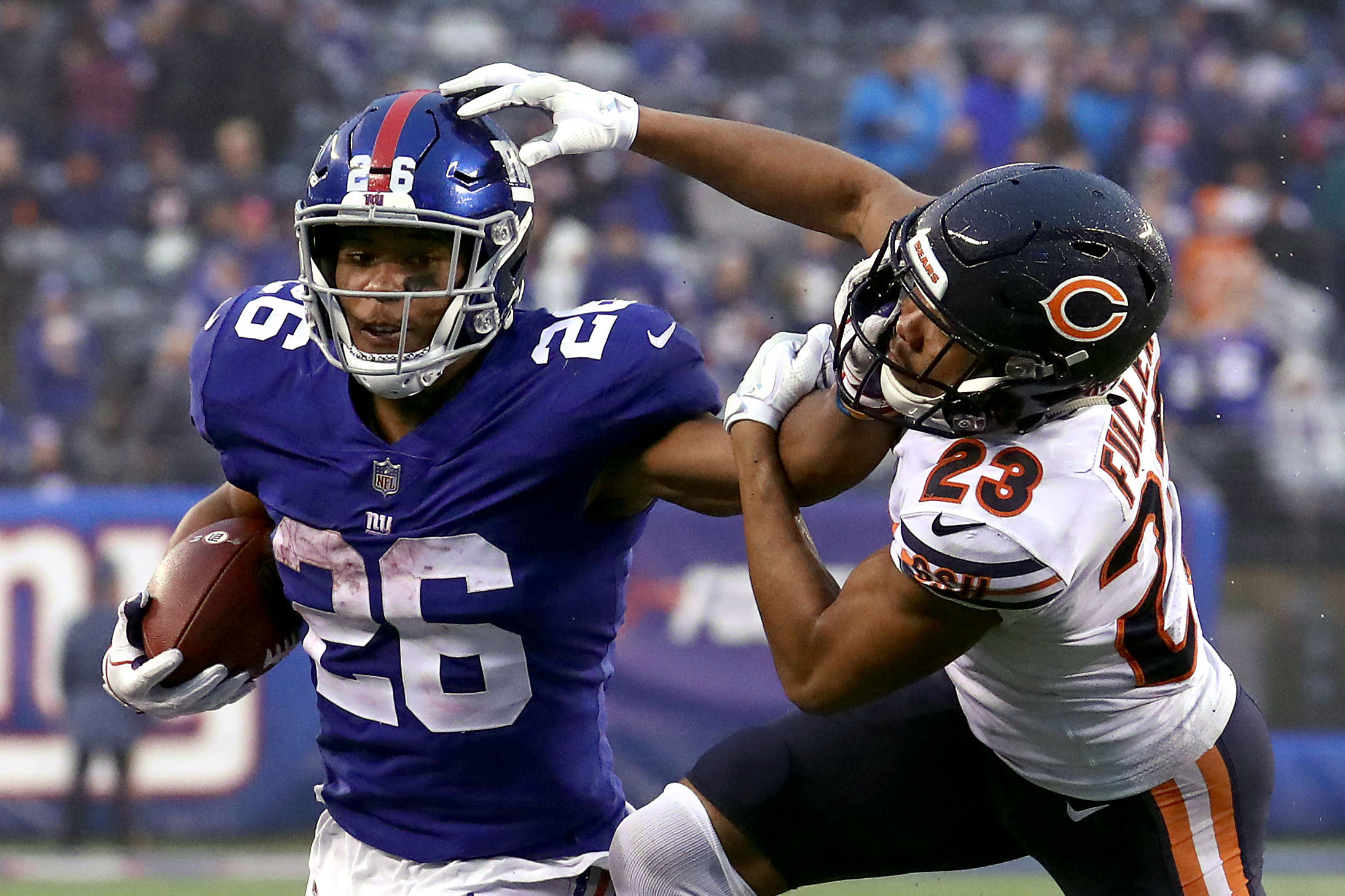 Unleashed Saquon Barkley has a thank you and milestone in mind

He wants it, he is going to get it and he knows whom he wants to thank most of all for it.

“I know we’re pretty close to it and that just speaks volumes to the offensive line, definitely want to get that for those guys,” Saquon Barkley said Monday.

He figures to get it Sunday against the Redskins at FedEx Field. Barkley’s 125-yard rushing effort in the 30-27 overtime victory over the rugged Bears puts him at 954 yards through 12 games of his rookie season. Breaking through the 1,000-yard mark is not exactly the same barrier it was before the advent of the 16-game schedule, but it is always a milestone for running backs, especially those in their first year looking to establish themselves.

Barkley has more than done that. The Giants knew he was something special before they made him the No. 2 pick in the 2018 draft. He has not disappointed. Far from it. After seeing Barkley run for more than 100 yards for the third consecutive game, coach Pat Shurmur, perhaps running out of accolades lauding Barkley’s physical gifts, described Barkley as having “a generational spirit” for the way he competes.

Barkley’s rise in production coincides with the offensive line finally gaining some traction as a five-man unit, starting together the past four games. Nate Solder and Will Hernandez were always constants on the left side and now Spencer Pulley at center, Jamon Brown at right guard and Chad Wheeler at right tackle allow Barkley to know exactly who is working in front of him, play after play, week after week.

“You definitely do sense it being different,” Barkley said. “Just because of injuries and people moving and replacing here and replacing here. Now we got a solidified five. If you notice, in three of the last four games we rushed for over 100 yards, that speaks volumes on their part and the way they’ve been playing and the confidence they’re having as they continue to grow through every game we’re playing this year.”

A steady and capable leader was needed — an anti-Ereck Flowers, if you will — and Solder has filled the role. He played though a neck issue earlier in the season and did not get off to a particularly inspiring start to his Giants career. The big guy is relentlessly positive and cheerful, polite and resolute in not saying anything to stir anything up, never coming remotely close to uttering a word or syllable that could be construed as critical of a teammate or a coaching move.

Barkley and Odell Beckham Jr. were the showstoppers as the Giants upset the Bears, but as the Giants and their oft-suffering fans know all too well, nothing much gets done if the offensive line is shabby. Solder is the largest (6-foot-8) building block, imported to hold down left tackle and help change the culture. He did a fine job dealing with uber-dangerous Khalil Mack, limiting one of the league’s best pass-rushers to one sack, coming in the fourth quarter.

“He’s an incredible player and he has the ability to control games and I don’t think he influenced that game in a way that he usually would,” Solder told The Post. “I don’t think he did. Do you?’’

Solder gets paid a ton and has a Super Bowl résumé from his seven years with the Patriots and thus much is expected of him. He gets the big bucks to neutralize the Mack-type players, the defensive menaces capable of wrecking a game. Mack was a force, but he did not wreck the game.

“I don’t take all the credit for that,” Solder said. “The ball was getting out quick, wide receivers were getting open and the play-calling was great. That helped me out the whole game.”

Brown, claimed off waivers Oct. 31 from the Rams, added bulk (340 pounds) and a freewheeling spirit that was missing. Facing the Bears’ talented defensive front was not viewed as mission impossible.