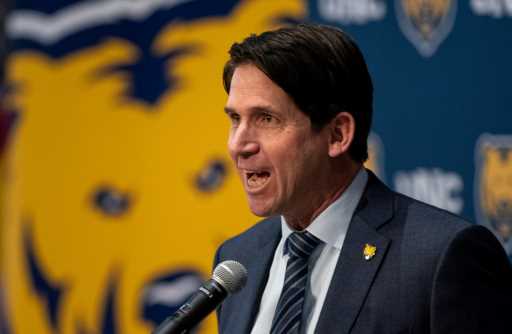 UNC football: Team McCaffrey bids to get Northern Colorado back on track

On this, they’re quite serious: Teaming up to help lead the Bears back to football prominence.

The Mac-to-Mac-to-Mac connection in Greeley features quarterback Dylan McCaffrey transferring in from Michigan and his big brother Max putting NFL tryouts on the backburner to serve as offensive coordinator. They’re joining forces with their dad, Ed, the longtime NFL receiver who was hired as head coach in December 2019 and will finally make his college coaching debut Sept. 3 at Colorado (the Bears’ season in 2020 was postponed due to the virus).

“We all want to get better. We all want to win football games,” Dylan said Wednesday after practice. “That really brings the respect in, along with the love.”

The McCaffreys have long been one of the first families of football in Colorado. There’s also Christian, a running back for the Carolina Panthers, and Luke, a quarterback at Rice. Of course, the glue is their mom, Lisa, who’s always at games.

As for the pressure of dealing with such a well-known last name — dad was a three-time Super Bowl winner with Denver and San Francisco — Dylan dismissed it: “I know my family because they’re my family.”

A dual-threat at Michigan, Dylan had a shot at the starter’s job with the Wolverines last season before dealing with an injury. He ended up entering the transfer portal and joined his dad with the Bears, a program on the Football Championship Subdivision (FCS) level that competes in the Big Sky Conference.

“Guys are flying, guys are competing,” Dylan said when asked about the speed difference between the Big Ten and the Big Sky. “It’s been so good to see just the talent on both sides. It’s been incredible.”

Max had stints with the 49ers, Green Bay Packers and Jacksonville Jaguars after his college career at Duke. The receiver had a chance to possibly latch on with another NFL team this season, but the situation with his dad was too good to pass up.

“It was such a smooth process going from playing to coaching,” said Max, who will split play-calling duties with his dad. “I’m having an absolute blast.”

Going over plays feels just like old times for the McCaffrey brothers. Dylan and Max used to draw up formations by moving around football cards. One football card would go right, and another would veer left.

“Definitely more official now,” Dylan said. “But it’s nice to have that little nostalgia attached to it.”

Over the years, the trick for Ed has been striking a balance between coach and dad. It’s been a work in progress as he’s worked with each of his sons.

“About 10 years of messing up with my kids kind of taught me when to take the coach’s cap off,” said Ed, who arrived at Northern Colorado after a successful run at Valor Christian High School in Highlands Ranch, Colorado, where he led the Eagles to a state title in ’18. “You’ve got to put your coach’s cap on and be objective, and give love and tough love — just like I would do with every player on our team.”

Asked to assess his QB brother, Max responded: “He’s all right. A little too big of a head but other than that.”

“Really excited to have Dylan here,” he added. “The whole family’s on board so it’s a blessing, getting to wake up and work with those guys every day.”

Asked to assess his offensive coordinator son, Ed replied: “He’s been grounded twice during this camp.”

“He’s really brought so much expertise from the teams that he’s played for in the NFL and added quite a dynamic to what we were doing,” said Ed, whose program has had two winning seasons over the last 16 it’s played. “Really excited about what he’s accomplished up to this point and even more excited to continue working with him.”

The hiring of Ed has led to an influx of high-profile players joining the Bears. Around the league, though, they’re still viewed as an underdog. They were picked to finish last out of 13 teams in the Big Sky coaches poll.

“No one’s going to give us anything,” Ed said. “We’ve got to go earn everything we get.”