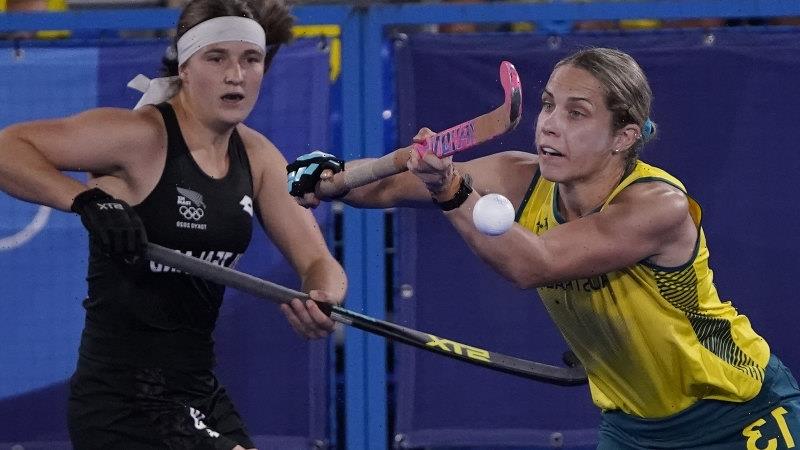 Unbeaten Hockeyroos march on after gritty win over New Zealand

The Hockeyroos have made their best start to an Olympics after racking up a fourth straight victory in pool B with a gritty 1-0 win over New Zealand.

In a match of few chances, Emily Chalker’s fourth goal of the tournament proved the difference between the sides on Thursday night. Chalker took her moment in the 36th minute when she deflected a cross from the right into the net after a rare sweeping movement. 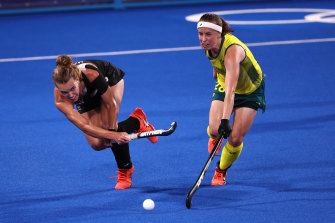 Emily Chalker was the match winner for the Hockeyroos on Thursday.Credit:Getty

It was a game where an ability to convert proved the difference between the trans-Tasman rivals.

The Hockeyroos had the better chances and were again resolute in defence, only conceding three shots for the match. Defence is what their Olympics success has been built on. They have conceded only one goal in four games, while scoring 11.

Australia’s well-stuctured defence rarely looked troubled by New Zealand, working as a team throughout the match, which became a battle of the midfields.

After a dour first half, in which the only chances came from a couple of penalty corners, Australia fashioned more opportunities in the second half and had 15 circle entries to five, resulting in eight shots to three.

New Zealand desperately searched for an equaliser in the fourth quarter. With four minutes remaining, they even took goalkeeper Grace O’Hanlon off to give themselves an extra field player. Even then they could not create a scoring opportunity.

Australia are now on course to finish top of their pool, which means they will face the fourth-placed finisher from the much stronger pool A, avoiding European powerhouses the Netherlands, Germany and Great Britain until at least the semi-finals. It is also why New Zealand needed to get something out of the match.

The Hockeyroos have moved up in the world rankings to No.3 during the Olympics and look the main threat to the Netherlands, who are also unbeaten in pool A, for the gold medal. Australia have a huge goal-difference advantage at the top of the pool and face second-place Argentina in the final game before the knockout rounds on Saturday.