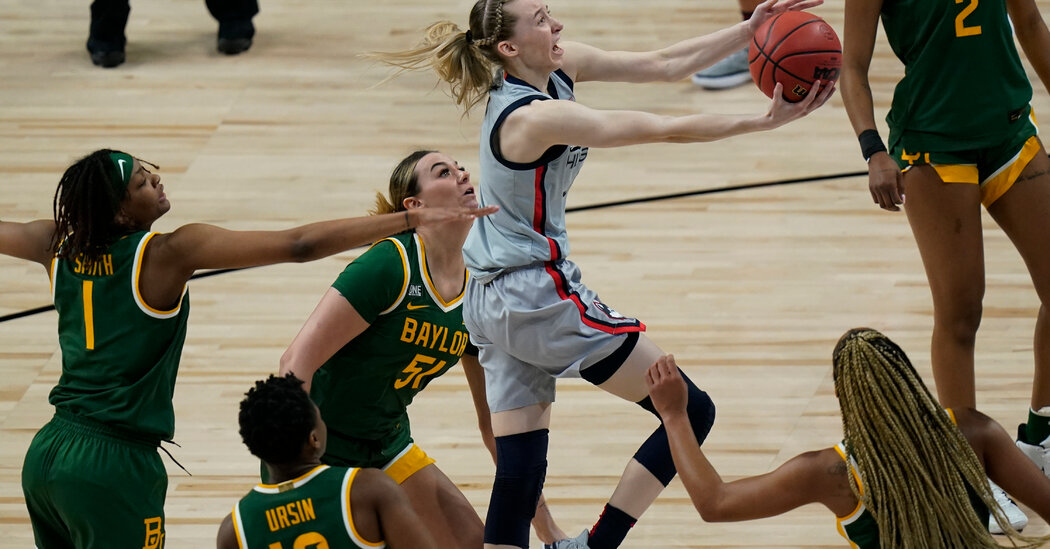 SAN ANTONIO — The Final Four of the N.C.A.A. women’s basketball tournament, it seems, came early — UConn sneaking past Baylor, 69-67, in a game between championship pedigrees that looked much more like a title slugfest than a test in the round of 8.

The Huskies used a 19-point run that started late in the third quarter to surge ahead, then held on for their tournament life until the final possession, when their freshman star Paige Bueckers snagged the Bears’ final inbound pass to seal the win, securing UConn’s 13th consecutive trip to the Final Four.

UConn has won the championship 11 times under Coach Geno Auriemma, who was mobbed by his team with paper confetti as he gave a postgame interview following the win.

Bueckers scored 28 points, asserting her presence early and then taking over again late as UConn turned back a determined Baylor team.

“Just to be a part of that history, that’s why I came here,” Bueckers said in a postgame interview.

Baylor held a 2-point lead going into the final quarter. The Bears repeatedly kept UConn from taking easy shots, knocking jumpers out of bounds and securing the ball off the glass to keep control. DiJonai Carrington served as her team’s main disruptive force off the bench, leading with 22 points, 7 rebounds and 2 steals and making numerous plays on defense to keep UConn from getting into a flow.

DiDi Richards, the 2020 Naismith defensive player of the year, went down clutching her left hamstring at the end of the third, and UConn started to close the gap. By the time Richards returned to the game, UConn had gained an advantage.

“The whole story of the game is DiDi Richards goes down and the whole momentum shifted,” Baylor Coach Kim Mulkey said.

The Huskies took the lead on a second-chance layup by Aaliyah Edwards with less than nine minutes left. Bueckers followed up with two jumpers, but the teams repeatedly fouled one another to inch the score up point by point. Two free throws with 19 seconds left by Carrington put Baylor back within a point of the win.

On Baylor’s penultimate possession, Carrington drove to the basket and wanted a foul to be called, but the referees did not blow the whistle and Baylor’s players were so frustrated that they delayed fouling as crucial time ticked away. “It’s a tough way to end a game,” Carrington said after the game. “Really frustrating, pictures don’t lie, tape don’t lie.”

It was UConn’s defense that came through at the end — the Bears missed their last four field goal attempts — to deliver yet another Final Four.

“This was harder than winning some of the national championships that we’ve won,” Auriemma said. 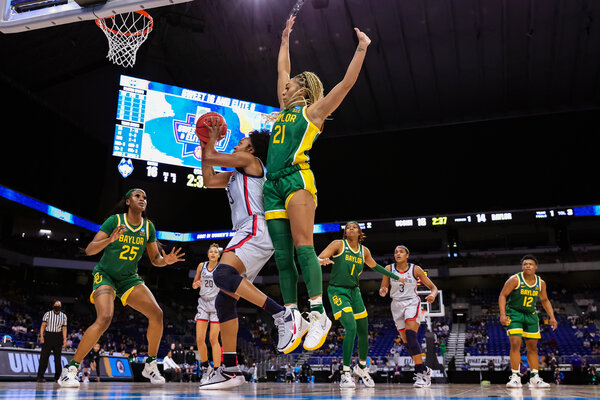 Mulkey had predicted correctly that the game could be “ugly,” with both teams scoring less than they were used to and turning the ball over more often.

The all-star matchup came a few months late: The Huskies were set to visit the Bears in Waco, Texas, in January before Mulkey contracted the coronavirus.

The last time the teams met was in January 2020, when the Bears — the reigning champion after winning the N.C.A.A. tournament in 2019 — walked away with a 74-58 win and snapped a 98-game home winning streak for UConn. A year earlier, Baylor broke UConn’s run of 126 consecutive regular-season wins.

Headed into their regional final, UConn and Baylor had met eight times, and each had won four times.

“I wish it was for the national championship and not a chance to get to a Final Four because I think both programs are just elite and it’s a shame somebody has to lose,” Mulkey told reporters on Sunday.

Their matchup happening this early in the tournament was in part a credit to the depth at the top of the 64-team field, with Baylor as one of several formidable teams seeded second who could certainly be considered title contenders. Already in this tournament, some teams at the top have been tested, and one No. 1 seed, North Carolina State, was upset by Indiana in the round of 16.

“Explain to me how they are a No. 2 seed,” Auriemma said of Baylor on Sunday. “These things happen, I know, but I think they deserved to be an No. 1 seed, if you look around the rest of the tournament.”

To reach the round of 8, Baylor blew past its first- and second-round opponents but needed overtime to prevail against Michigan in the regional semifinal, 78-75.

Its best player this tournament has been NaLyssa Smith, a junior forward from Converse, Texas, who had made 26 of her 33 shots this tournament leading up to Monday’s game, including all 11 she took in Baylor’s round of 16 win. Against UConn, she had 14 points.

UConn has delivered three clear wins in this tournament, its first two without Auriemma present after he contracted the coronavirus. The Huskies won in the round of 16 by containing Caitlin Clark, the leading scorer in Division I, and Iowa in a 92-72 victory on Saturday. Bueckers has been the buzz for the Huskies — posting 62 points, 23 rebounds and 18 assists in their first three tournament games — but Saturday’s game reminded opponents that UConn’s depth is its true weapon.

No. 4 seed Indiana was playing No. 3 seed Arizona on Monday night in the first appearance in the round of 8 for each team. On Tuesday night, top-seeded South Carolina faces No. 6 seed Texas while Stanford, another top seed, plays No. 2 seed Louisville for the other two spots in the national semifinals scheduled for Friday.