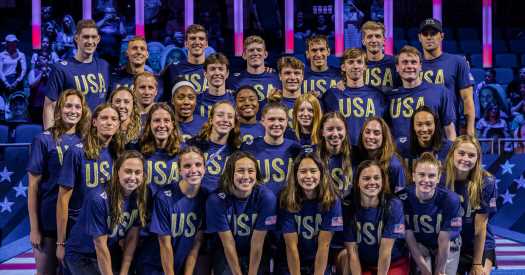 OMAHA — But for the pandemic, the teenager Lydia Jacoby was a lock to go to the 2020 Olympics — as a fan on a family vacation with her parents.

Though she had surpassed the 100-meter breaststroke qualifying time for the U.S. Olympic trials two years earlier as a precocious 14-year-old, Jacoby was in a race against time in the winter of 2020, with only a few months to lop a sizable chunk off her personal best to seriously contend for a spot on the Tokyo-bound team.

The coronavirus-induced postponement of the Tokyo Games worked in Jacoby’s favor, enabling her to gain more strength in the weight room as well as another year of physical maturity. The benefits of the yearlong delay to first-time trials participants like Jacoby were incontrovertible at the eight-day U.S. trials at CHI Health Center, which concluded Sunday.

Jacoby, 17, was one of 11 teenagers who earned berths on the 50-member team of pool swimmers, the most since 1996. Then, as now, the U.S. was reloading after the retirement of a once-in-a-generation talent. 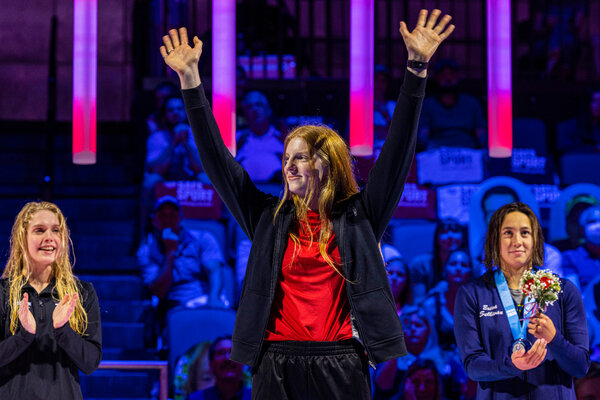 In 1996, it was the three-time Olympian Matt Biondi, who won 11 Olympic medals, including seven in 1988, who had left the sport. This year, for the first time since 1996, the 28-time Olympic medalist Michael Phelps was not competing.

Thirty swimmers from the 2016 Olympic team returned in 2021 to vie for spots; 15 failed to repeat, including Nathan Adrian, 32, a five-time Olympic gold medalist who finished third, .25 of a second behind Michael Andrew in Sunday’s 50-meter freestyle final, won by Caeleb Dressel.

And for a second consecutive Olympics, the U.S. team will include Simone Manuel, who secured her berth in the final women’s event, the 50-meter freestyle. Manuel, 24, the 2016 Olympic silver medalist in the 50, out-touched Abbey Weitzeil, who had won Manuel’s signature event, the 100 free, on Friday after Manuel, who tied for the gold at the 2016 Olympics, failed to advance out of the semifinals.

Manuel, whose preparation was severely compromised by overtraining syndrome, opened up about her struggles Thursday night in a news conference. She acknowledged her vulnerability after six months of trying to soldier on but was her old, bold racing self in the 50 freestyle.

“I tried to swim loose and lighthearted in the 50, but sharing my story allowed me to prove myself and go out and fight for my spot on the team,” Manuel said. “I am trying to be a better Simone than I was the day before.”

Veterans burdened by their expectations were more affected by the Olympics interregnum than youngsters like the 100-meter butterfly winner, Torri Huske, 18, who was intently folding origami paper 30 minutes before her races.

“I don’t like to think about my swims until I’m warming up,” Huske said. “And even then I feel like I kind of just block it all out until like 15 minutes before.”

Joining water sprites like Huske on the women’s team are a handful of veterans who thought they were done swimming five years ago. They include the freestyler Allison Schmitt, who became the fifth woman after Dara Torres, Jenny Thompson, Jill Sterkel and Amanda Beard to qualify for a fourth Olympic team after placing on pause the master’s degree in social work that she started after returning from Rio de Janeiro.

The breaststroker Annie Lazor and the sprint freestyler Natalie Hinds both retired after disappointing performances at the 2016 trials left them off the Olympic team. Each decided to return to the sport after determining she wasn’t ready for a post-swimming career yet. So who knows? Perhaps a few of the swimmers who left these trials devastated at being left off the Olympic team will resurface in three years to contend for U.S. berths to Paris in 2024.

“This was the hard part,” said Dressel, who is also eligible for four Olympic relays. He was referring to the stress of this meet, which is considered more grueling than the Games itself because of the deep pool of American talent.

Dressel said it was heartbreaking to watch former Olympic teammates like Ryan Lochte, a training partner, fall short. At the same time, Dressel added, the infusion of new blood is invigorating.

“You have people from different backgrounds, different ages, different club teams all around America, and we are becoming one team,” he said.

One of the freshest faces is Jacoby, who is from the port city of Seward, Alaska, a two-hour drive from Anchorage. She swam nearly three seconds faster than her best prepandemic time in the 100 breaststroke to finish second to the 2016 Olympic champion, Lilly King. Jacoby is the first Alaska-born swimming Olympian and only the second Summer Games participant from her home state.

She took swimming lessons when she was small because her parents, Richard and Leslie, are professional boat captains who wanted to make sure she was water safe. Her aptitude for the breaststroke was evident from the start. Her long legs and unusually flexible ankles combine to make her kick extra propulsive.

Jacoby, who will be a senior at Seward High, is coached by Meghan O’Leary at Seward Tsunami Swim Club. It is a small team of roughly five dozen athletes of varying levels, less than the average senior national group at powerhouse club teams in the continental United States.

She will have as many teammates at the Olympics as she does on her club team, and the Olympic training camp in Hawaii will be her first time stringing workouts together in a 50-meter pool. At home, she trains in a short-course facility (25 yards).

When the team’s training facilities closed last year during the lockdown, Jacoby traveled to Anchorage to train with Ben Kitchen at Northern Lights Swim Club. Her parents rented a place to cut down on the commuting, and when they couldn’t make the trip, Jacoby stayed with local swimming families.

“That’s what’s great about Alaskan swimming,” said O’Leary, an Alaska native. “The teams are not just looking out for each other.”

Going into 2020, O’Leary and Kitchen considered Jacoby to have only an outside chance of making the Olympic team. “It would have been more of a fan trip than a business trip,” Kitchen said.

Jacoby took advantage of the extra year to spend more time on her strength training, and with added muscle, she gained belief. Her expectations coming into the week, Kitchen said, “were pretty much exactly what she did.”

So Jacoby’s Tokyo family vacation has morphed into a trip with her new swimming family, Team USA.

“It’s definitely crazy having known all those amazing people,” Jacoby said, “and know that I’m now one of them.”