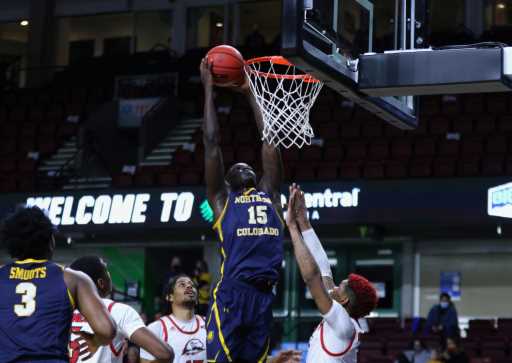 The Bears did a lot of good things in the contest. UNC out-rebounded SUU, 37-34, and kept the Thunderbirds off the 3-point line. After getting down 12 at halftime, the team started the second period with a run to keep the contest close and pulled itself within four points with less than two minutes left.

Those good things, however, couldn’t overpower the mistakes and unfortunate incidents — such as junior guard Matt Johnson’s rolled ankle that took him out of the game for about seven minutes in the first half.

Northern Colorado finished their game with 18 turnovers to Southern Utah’s nine, and the team missed nine free throws. The team also recorded 24 personal fouls, though several occurred at the end to try and regain possession.

“I told the guys after the game, I’m really proud,” Smiley said. “When you lose your last game —  in the Big Sky, you’ve got 11 teams that all have a belief that they’re going to get it done, including us — and when it ends, you don’t expect it. It’s tough.”

Hume tied his career high from Wednesday with another 30-point game. He added eight rebounds, two assists and a block. Smiley said Hume is known for his scoring, but he couldn’t be more pleased with the growth he’s seen from the team captain playing off the ball and as a leader.

Additionally, junior forward Kur Jockuch recorded his sixth straight double-double in the Bears’ final game, making him No. 2 in the league for the stat and in the top 100 players nationally.

Colorado transfer Daylen Kountz finished his first season at UNC with an impressive stat line as well. He contributed 22 points, three boards, four assists, one block and one steal.

“It wasn’t a perfect game or a pretty game,” Smiley said. “There were a couple things we wish we could’ve gotten back, but I am very proud of how hard our guys played. We’ll definitely sleep well tonight knowing we left it all on the floor.”

The UNC roster features lone senior Roderick McCobb who is eligible to return for another year due to NCAA COVID-19 regulations. If he returns, the team will feature 10 upperclassmen and several talented sophomores who received minutes.

Northern Colorado built a “true brotherhood” this year, as Kountz said, and it looks forward to year two under Smiley’s leadership.

“I want us to not be judged by the record but by how we played this season,” Hume said. “For us, you can look at our record and say, ‘Oh wow, they had a rough year.’ But if you look at the scores of those games, they’re close. We’re on the edge of something really spectacular. I would tell everyone they should be really excited for next year.

How safe do YOU feel at night? Seven female writers share their views