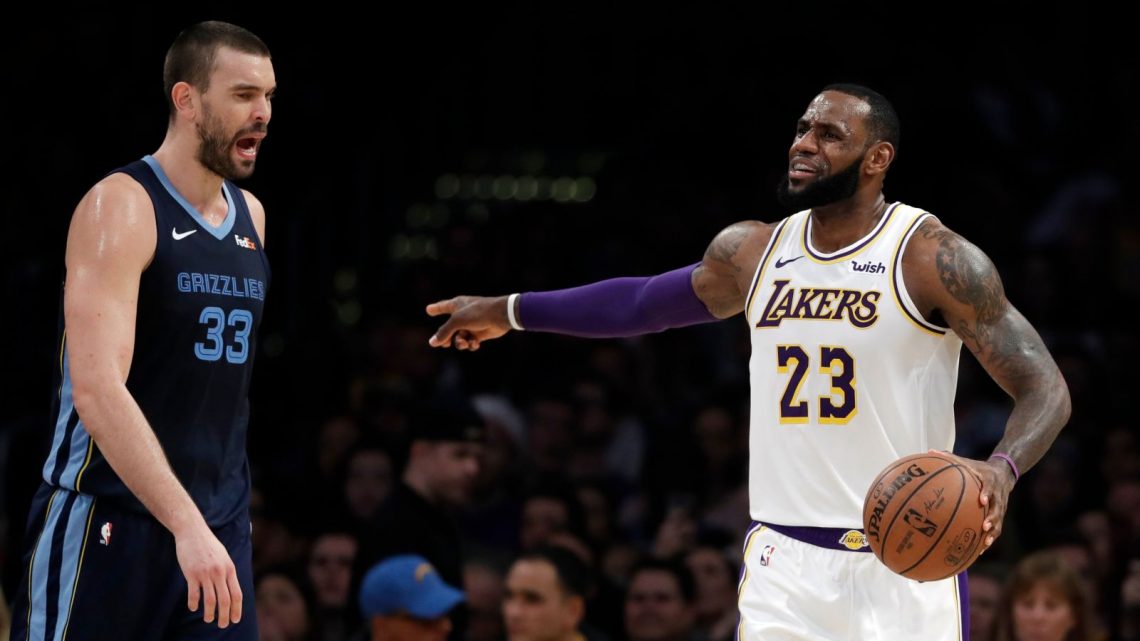 Trade Marc Gasol To The Lakers

The Memphis Grizzlies are swan-diving at a high rate of speed to the bottom of the West, and according to ESPN’s Adrian Wojnarowski they’re finally ready to see about trading away the two aging faces of the franchise, guard Mike Conley and center Marc Gasol. The team would likely need to get a lot back for either player if it hopes to assuage a fanbase that came into this season with some not entirely unjustified hope and dearly loves both stars. All of that promises to be pretty tricky.

Conley is 31, has dealt with some major injuries in recent seasons, and his contract, which was at one point the biggest in league history, still has two more extremely expensive seasons on it after this one. On top of that, he plays at the NBA’s deepest position; few, if any, of the teams with significant enough playoff ambitions to be in the market for an expensive 31-year-old star have either the need or the room for another point guard in their rotations. (On the other hand, Conley makes so much sense as a member of the San Antonio Spurs that I had to double-check just now to make sure he wasn’t already there. It’s time to make good on those Tony Parker comparisons from, uh, literally a decade ago.) That said, Conley is still really good, and still playing very well.

Gasol might be even trickier. He’s older, at 33, has been dealing with a wide range of back and lower-body injuries for years, and can either opt into free agency this coming summer (not very appealing to certain potential suitors) or opt into one more very expensive season on his current contract (not very appealing to certain other potential suitors, or to anyone if his spine melts between now and July). More urgently, his performance has tumbled over a cliff this season. Also, at least according to abundant rumor, Gasol flexed his organizational clout to get Grizzlies coach David Fizdale fired last season, which one could imagine giving pause to prospective future employers. It seems very likely that he will only ever be able to approximate the player he used to be in severely limited use—say, as a 24-minutes-a-night guy off the bench. It’s quite possible, maybe even likely, that Gasol’s sentimental value to Grizzlies fans far outstrips his actual basketball value to pretty much any other team, at this point.

The Los Angeles Lakers should trade for his ass!

Look, man. What good is being by far the NBA’s richest, most glamorous, most magnetic franchise if you can’t dump some promising but unproven young players for an eroded 33-year-old short-timer deep into the downslope of his career just because he might make a fun pairing with LeBron James for, at most, two postseason runs? Come on! Picture Gasol and LeBron teaming up on wily, cool Old Man stuff on screens and at the elbow and then taking that weird crap into the playoffs, possibly even against the Warriors or Rockets, and then tell me that isn’t more appealing than waiting around for Lonzo Ball to learn how to shoot like a moderately polished 11th-grader someday. Picture a three-man center rotation of Washed Marc Gasol, Washed Tyson Chandler, and Washed JaVale McGee, and tell me that’s not infinitely more exciting than spending the next two seasons trying to convince yourself that Brandon Ingram looks like Kevin Durant when you squint extremely hard.

You can’t! Because actually this is a good-ass idea (and for the lesser reason that I will delete your comment if you disagree)!!!

Some kind of Gasol-to-the-Lakers-for-some-quantity-of-their-young-punks trade makes sense for the Grizzlies, too. I know the bloom has come way off Lonzo’s rose, but if you remove the expectations implied by the second overall pick the Lakers used to nab him, he’s a big, athletic, and still super-young guard who has rounded into a fine defender and is already one of the game’s better and more creative passers. Sure, he’s a complete wreck as a scorer, but that’s why he’s being traded—in this scenario and almost certainly only in this scenario—for a broken-down old 33-year-old with hip and back problems. Pair Lonzo with the extremely exciting Jaren Jackson, Jr. and that’s a youthful tandem Grizzlies fans can get excited about. Or hell, do it with Ingram instead. I don’t give a damn!!!

The Lakers would feel awfully stupid if Lonzo or Ingram turned out to be a superstar and all they got for them was a washed center, you are saying. True! But being the Lakers means not really having to—or maybe not being able to—care all that much about that sort of thing. That’s why they gave a four-year contract to LeBron James right before he turned 34 years old. They’re the Lakers. Brandon Ingram can go to Memphis and turn into George Gervin With Three-Point Range… and then the Lakers can just sign him back in a few years, because they’re the damn Lakers. In the meantime, they can shoot their shot with LeBron and Marc Gasol and a few three-point bombers to take advantage of all the slick passes those two will throw. (Like Kyle Kuzma, who is the coolest and best of the Lakers’ young dudes anyway, and whom they should keep at all costs.)

I will not lie to you, my friends. I am not even going to attempt to perform the cap-ology required to discern how/whether these trade ideas could work according to the league’s rules. That is for someone else to figure out. For example, the front-office executives of the Memphis Grizzlies and Los Angeles Lakers! What I am saying here is that they damn well oughtta make it frickin’ happen. Get to work!