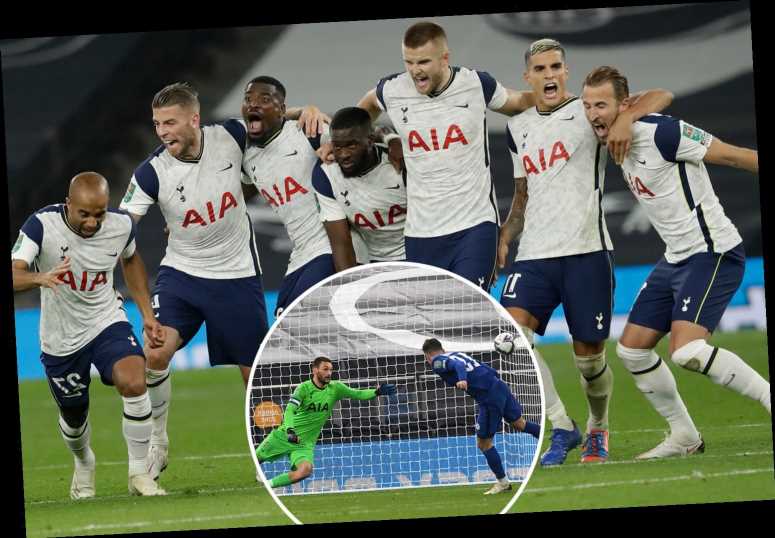 HE was serious, all right, Old Sulky Chops in the Tottenham dugout.

Jose Mourinho might have claimed he was going to jock off the Carabao Cup due to Tottenham’s acute fixture congestion. 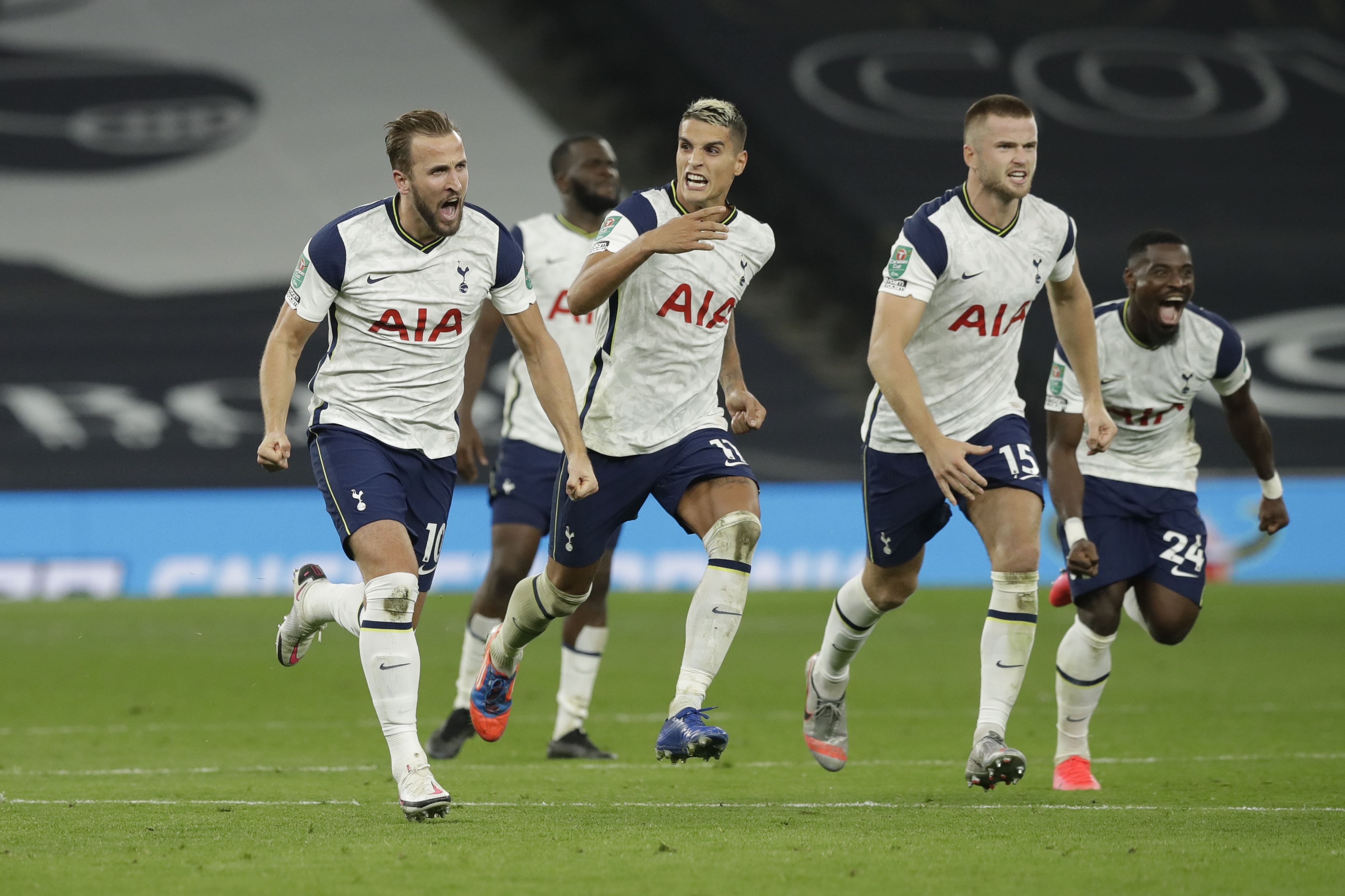 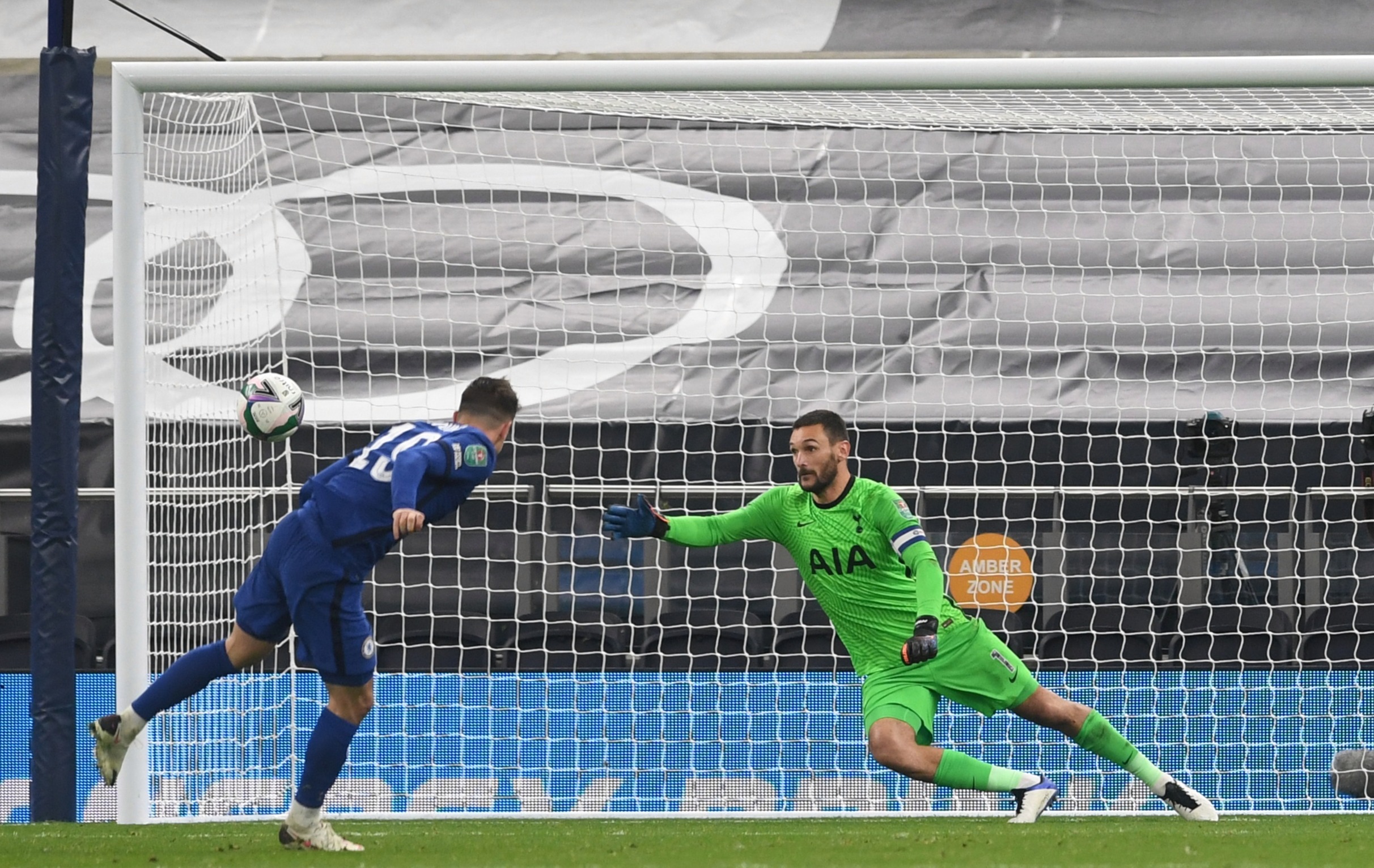 But he sent out an experienced Tottenham team, who produced an outstanding second-half performance, equalised late and won a tense, silent penalty shoot-out when Mason Mount missed the decisive spot-kick for Chelsea.

Spurs had been offered the shortest ever route to a major Wembley final – just three wins required after Leyton Orient’s sicknote earned them a bye in the third round.

And if you believed Mourinho they weren’t even going to have a serious go at defeating Chelsea.

But don’t you ever believe the Portuguese rascal. This was vintage Mourinho – rope-a-dope defending followed by a strong finish.

It was a bitter blow for Chelsea boss Frank Lampard, whose side lost the FA Cup Final to Arsenal last month and have blown another trophy shot already.

With Maccabi Haifa coming up in the Europa League on Thursday, Mourinho has been having a public tizzy about fixture chaos and an apparent lack of resources, which continued in his pre-match TV interview.

"Who is going to play up front? Nobody. We don't have anybody," he scowled.

Although Harry Kane was on the bench, along with Lucas Moura, who scored a Champions League semi-final hat-trick last year – and both were sent on in the final stages to score shoot-out penalties. 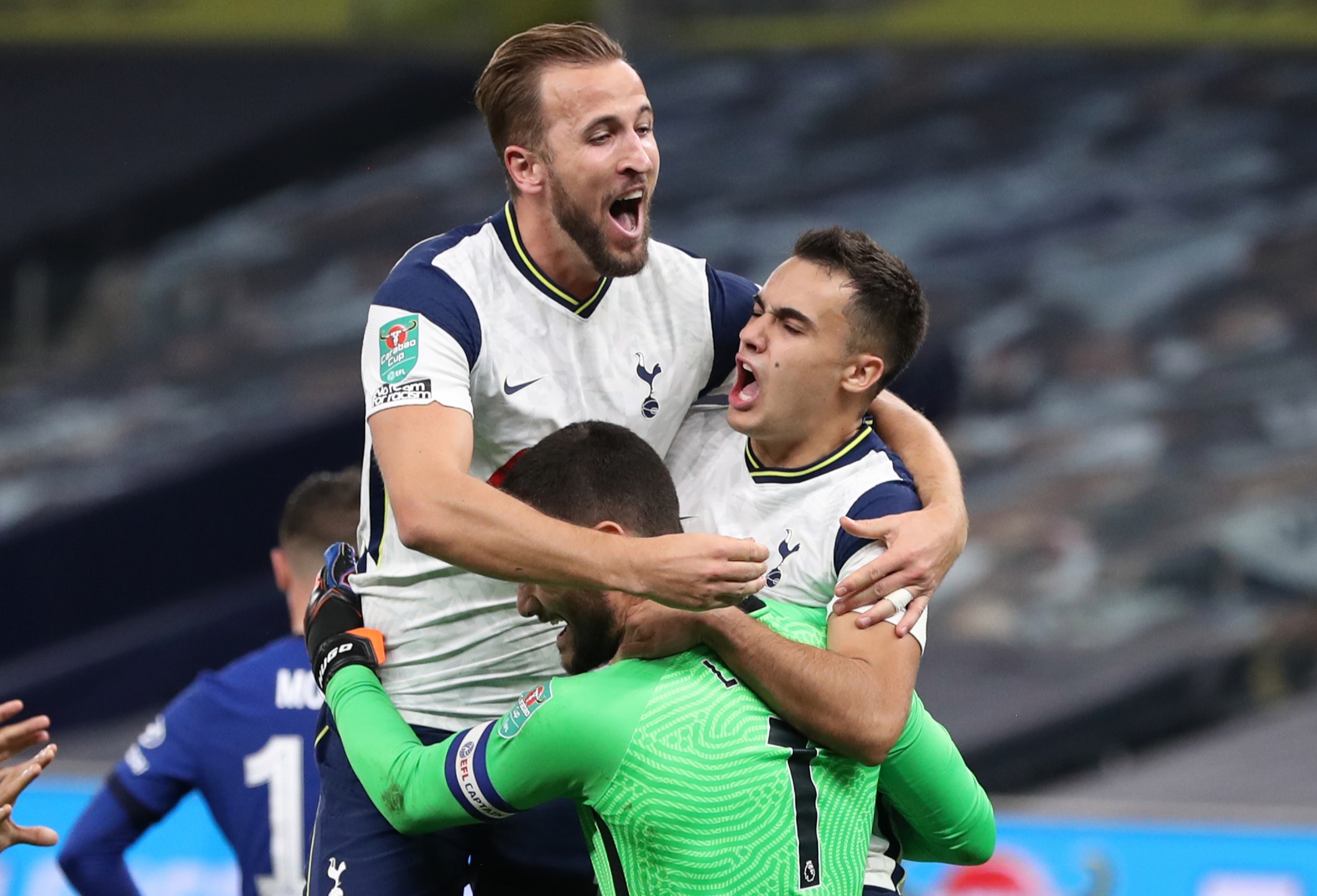 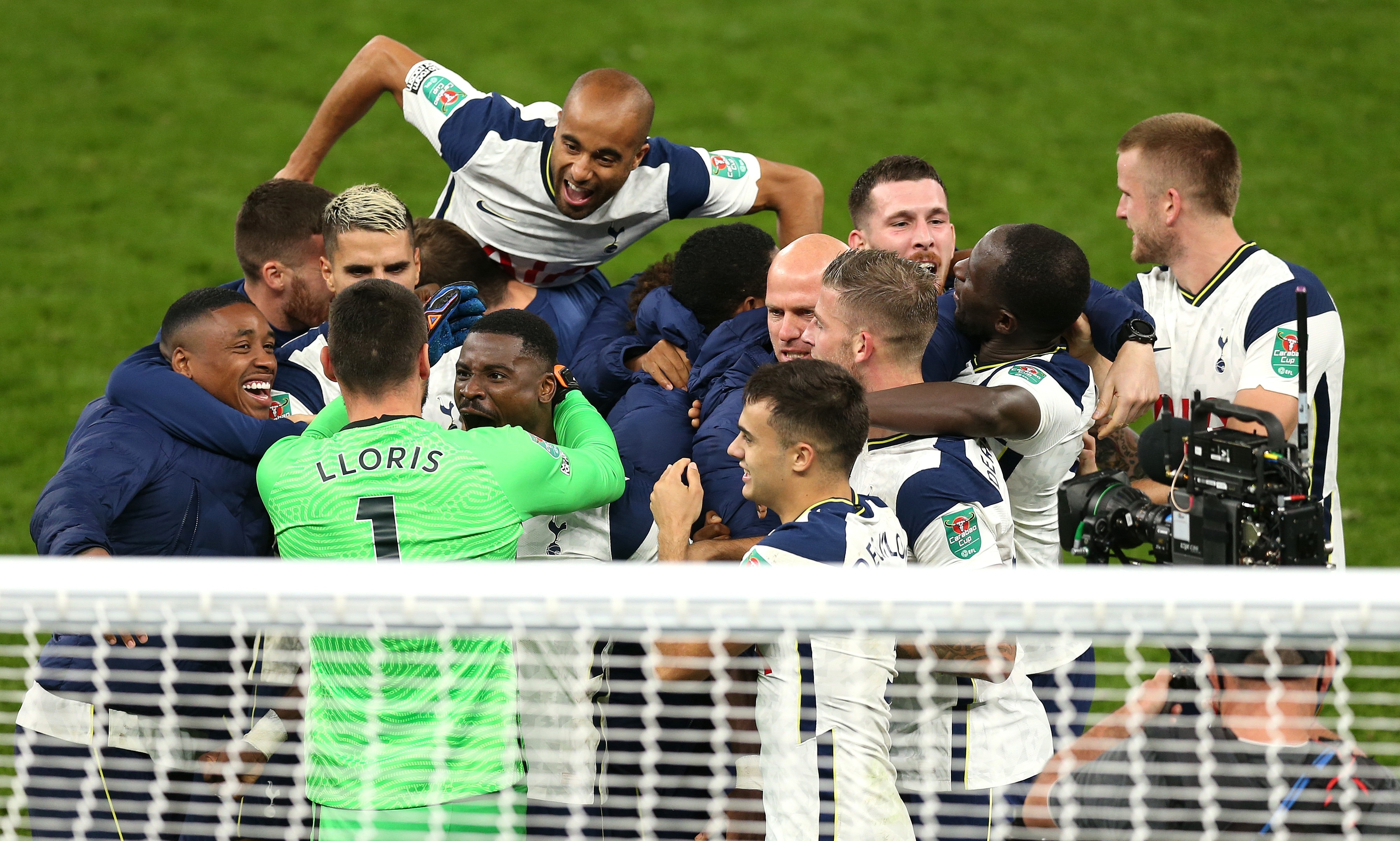 Even with nine changes this was always a line-up capable of getting a result – Mourinho’s squad is not as shallow as he sometimes makes out.

Chelsea boss Lampard knows Mourinho’s mindgames better than most and insisted he was not fooled by them.

Lampard had won all three of his previous meetings with his one-time mentor – a league double over Spurs last season and a victory with Derby against Mourinho’s Manchester United in this competition.

The Chelsea boss gave a debut to keeper Edouard Mendy and a first start to Ben Chilwell.

And after 18 minutes of Chelsea passing the ball to and fro, into midfield and backwards again, with more than 80 per cent possession, the visitors scored. 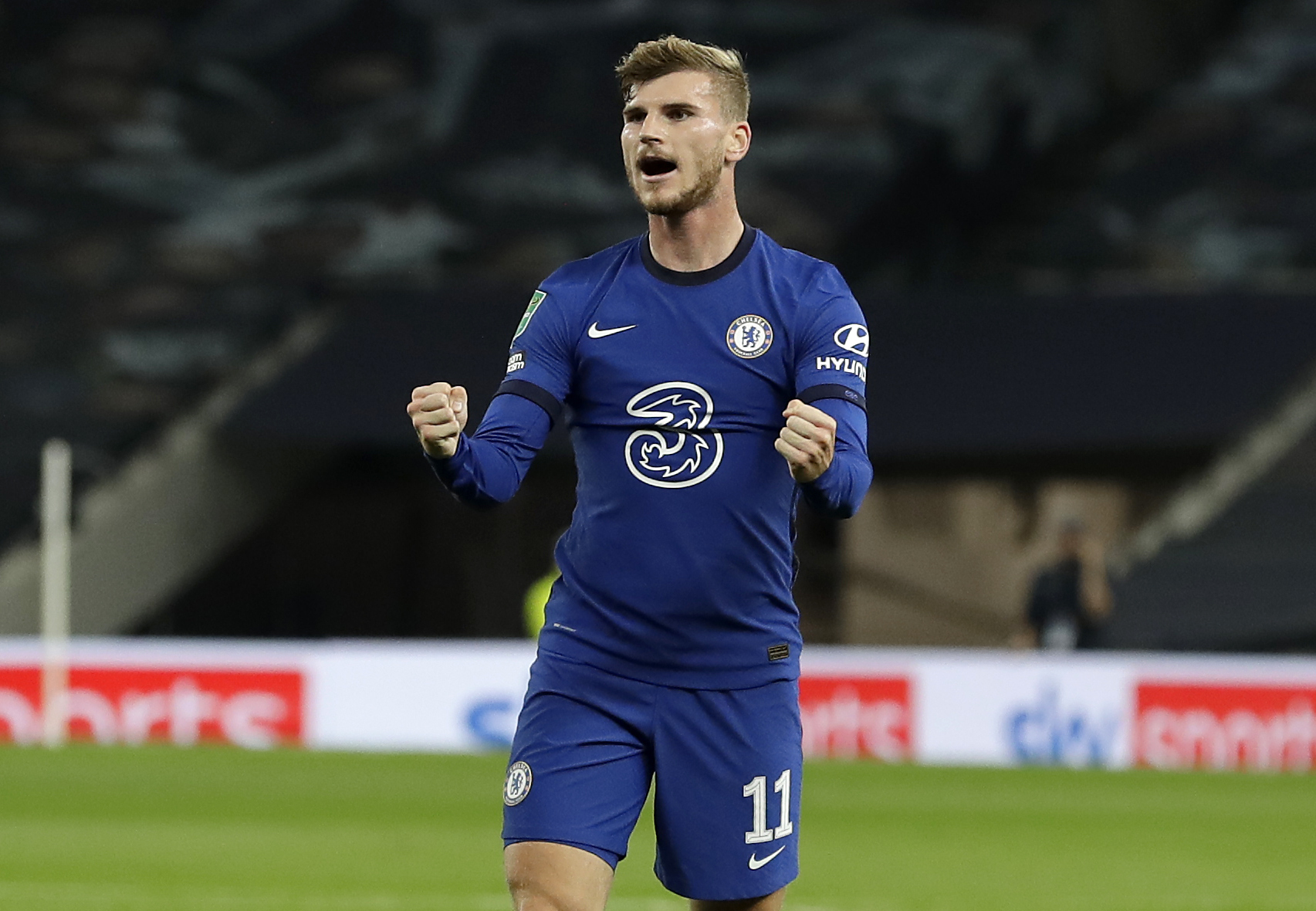 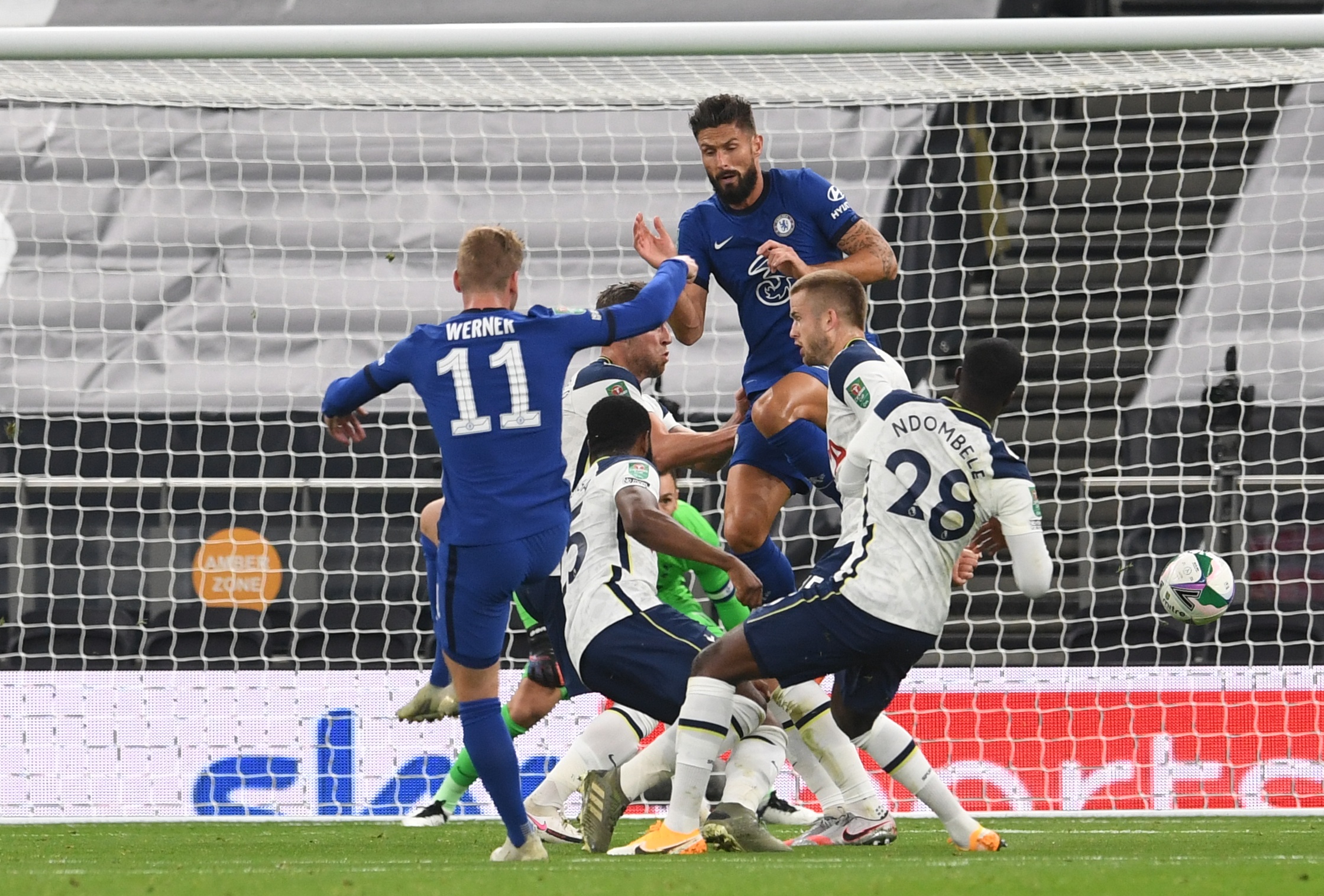 It was a disaster for Reguilon who lost the ball to Azpilicueta in midfield and when the Chelsea skipper received it back from Callum Hudson-Odoi, the Spurs debutant was sent to the nachos stand by Azpilicueta doing little more than standing still.

Azpilicueta had the time to square to Werner, who rammed past Hugo Lloris.

Spurs then seemed to decide that having the football might help and soon almost equalised.

With Chelsea’s defence having one of their customary Nanna naps, Gedson Fernandes snuck in behind Kurt Zouma, who produced an excellent recovery tackle in the last ditch.

Then, a wonderful little touchline spat between the two managers – a stoppage in play annoyed Mourinho, who started at fourth official Andre Marriner. 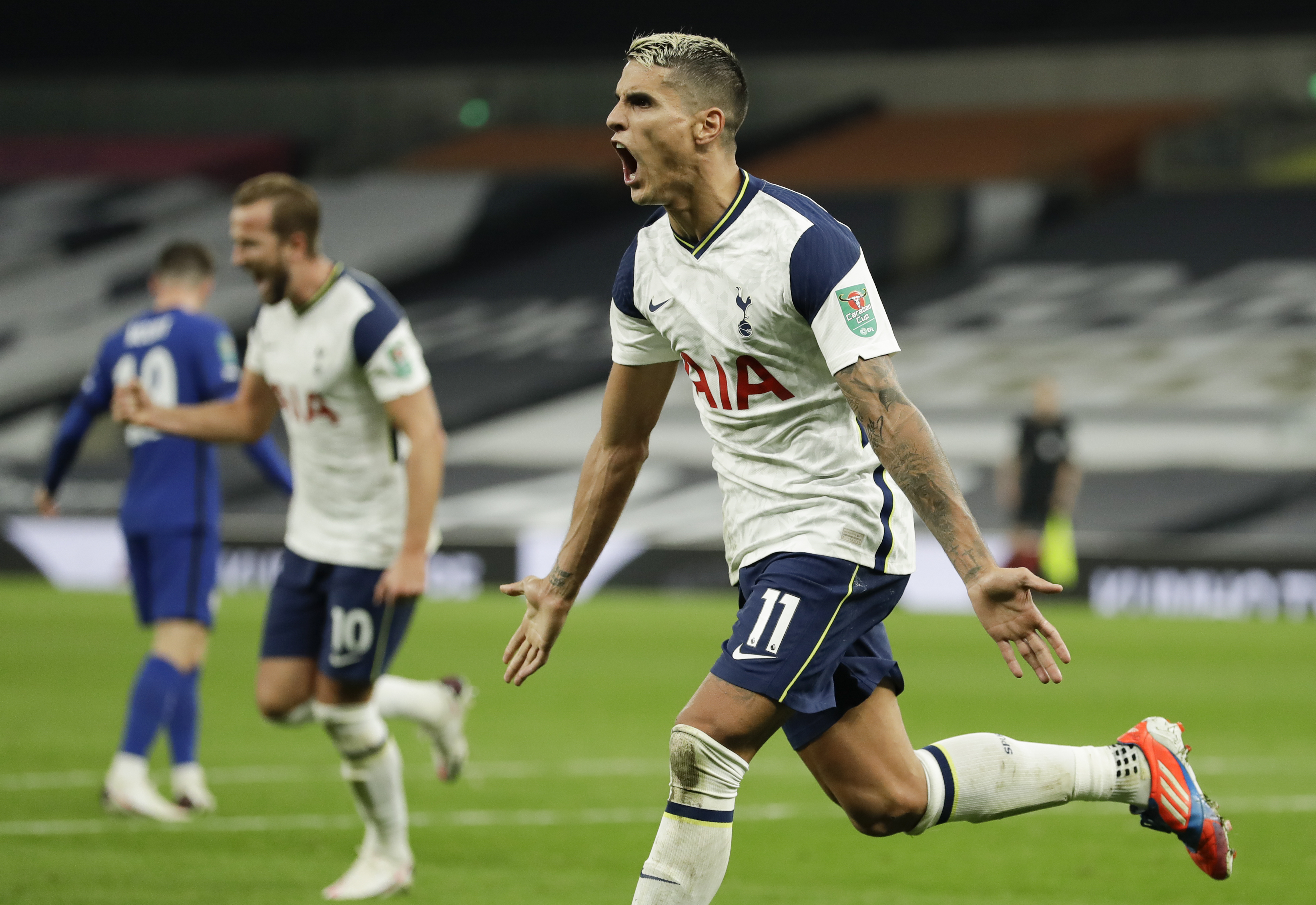 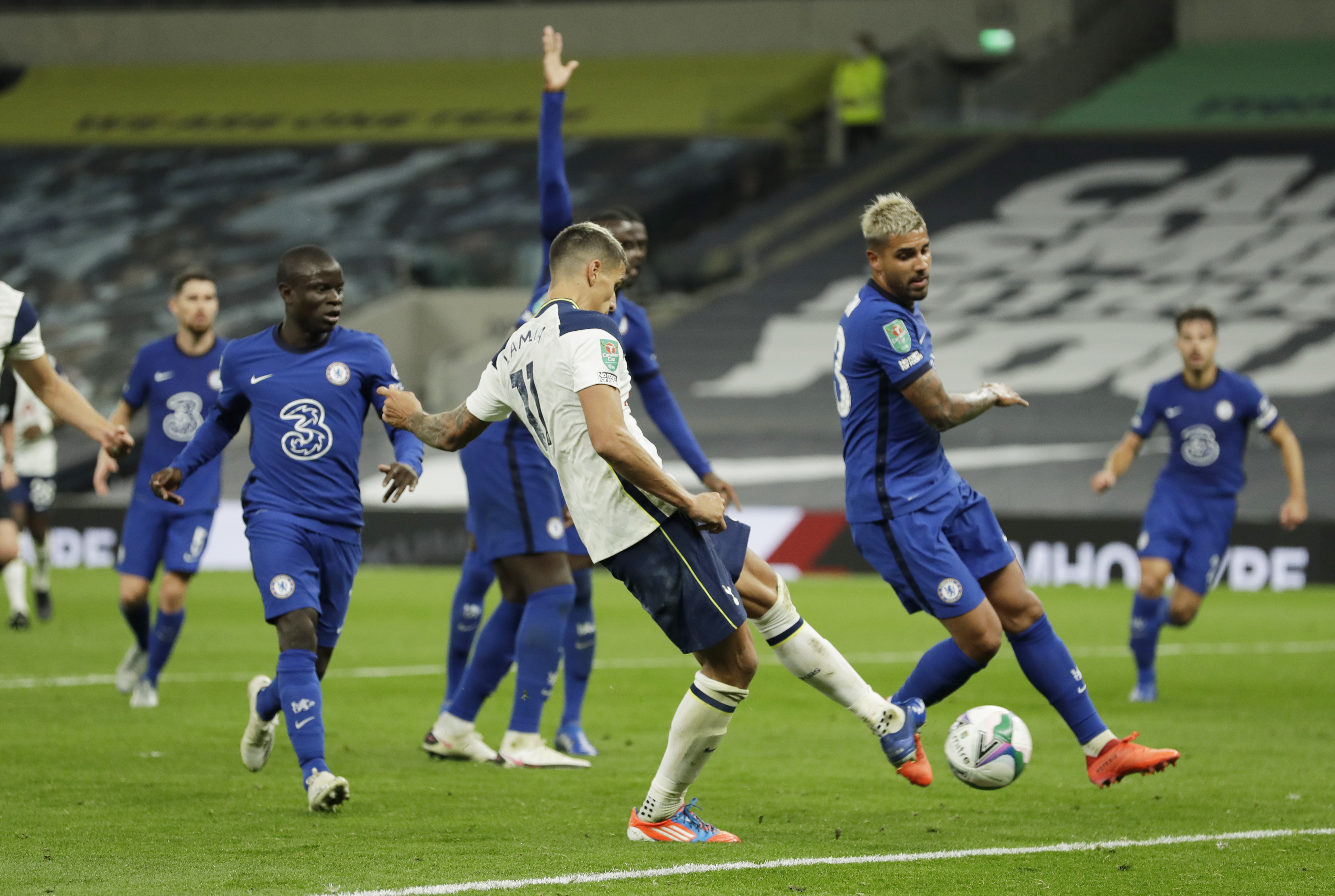 He then suggested that when Chelsea were 3-0 down at West Brom on Saturday, the Blues boss had been conspicuously absent from his technical area.

Whatever happened to the old bromance? That famous shower scene, when Jose told a naked Frank he was the dog’s conkers.

In truth, there has been little love between them since Lampard left Mourinho’s Chelsea, apparently for Major League Soccer, only to turn up at Manchester City.

Spurs were discovering impetus and Erik Lamela, one of Mourinho’s two ‘false nines’, performed a neat swivel and a shot which Mendy saved with his legs.

Spurs started the second half like a train and Reguilon came close to making amends when Aurier picked him out in space, yet Mendy pushed the Spaniard’s drive over the bar.

The Senegalese certainly looks an upgrade on Kepa Arrizabalaga – though perhaps not as good as the last keeper Chelsea signed from Rennes, Petr Cech. 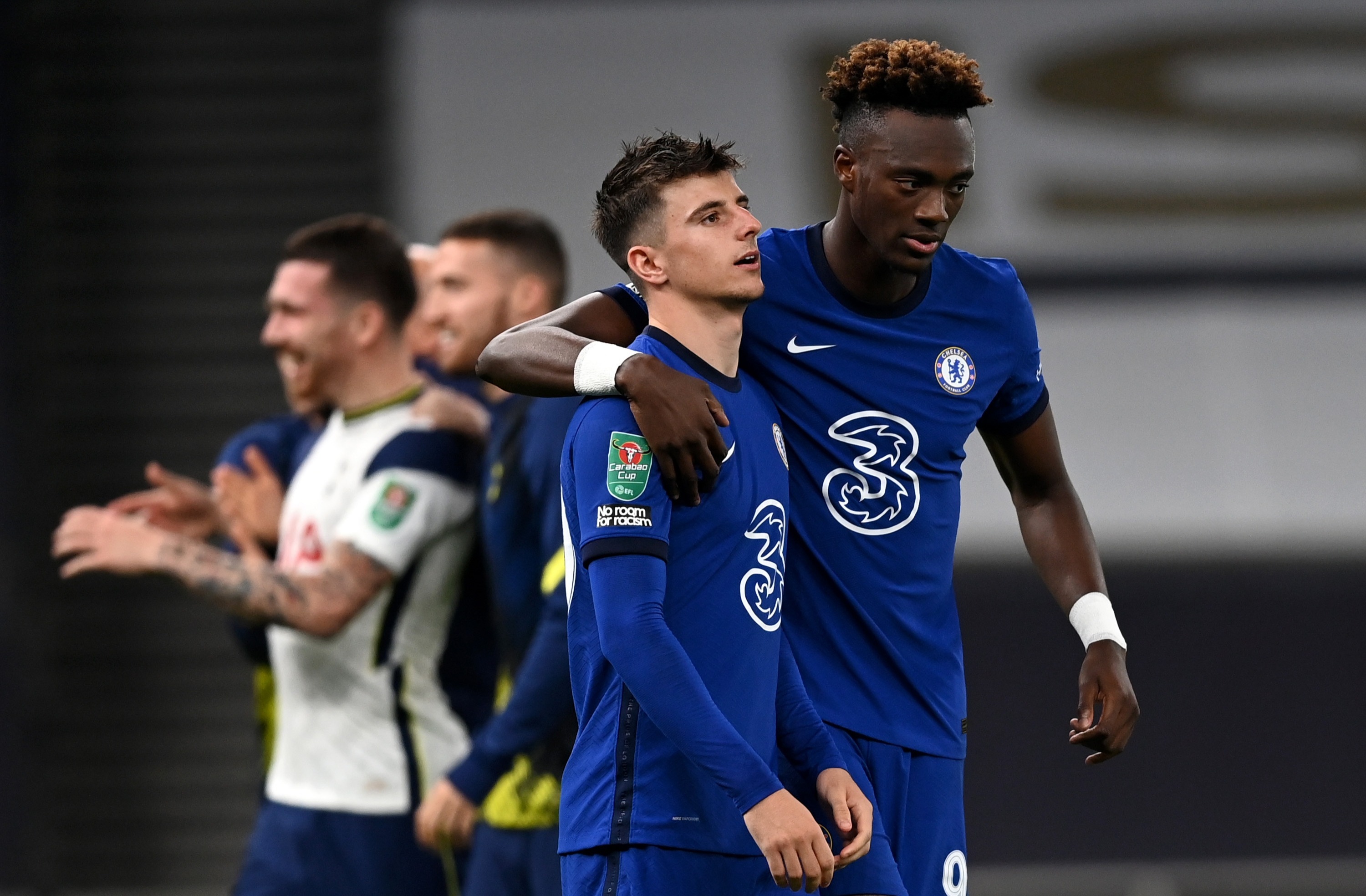 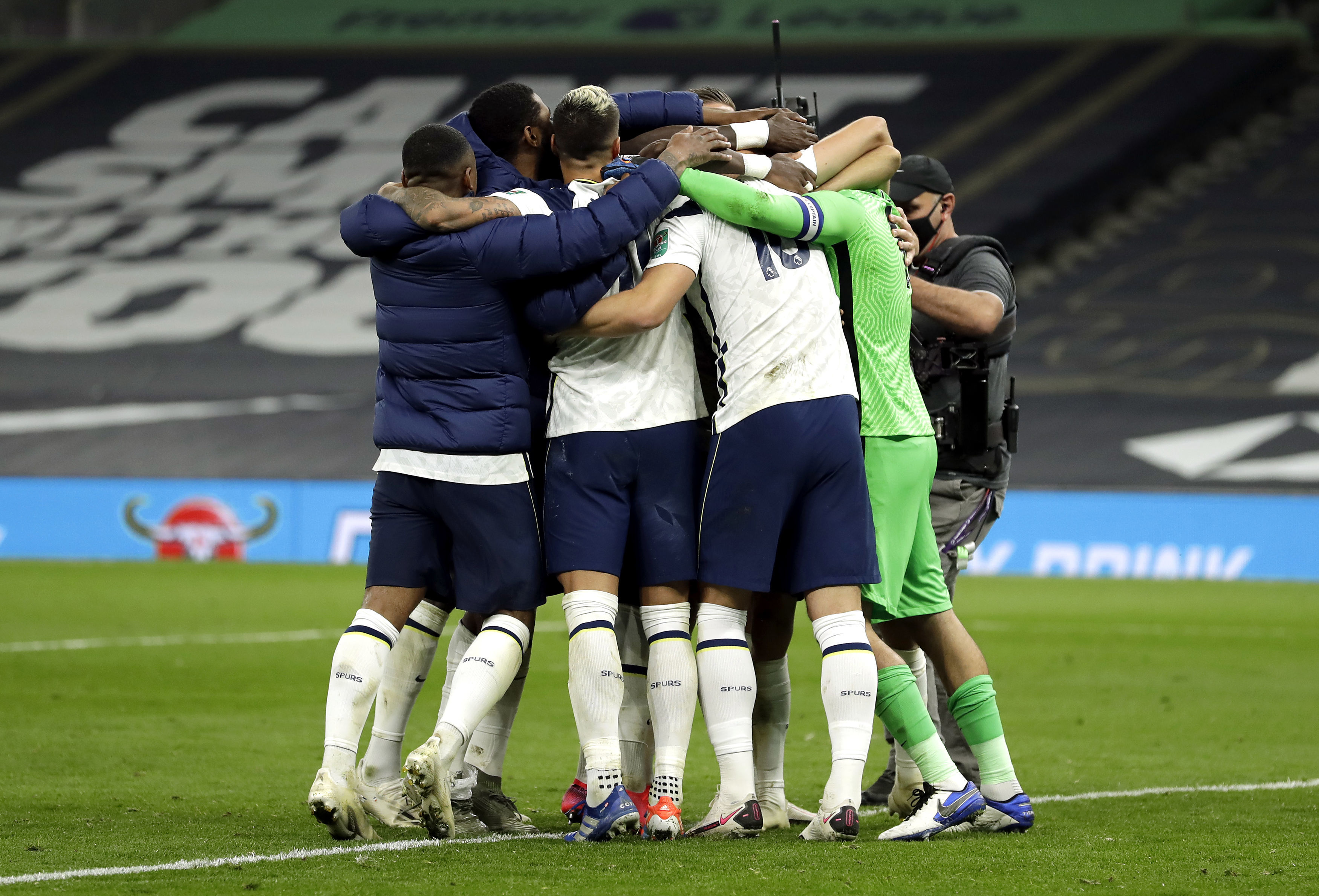 With Spurs swarming, Steven Bergwijn – Mourinho’s second ‘falsie’ – went close and then had a decent penalty shout against Ben Chilwell turned down by Lee Mason.

Without VAR, they all just got on with playing football – and where’s the fun in that?

With 20 minutes remaining, Mourinho sent on Kane and switched to a flat back four, in the closest he ever gets to tossing caution to the breeze.

But it was Chelsea sub N’Golo Kane who made an instant impact winning the tackle of the night high up the pitch, allowing Werner to test Lloris with a stinging shot.

With Spurs having used al three subs, Eric Dier suddenly dashed down the tunnel – presumably for a loo break – with Mourinho in hot pursuit and Lloris yelling ‘what the **** is going on?’

But with Dier restored, Spurs continued to press and they grabbed a deserved equaliser on 84 minutes, Reguilon teasing his way down the left and centring for Lamela to prod home with Kurt Zouma and Emerson seemingly switched off.

Then the penalties – nine perfect efforts, followed by Mount hitting the outside of the post, with Mourinho cavorting straight down the tunnel in euphoria.