Home » Sport » Tiger Woods was conscious and talking after the crash, the authorities said. 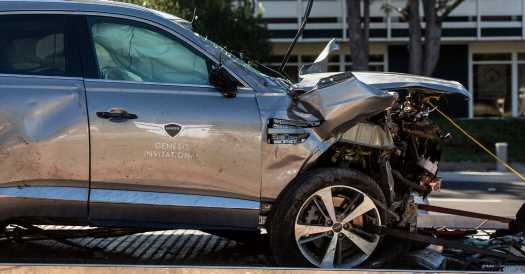 Tiger Woods was conscious and talking after the crash, the authorities said.

Tiger Woods sustained serious leg injuries on Tuesday after the luxury S.U.V. he was driving struck the median of a road in Los Angeles County, crossed over into the opposite lane of traffic and rolled over several times before coming to a stop in a grassy area several hundred feet from where he had been driving, the authorities said.

Emergency workers rushed to the scene just after 7 a.m. Pacific time and took Woods, 45, to the closest trauma center, where the golfer’s manager said he had gone into surgery. The authorities said that Woods was in serious but stable condition at Harbor-U.C.L.A. Medical Center, and that his injuries did not appear to be life-threatening. Daryl L. Osby, the chief of the Los Angeles County Fire Department, said on CNN that Woods had “broken bones in both his legs.”

Woods was conscious and able to speak to deputies when they arrived, giving them his name and appearing “lucid and calm,” said Deputy Carlos Gonzalez, who was the first officer on the scene. Woods was not able to stand on his own because of his injuries, Deputy Gonzalez said.

Woods was driving near the border of Rolling Hills Estates and Rancho Palos Verdes and was heading downhill along a road where people often drive over the 45 m.p.h. speed limit, Sheriff Alex Villanueva of the Los Angeles County Sheriff’s Department said at a news conference.

Sheriff Villanueva said only that Woods appeared to be driving at a “greater speed than normal” and that he did not seem to be impaired by drugs or alcohol. He added that because Woods did not seem impaired, “there was no effort to draw blood, for example, at the hospital.”

The sheriff said it was not yet clear what had caused the crash. No other vehicles were struck, and there were no skid marks at the scene, he said.

Mark Steinberg, Woods’s longtime agent, said in a statement around noon that the golfer was “currently in surgery,” adding: “We thank you for your privacy and support.” 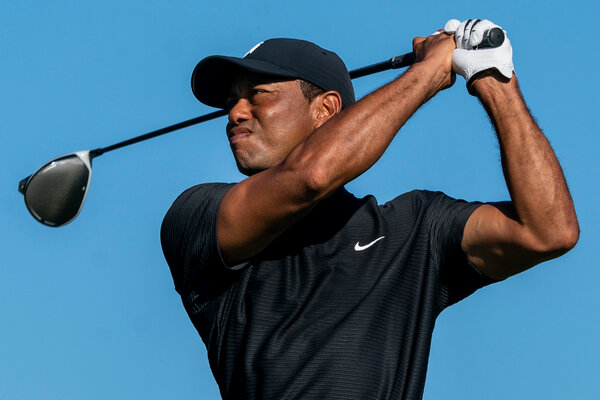 Deputy Gonzalez said that when he arrived on the scene, Woods did not initially appear to be too worried about his injuries, which the officer said was common with crashes when people are in shock. He said that Woods was wearing his seatbelt and that the airbags on his S.U.V. deployed.

“He told me his name was Tiger, and at that moment, I immediately recognized him,” Deputy Gonzalez said at the news conference.

Woods was driving a Genesis S.U.V., which is made by Hyundai's luxury division. Last weekend, he hosted a PGA Tour event at Riviera Country Club in Southern California, the Genesis Invitational, which is sponsored by the car division. Riviera is where he made his PGA Tour debut in 1992.

Woods’s vehicle was traveling north on Hawthorne Boulevard at the intersection of Blackhorse Road when it crashed, striking a “Welcome to Rolling Hills Estates” sign and hitting a tree as it rolled over, Villanueva said.

Video from local television stations showed Woods’s vehicle on its side in an open, grassy area, with its hood crumpled and its windshield broken.

The Sheriff’s Department initially said Woods had been removed from the vehicle with hydraulic tools collectively known as “Jaws of Life,” but fire officials later said that the tools were not used. Osby, the fire chief, said rescuers had used an ax, among other tools, to get Woods out of the S.U.V.

Tiger Woods Was Conscious When Authorities Arrived at Crash

Tiger Woods, who sustained serious leg injuries after crashing his S.U.V. on Tuesday in Los Angeles County, was conscious when emergency workers arrived, the authorities said.

“Today at 7:12 in the morning, Lomita Sheriff’s Station received a call of a solo vehicle collision in Harbor, or Hawthorne Boulevard, north of Palos Verdes Drive. We arrived on the scene at 7:18 a.m. and discovered this solo vehicle collision. And the sole occupant was, again, Tiger Woods. And deputies at the time, they did not see any evidence of impairment, anything that of concern — obviously, the lifesaving measures that had to be taken for the occupant in the vehicle. The vehicle traveled several hundred feet from the center, center divider at the intersection and rested on the west side of the road in the brush, sustained major damage, the vehicle, you’ve seen all the images of that.” “Resources and personnel from the Los Angeles County Fire Department observed a single rollover vehicle incident with one person trapped. The person trapped was extricated by the Los Angeles County Fire Department personnel. The person was packaged at the incident in stable condition with serious injuries, and because of the fact that they needed to be extricated, they were transported to Harbor U.C.L.A. Hospital. It was brought to my attention that he was conscious. Now, exactly what was said is unknown, but he was conscious.” 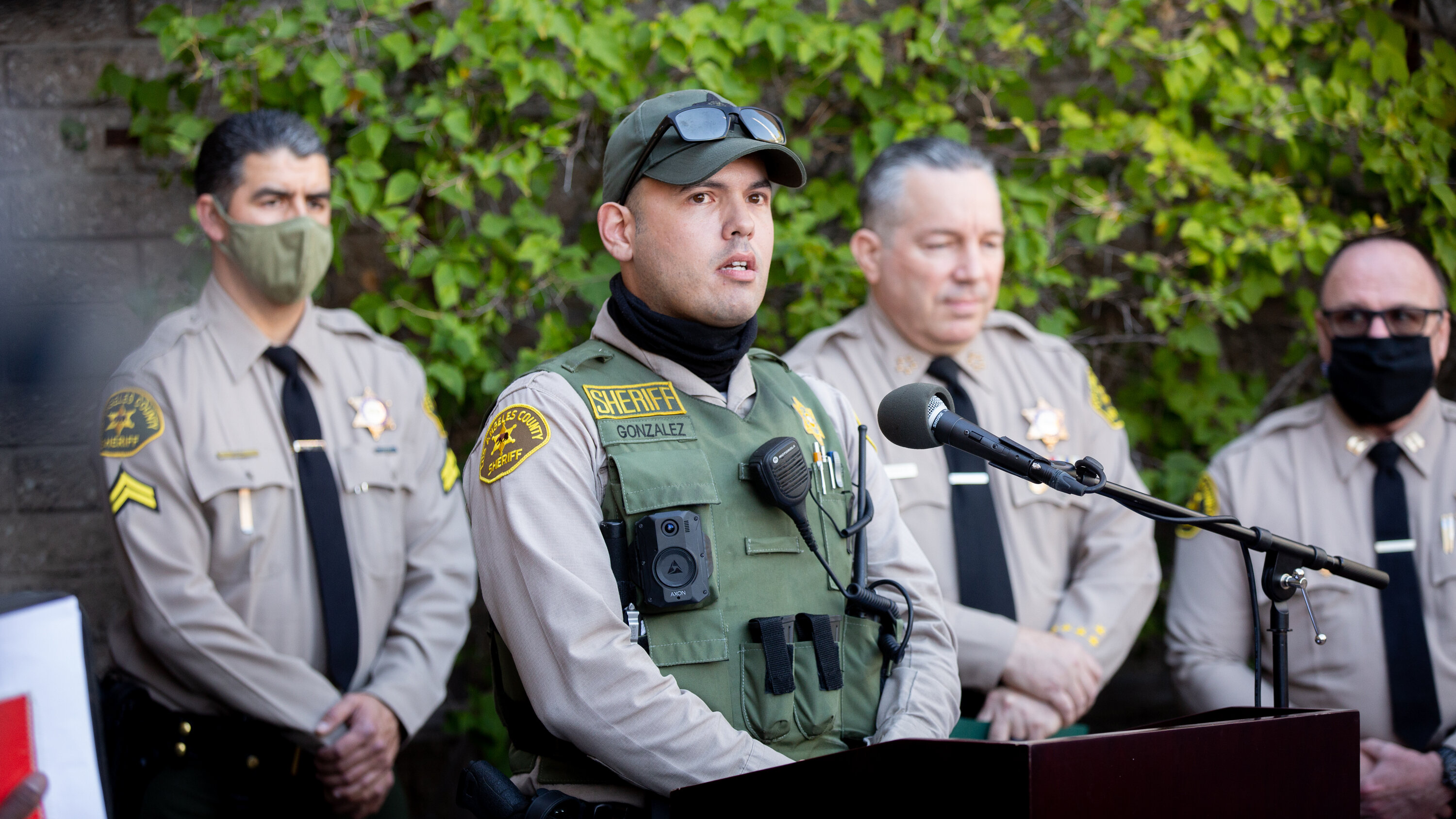 Chief Osby said that Woods had been placed on a seat with a backboard as a standard precaution after serious crashes, in case of possible spinal injuries.

Woods has not played competitively since December, and he had his fifth back operation in January, a procedure called a microdiscectomy, to remove a pressurized disc fragment that was pinching a nerve. Interviewed on the broadcast of the Genesis Invitational, Woods said he had begun practicing again, and he appeared at ease, smiling and joking with CBS announcers about his progress from the surgery. But he offered no timetable for his return to competitive golf.

He said only that he had hoped to resume playing by the Masters Tournament, which is held in the first full week of April.

On Monday, at an event at the Rolling Hills Country Club near Los Angeles, pictures on social media showed Woods happily interacting with various celebrities, including the N.B.A. player Dwyane Wade. During the function, Woods gave golf tips and limited instruction but was not swinging a golf club.