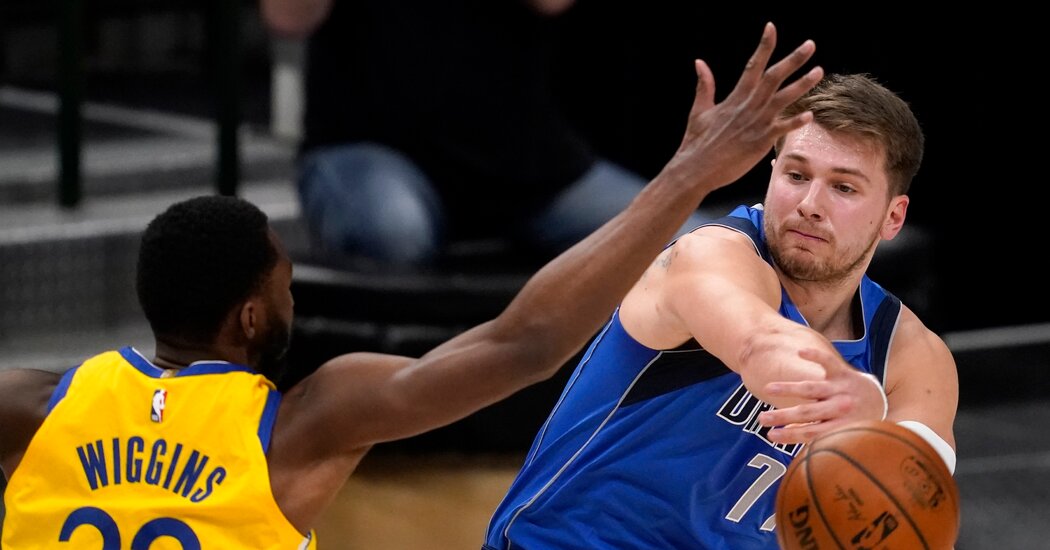 ‘This Is Larry Bird Reincarnated’

Cedric Maxwell played for six seasons and won two championships alongside Larry Bird in Boston. He was named the most valuable player of the N.B.A. finals in 1981. So you listen intently when someone like Maxwell refers to Bird in assessing the Dallas Mavericks’ Luka Doncic.

“You can quote me: This is Larry Bird reincarnated,” Maxwell said.

Maxwell told me this last August, after watching Doncic beat the Los Angeles Clippers in the playoffs with an icy 3-pointer at the overtime buzzer that has been replayed over and over. He said it again this week as he prepared for a radio broadcast of the Celtics’ game on Tuesday at Dallas — before Doncic beat Boston with two 3-point daggers in the final minute of the Mavericks’ 110-107 victory.

“This would be Larry Bird of the 2020s,” Maxwell said, “exactly how he would play now.”

Maxwell’s latter statement has been my primary interest in the relationship between these two whenever the subject comes up. As a child of the 1970s and ’80s, who romanticizes those days above all others in N.B.A. history, I like to imagine Bird dropping into today’s game somehow and playing Doncic-style — with the ball in his hands so much more to probe and create and the freedom to shoot 10 3-pointers per game.

In his 13 seasons with the Celtics, Bird averaged at least three 3-point attempts per game just three times. He was a true forward in a more bruising era, flanked in the Boston frontcourt by the larger Kevin McHale and Robert Parish. While Doncic, at 6-foot-7 and 230 pounds, is built similarly to Bird (6-9, 220 pounds), he has been a triple-double-minded point guard almost from the minute he set foot in the Mavericks’ practice facility in September 2018.

Beyond positional differences, comparisons that measure on-the-rise prospects or even emerging greats like Doncic against one of the game’s giants are invariably tricky — no matter how seemingly common it has become to link white players to Bird. Making such comparisons is one of the most instinctual aspects of basketball fandom and, at the same time, that reflex can put too much focus on the immeasurable. For all the similarities you can see in their ability to pass, rebound, shoot from distance and control the game, Doncic and Bird are limited edition, one-of-one originals.

Yet Maxwell has a gift for making convincing cases. I am stubbornly measured and tend to resist the comparison game. He’s no holds barred and inevitably made me curious. Denver’s Nikola Jokic is another rising franchise player who is often likened to Bird, but Maxwell leaned into the notion that Doncic “is a carbon copy of Larry.” After an association with the N.B.A. that has spanned more than 40 years, he maintains that “comparison is good” — daunting (and downright damaging) as it has been for too many failed Next Jordans to list.

“Luka is better than Larry was at that age,” Maxwell said of Doncic, who turns 22 on Sunday. “The biggest thing is that there’s an arrogance, a cockiness, that Luka has that is directly out of the bloodstream of Larry Bird.”

Doncic turned pro at 16 with the Spanish power Real Madrid, where he developed that maturity beyond his years. Bird was 22 when he scored 14 points in his N.B.A. debut.

Another key contrast: Doncic didn’t land with a franchise as close to title contention as Bird and, in Year 3, finds himself in his most challenging stretch since he reached the N.B.A.

After the buzzer-beater that toppled the Clippers and so much more from Doncic in last summer’s bubble at Walt Disney World, he began the season among the favorites for Most Valuable Player Award honors, with Dallas similarly expected to push for a top-four seed in the West. At just 15-15 after Tuesday’s victory, Doncic’s Mavericks would probably be branded the league’s most disappointing team if not for the Celtics, who are 15-16 after blowing a 24-point lead on Sunday in New Orleans and then losing to Dallas.

Doncic remains as brilliant as ever, averaging 28.9 points, 8.6 rebounds and 9.2 assists per game, but numerous issues recently dragged the Mavericks into a 3-10 funk. They made improvement on defense an off-season priority and promptly tumbled to 25th in the league in defensive efficiency. They have slumped to 24th in 3-point shooting. There have been numerous coronavirus-related lineup disruptions: Four key rotation players not named Doncic (Kristaps Porzingis, Josh Richardson, Dorian Finney-Smith and Maxi Kleber) have missed at least nine games each. Porzingis’s mobility after off-season knee surgery has been slow to reload, especially defensively, and the team misses the chemistry influence of the veteran J.J. Barea, who now plays in Spain.

At the Mavericks’ low point, they had lost 12 consecutive one-possession games before Doncic and Golden State’s Stephen Curry staged an irresistible duel on Feb. 6 from which Dallas escaped with a 134-132 victory. Doncic said afterward that it was the first time in a long time that he played with sufficient joy and said he needed “to have more fun playing the game to be who I was before.” The win launched a promising 4-1 surge before the Mavericks were forced into a week off by a horrendous winter storm that ravaged Texas for days.

Doncic’s body language and complaints to referees have been talking points all season. He acknowledged in a recent interview with ESPN’s Stephen A. Smith that he has to improve his deportment with officials, saying that losing “makes you do things you don’t want to do.” Doncic said last week that Portland’s Damian Lillard, whose team has exceeded expectations despite key injuries, deserved a starting spot in the All-Star Game “more than me.”

Yet even if they get it right, that will demand more from their centerpiece.

“Larry had another gear that I’m waiting to see Luka come up with, and that’s the leadership role,” Maxwell said. 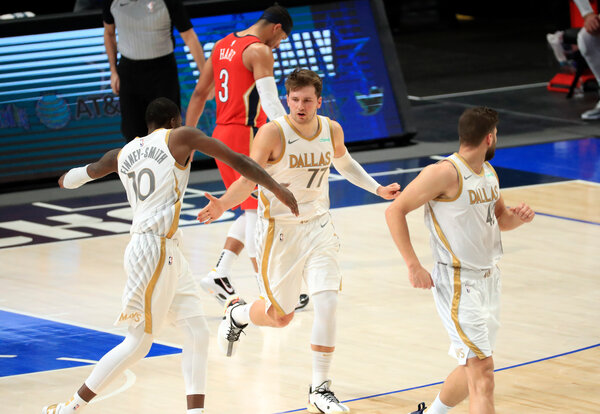 Doncic, of course, is not even the first Maverick from Europe to be relentlessly compared to Bird. Dirk Nowitzki, who changed the power forward position forever with his ability to face the basket, shoot the 3-pointer with ease and draw big men out of the paint, was described for two decades as a 7-foot Bird.

“I was always super humbled and honored to be compared to Larry Legend, but I never tried to think about it that much,” Nowitzki said Monday. “I never tried to live up to his career and put pressure on myself that way. I tried to focus more on paving my own way and finding what works for me.”

Doncic is equally modest when reporters bring up Bird or other well-known players he has passed on his way to tie for No. 12 in career triple-doubles (32). He naturally wants to be his own man and leave his own legacy. But this is basketball. Resistance is futile because comparisons are what we do — constantly.

The season was one game old when Maxwell got swept up in Luka mania. After a cheeky Doncic assist in the paint to Finney-Smith that flummoxed Phoenix’s Deandre Ayton and the rest of the Suns’ defense, Maxwell tweeted: “Hello Larry Joe Bird. Wow. I received one or two of those passes in my day.”

Because of travel restrictions for N.B.A. broadcasters during the coronavirus pandemic, Maxwell was forced to call Tuesday’s game from afar alongside Sean Grande. They were in a studio in Boston when Doncic delivered those two very Bird-like clutch shots that made Maxwell look smart.

“When you go by one name, that tells you who you are in this league,” Maxwell said. “All you’ve got to say is Luka.”

On Friday, Milwaukee’s Jrue Holiday becomes eligible for a maximum contract extension worth $135 million over four years. The Bucks acquired Holiday from New Orleans in November in a trade that helped persuade Giannis Antetokounmpo to sign a five-year, $228 million extension in December, but Holiday’s importance has been no less apparent this month. Milwaukee recently lost five consecutive games while Holiday was sidelined by the league’s health and safety protocols to fall to No. 3 in the East.

Since joining the Nets, James Harden has clearly been trying to play the more well-rounded game many skeptics said he could no longer stomach. Harden leads the league at 11.1 assists per game and has taken 20 or more shots in just five of his first 18 games as a Net. He averaged at least 20 shots per game in each of his last three full seasons in Houston.

Jimmy Butler has missed 12 of Miami’s 31 games, which undoubtedly factored into Eastern Conference coaches deciding not to select him as an All-Star reserve. It was harsh to see the coaches go that route, given that Butler is averaging a robust 19.1 points, 7.6 rebounds and 7.6 assists per game when he does play. It was doubly so because Kevin Durant and Kyrie Irving, who were selected as starters through voting that includes fans, players and media members, have missed 14 (Durant) and 10 (Irving) of the Nets’ 33 games.

Utah’s Jordan Clarkson recently became just the seventh player since 1983-84 to record multiple 40-point games off the bench, according to Stathead. The Los Angeles Clippers’ Lou Williams tops the list with five, followed by J.R. Smith with three. Clarkson is the only active player besides Williams with at least two such games; Ben Gordon, Al Harrington, Nate Robinson and Nick Young are the others with two.

Arsenal captain Aubameyang has ‘lost his superpower’ and ‘past his best’, slams Jamie Redknapp after loss to Man City
World News