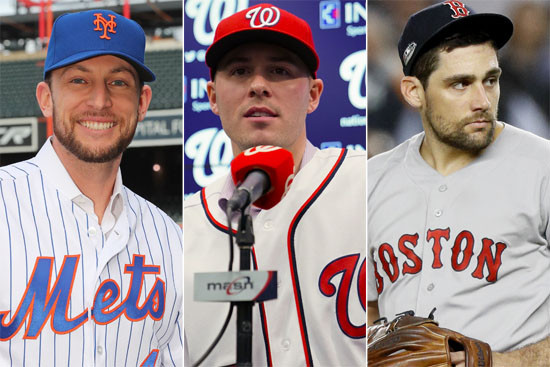 These teams’ offseasons will make them MLB lightning rods

Back in 2002, when Bud Selig pushed hard for (and eventually gained) revenue-sharing and luxury-tax concessions from the large-market clubs to aid the small-market clubs — concessions the Players Association had to approve via collective bargaining — the union found itself in the odd position of rooting for penny-pinching operations like the A’s and Twins. Selig rudely dismissed such successful teams as “aberrations” among the paupers, and the PA, not wanting to handcuff George Steinbrenner’s natural inclination to spend, offered Oakland and Minnesota as evidence the system of the time worked perfectly fine.

Fast-forward to now, with labor tension thriving in baseball, and you can bet your Bryce Harper and Manny Machado bobbleheads that the players and owners have already aligned themselves with … let’s call them side interests. Teams — and causes — they’ll furtively yet obviously support and oppose, respectfully, in order to promote their agendas.

No matter how the Harper and Machado free agencies resolve, these four teams will be 2019 lightning rods of baseball, with a fifth circling the airport.

1. Nationals. Remember when this free-agent class was going to shatter any and all investment records? If that had been a tweet, the kids would say it didn’t age well. To date, there has been just one nine-figure contract issued to a free agent. The good news? That contract raises the roof significantly, as the $140 million the Nats gave to left-hander Patrick Corbin over six years will be cited as a comparable for years to come.

When you throw in the signings of Brian Dozier, Trevor Rosenthal, Anibal Sanchez and Kurt Suzuki plus the trade with Cleveland for Yan Gomes, the Nats invested about $193 million in player talent this winter. If that’s a sum total neither Harper nor Machado would find acceptable for their packages, it nevertheless leads the pack for the moment and represents a counterintuitively aggressive approach in this era of the deliberate executive.

And if the Nats actually find their way back to Harper with a contract exceeding their original offer of $300 million over 10 years? PA chief Tony Clark might just say, “Screw it” and wear a curly W cap to his Manhattan office each day.

2. Mets. Yeah, in retrospect, it probably didn’t behoove COO Jeff Wilpon to publicly wonder on Thursday how many teams employed two $30 million players when the answer was “the Nationals!” — who will pay Max Scherzer $42.1 million and Stephen Strasburg $38.3 million as they try to top the Mets in the National League East for the seventh time in eight years.

Yet the Mets’ offseason under rookie general manager Brodie Van Wagenen, though notably not featuring Harper or Machado, will still generate union enthusiasm. Partly because their $130ish million of expenditures place them second (for the moment, again) behind the Nationals. Partly because their faith in 36-year-old Robinson Cano and soon-to-be-35-year-old Jed Lowrie bucks the analytical trend of not trusting anyone over 30. And partly because Van Wagenen himself, the former agent with expressed player sympathies, serves as a test case in a time when so many team decision-makers cut their teeth in — and absorb the mindset of — Major League Baseball’s central office. Success by BVW could open the minds and the purse strings of other teams.

3. Reds. A bad baseball team in a great baseball town for a long time now, they’re throwing caution to the wind and going for it in a division where “it” will be rather difficult to obtain. The Brewers and Cubs played a 163rd game to determine the 2018 NL Central winner and the Cardinals added Paul Goldschmidt and Andrew Miller to a team that went 88-74 last year. To that, the Reds said, “Whatevs.” They pulled off a massive trade with the Dodgers that placed a trio of high-ceiling, impending free agents — outfielder Matt Kemp and Yasiel Puig and pitcher Alex Wood — on their roster. They signed starting pitcher Tanner Roark to a one-year deal. And they acquired Sonny Gray from the Yankees and immediately signed him to an extension.

Coming off a 67-95 record, a sufficiently huge leap might not be realistic for the Reds, and a disappointing result would sting extra hard in light of the young talent they forked over to the Dodgers and Yankees, of all teams. Among those feeling such a bite would be the players, who have complained about the number of teams not trying their hardest to put a great product on the field every year. Cincinnati most certainly does not fall into that category this season.

4. Red Sox. At first blush, you’d think it has been a quiet winter for the defending champions. They do know the game still lasts nine innings, right? You have to bet on a reunion, eventually, between them and their own free-agent closer Craig Kimbrel.

Regardless, the Red Sox still own the game’s largest projected payroll (about $238 million, as per Baseball-Reference), and they did aid and abet the players with their four-year, $68 million commitment to Nathan Eovaldi, their October stud who has managed just two seasons (2013 and 2018) in which he provided both significant innings and above-average results.

5. (possibly) Phillies. Yup, these were the guys who were going to be the life of the party in this Hot Stove League, with owner John Middleton set to “maybe even be a little bit stupid about it,” as he told USA Today in November. So far, that mentality has led them to outfielder Andrew McCutchen, reliever David Robertson and shortstop Jean Segura, none of the commitments particularly stupid. They made a run at Japanese pitcher Yusei Kikuchi, only to see him choose the Mariners.

It still will be a considerable surprise if the Phils don’t wind up with either Harper or Machado; Harper now appears more likely. As long as that happens, these guys, too, will gain a fleet of secret admirers.