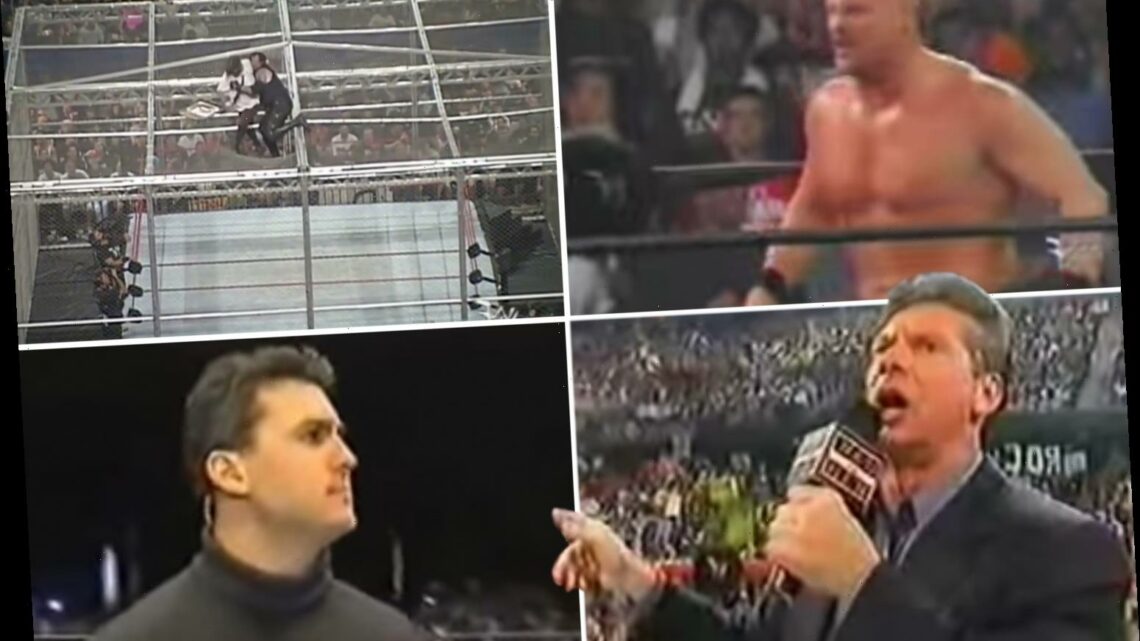 FOR more than 40 years, WWE has had fans on the edge of their seats with staggering plot twists and sensational match-ups.

Some of the most shocking moments include when Brock Lesnar did the unthinkable and defeated the Undertaker at WrestleMania and when Vince McMahon introduced his Monday Night War rival Eric Bischoff on Raw. 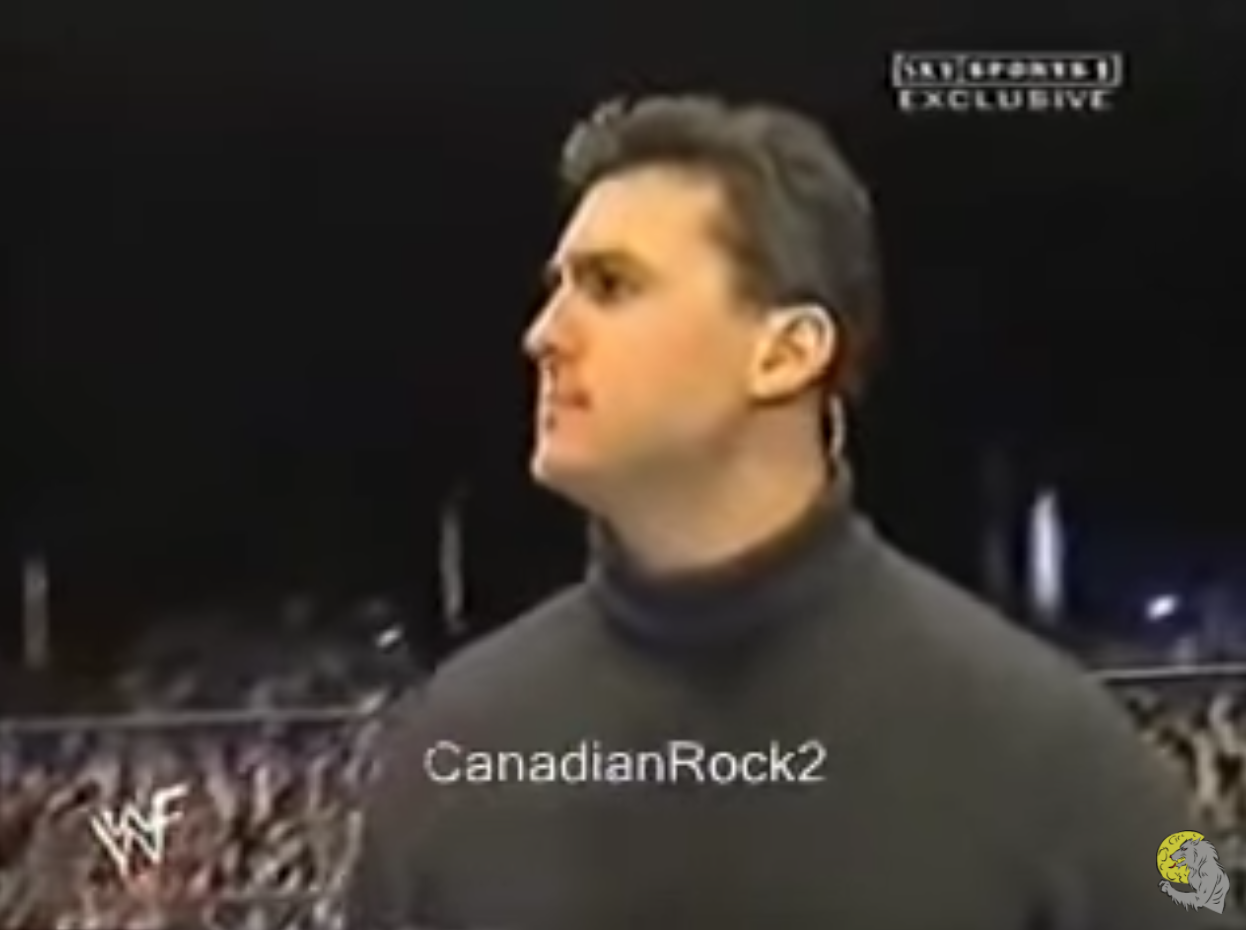 Here's our list of the top 10 most shocking moments in WWE history.

The Invasion storyline in 2001 was a wrestling spectator's dream – although it didn’t exactly play out the way fans thought it would.

During the 1990s, Vince McMahon faced stiff competition with World Championship Wrestling (WCW) a part of the Monday Night War. 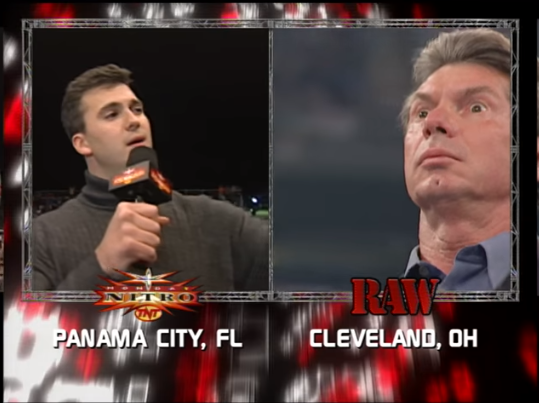 In 2001, McMahon ended the war by buying out his competition, as well as some of their wrestlers' contracts and championship belts.

On a simulcast that saw Raw airing alongside WCW Nitro, Shane McMahon appeared on the titantron and told his father that he had purchased his competition and was plotting his downfall.

As part of the Invasion storyline, WWE created a stable by incorporating several wrestlers from WCW and Extreme Championship Wrestling (ECW) called Team Alliance to go to war with WWE. 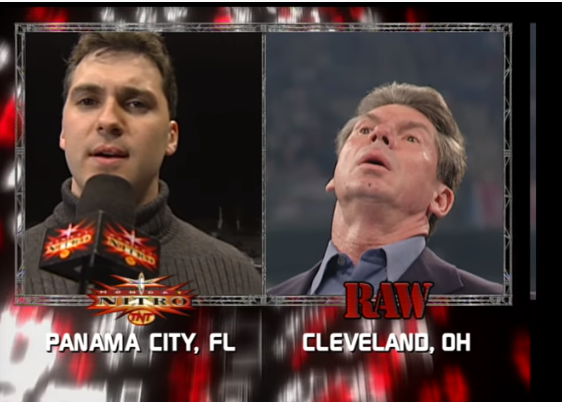 The storyline concluded at the Survivor Series event that same year, as Team WWE defeated Team Alliance in a 'winner takes all' match after The Rock pinned Stone Cold Steve Austin.

We’ll stick with WCW for the number nine slot.

During the 1990s, Eric Bischoff was the Executive Vice President for WCW and he spent the latter part of the decade trying to tear down the empire WWE had built. 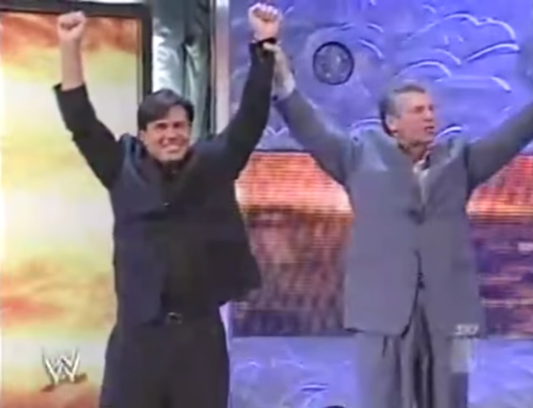 Bischoff knew exactly how to utilize his assets with wrestlers such as the New World Order, Goldberg, Sting, Bret Hart, Booker T and Scott Steiner under contract.

In 2002, Vince McMahon shocked the WWE universe when he announced during an episode of Raw that his former rival, Bischoff would be the next Raw General Manager.

If that wasn’t shocking enough, McMahon capped off the moment with a bear hug with Bischoff.

One of the most shocking WWE Championship changes in the business' history has to go to Jinder Mahal’s victory over Randy Orton at the Backlash event in 2017.

Mahal as WWE Champion was simply unimaginable in the eyes of WWE fans, but at Backlash the Modern Day Maharaja pinned Orton to begin his reign as champion. 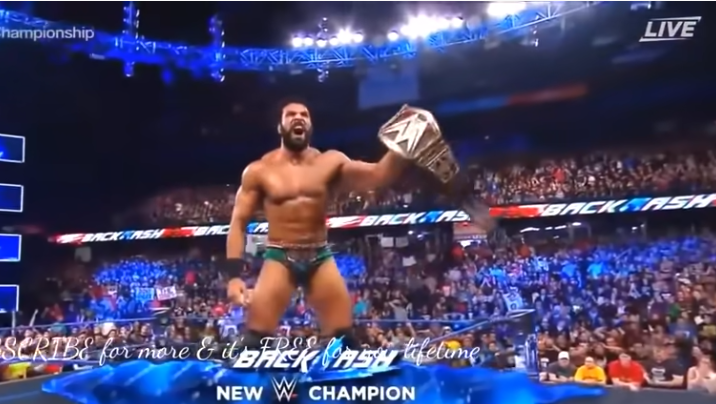 The move to put the title around Mahal’s waist was said to be a marketing strategy by the WWE, as the company looked to expand in India.

With his WWE contract set to expire at midnight, CM Punk faced off against John Cena for the WWE championship at Money in the Bank 2011, in Punk’s hometown of Chicago.

Punk pinned Cena to be crowned the new champion, but as the match was over, Vince McMahon called for Alberto Del Rio to cash in his Money in the Bank contract that he won that night.

As Del Rio entered the ring, Punk knocked him out with a kick to the head before proceeding to exit the arena through the crowd with the title, blowing a final kiss goodbye to his former boss. 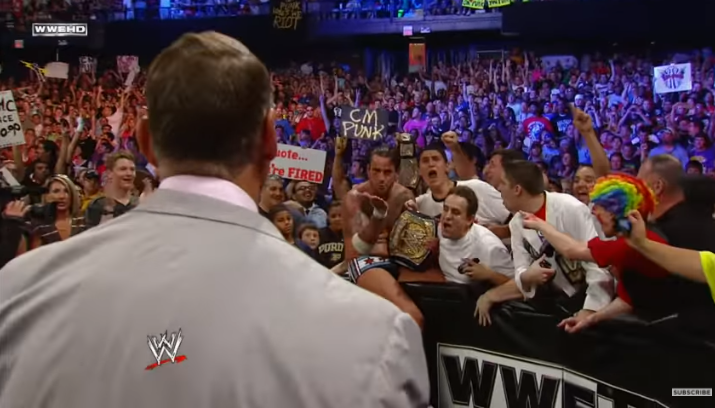 WWE suddenly had the hottest angle in all of wrestling.

As a free agent, Punk could defend the title all over the world and at other wrestling promotions – but within a month Punk reemerged on the scene at WWE with the belt and continued his feud with Cena.

After 12 years away from the ring, Goldberg returned to WWE in 2016 and absolutely destroyed Brock Lesnar at the Survivor Series pay-per-view.

Up until that point, Lesnar was billed as the most dominate force in the company. 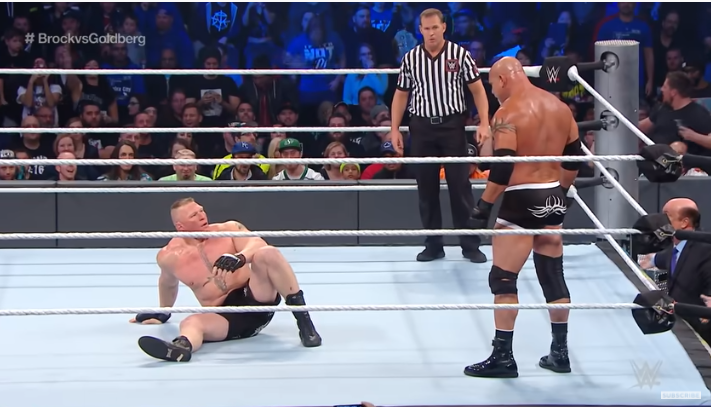 Lesnar ended the Undertaker’s WrestleMania streak in 2014, he destroyed John Cena for the WWE World Heavyweight title at SummerSlam that same year and held the title for 224 days.

However, it took Goldberg less than five minutes to beat Lesnar; after two spears and a jackhammer slam, he shocked the WWE universe by pinning the Beast Incarnate.

The renegade and anti-hero Stone Cold Steve Austin ripped the hearts of every WWE fan in 2001, when he turned Heel and sided with his longtime rival Vince McMahon.

At WrestleMania X-Seven, Austin was cheered like a hero in the main event against The Rock, but did a deal with the devil himself, McMahon, when he accepted a chair from him. 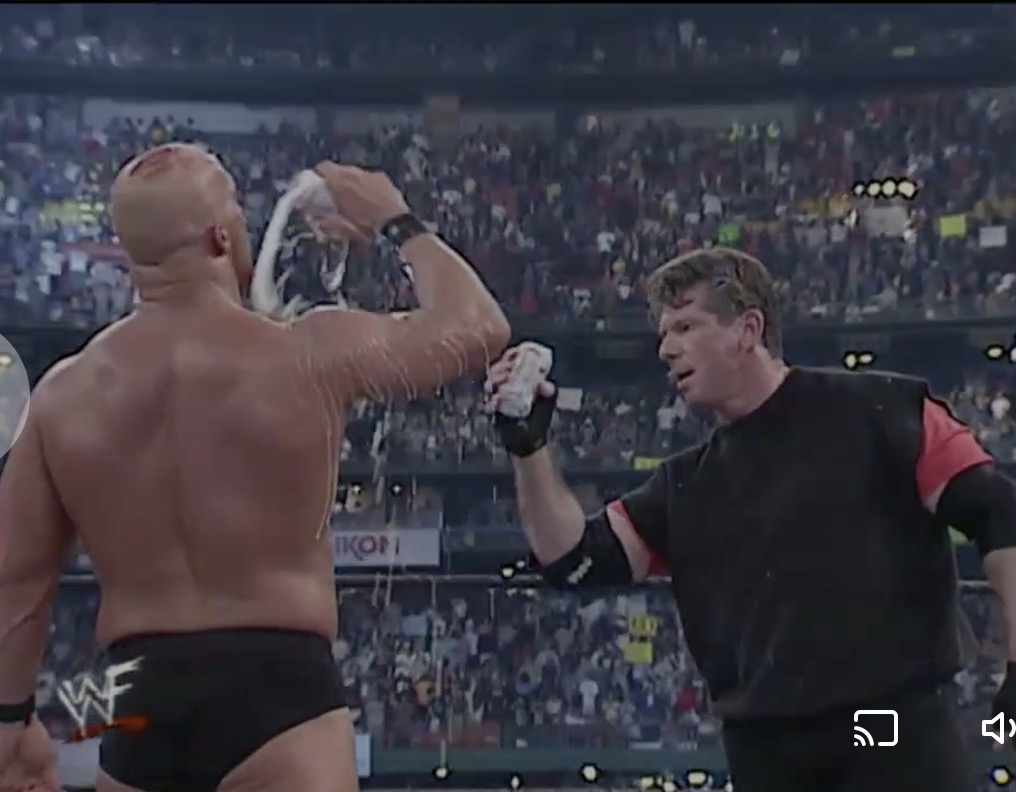 Austin then proceeded to brutalize The Rock, hitting him with the chair several times on his back before pinning The People's Champ and winning the WWE title.

After the match, wrestling fans cringed at the site of Austin and McMahon shaking hands and drinking a beer together following years of bad blood between the two.

What is turning Heel mean? 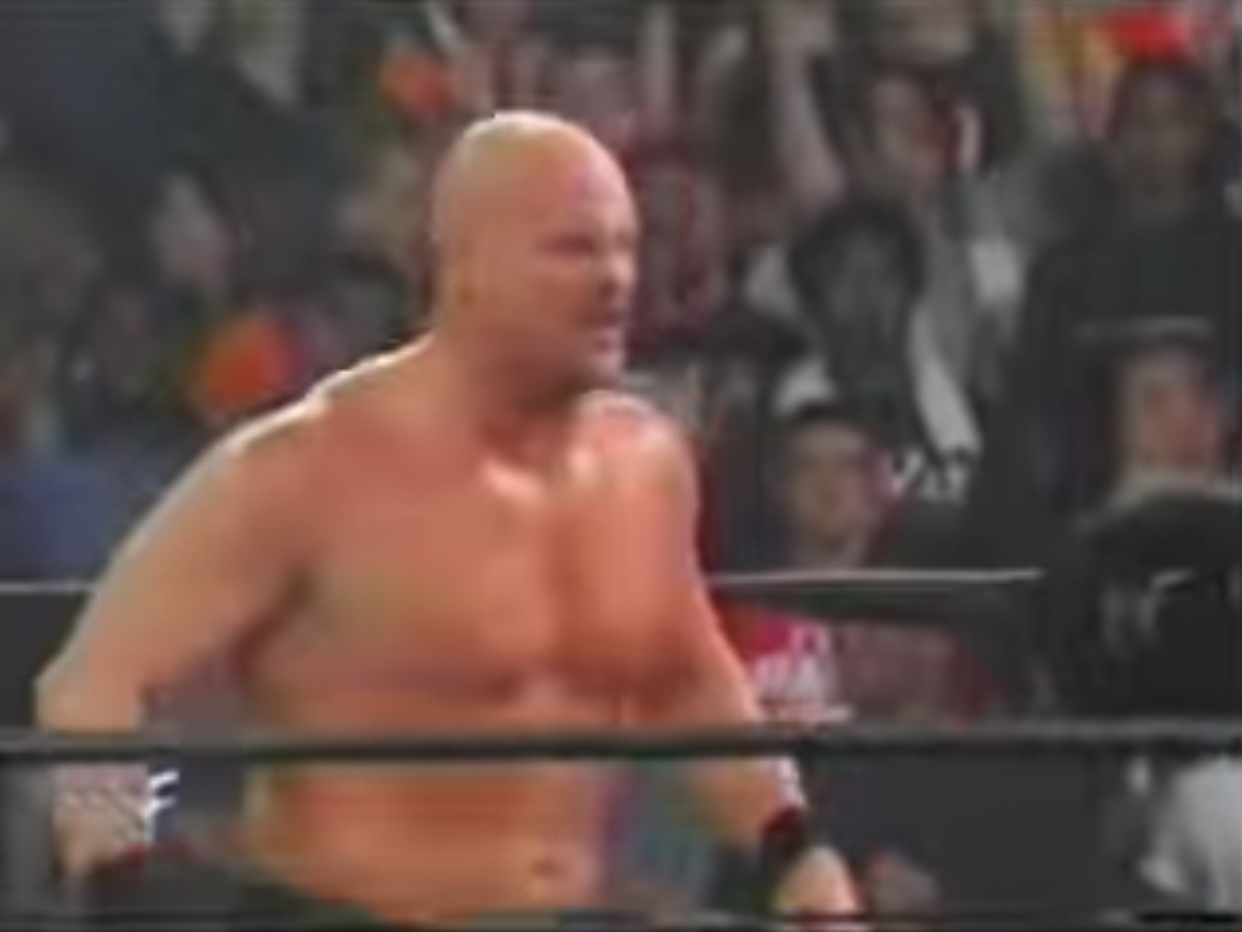 In professional wrestling, a ‘Heel’ is a wrestler who is portrayed as a villain or a bad guy and acts as an antagonist to the Faces.

'Face' characters are wrestlers who are the heroic protagonist or good guys.

On June 27, 2011, CM Punk dropped his infamous pipebomb promo where he went after Vince McMahon with an explosive speech that shattered the fourth wall.

Punk questioned why he wasn’t being pushed as the top guy in the company.

He even suggested the company would be “better off when Vince McMahon is dead” and fired shots at Hulk Hogan, John Cena and Dwayne “The Rock” Johnson for being “a** kissers.” 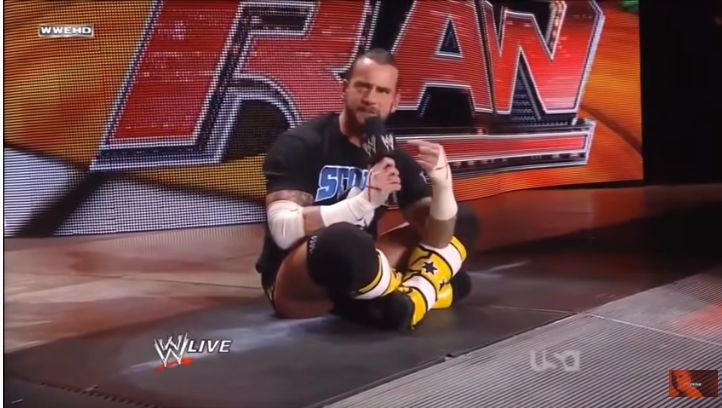 Punk who was legitimately reaching the end of his contract had been frustrated with his creative direction and took aim at that during his promo.

As real as the promo may have looked and sounded, the legendary pipe bomb was indeed something the WWE was aware of.

3: Undertaker vs. Mankind Hell in a Cell

The Hell in the Cell match between the Undertaker and Mankind was in fact the most brutal encounter in WWE history.

The match took place at the King of the Ring event in 1998, and as soon as Mankind walked towards the ring he immediately threw a chair atop of the cell and climbed the structure.

Undertaker wasted no time either, as he also climbed to the top of the cell. 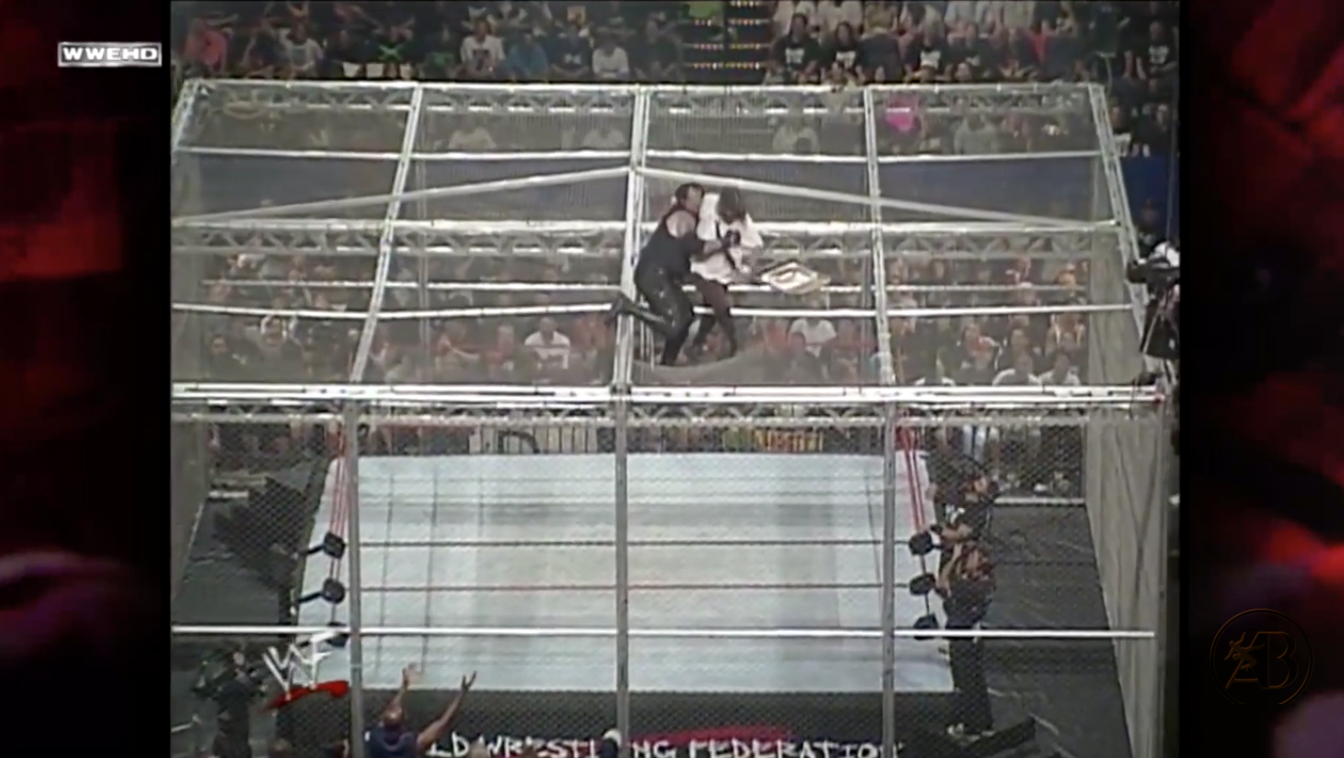 The match officially started with both men fighting atop the structure.

Minutes into the match, the Undertaker threw Mankind from the top of the cell onto an announcer's table below, in one of the most shocking and iconic moments.

The sequence was planned by the WWE, but an unplanned twist occurred as the match continued when Undertaker choke-slammed Mankind at the top of the cell causing him to fall through the wire and into the ring.

The bump sent one of Mankind’s teeth into his nose, which could easily have resulted in serious injury. 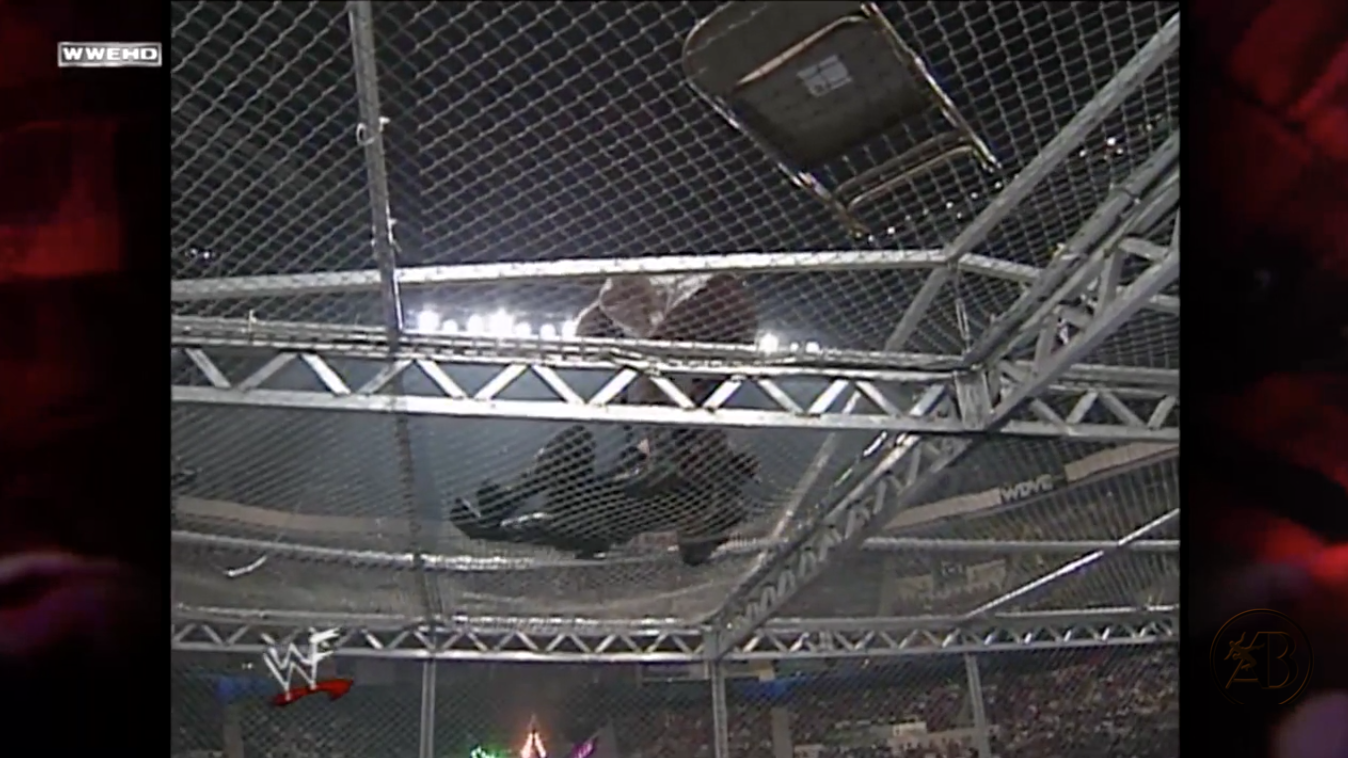 Mankind refused to quit and continued the match, until the Undertaker delivered a Tombstone piledriver pinning the deranged Mankind.

A moment that tainted Vince McMahon’s reputation came at the Survivor Series main event between Bret Hart and Shawn Michaels.

In 1997, Hart was set to leave the WWE for WCW, but he refused to give up his WWE title to Michaels at the Survivor Series event, which set up the infamous Montreal Screw Job.

The Montreal Screw Job was a controversial unscripted incident in the Hart and Michaels match, where McMahon and other WWE employees covertly manipulated the predetermined outcome of the match. 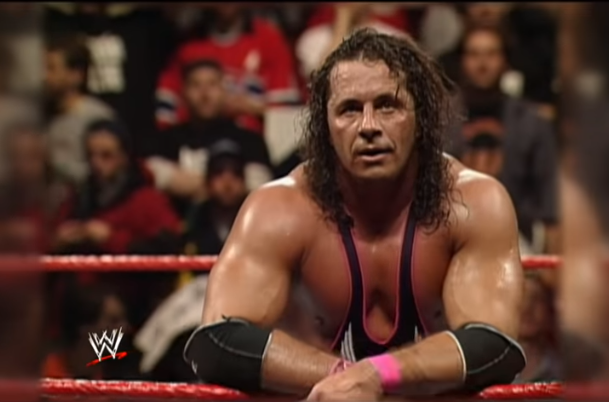 The final results of the match occurred without Hart’s knowledge and concluded with Hart controversially losing the title to Michael’s in his last WWE match.

The stunned face on Hart could be seen after the bell when he realized what had happened.

Moments later Hart was caught on camera sipping in McMahon’s face and writing WCW in the air.

"The streak is over." 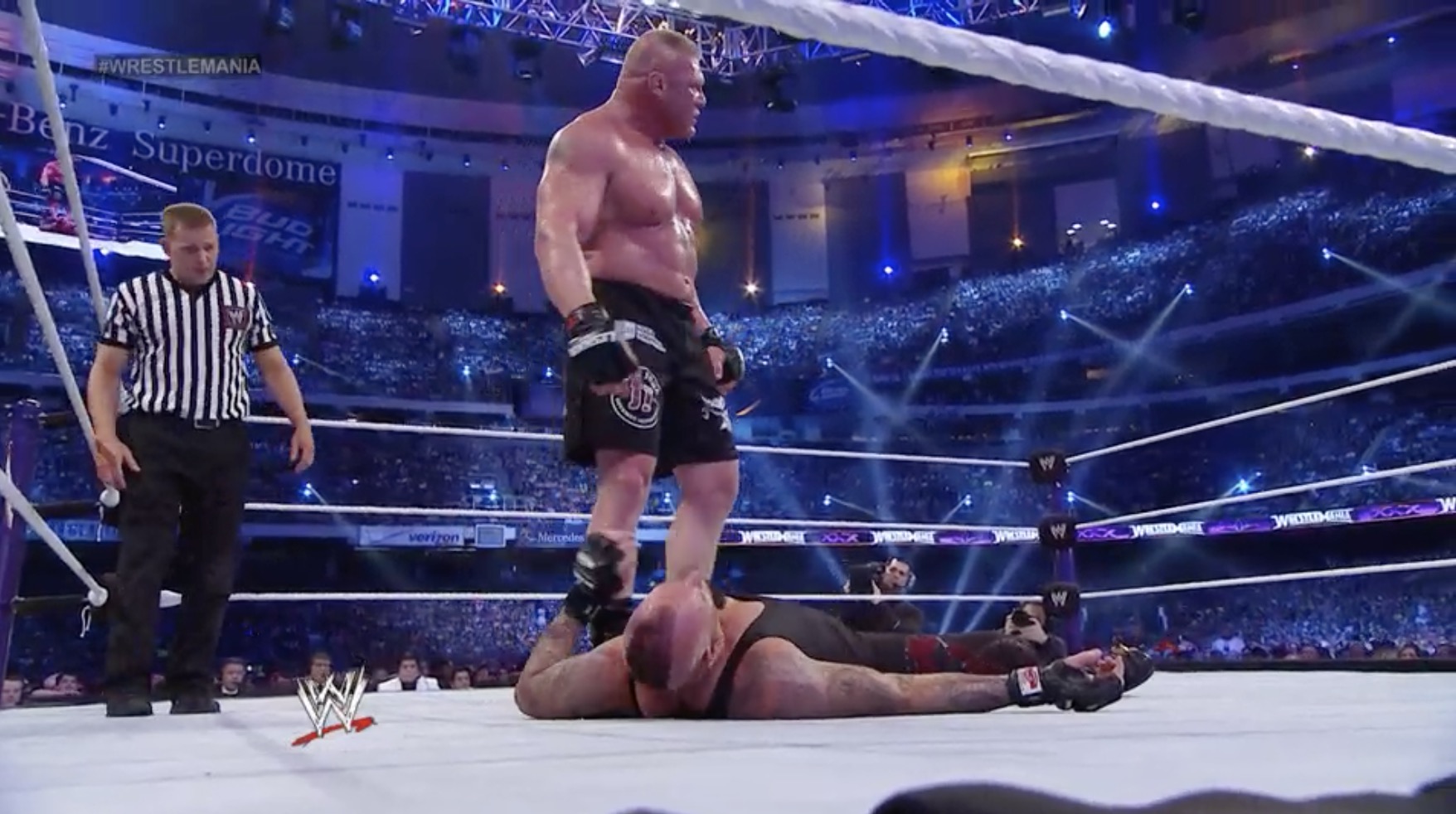 Taker had immortalized his legacy at WrestleMania by going undefeated for 21 straight years.

All of that changed at ‘Mania 30 when Lesnar pinned Taker after hitting a third F5, his signature move, to hand the Phenom his first loss at WrestleMania.

The stadium filled with more than 75,000 fans went completely silent after the bell.