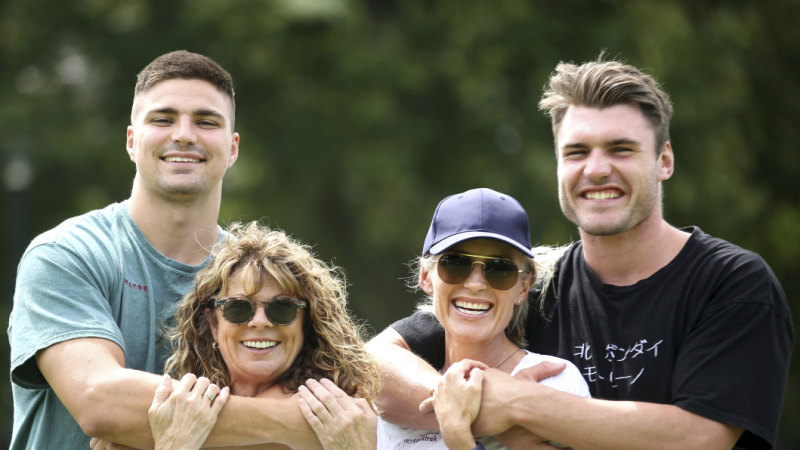 Behind most footballers is a proud mother but in the case of Wallabies young gun Jack Maddocks and new Sydney Roosters recruit Angus Crichton, they both have two.

While there is nothing biological about the relationship, it may as well be, for Crichton’s Wikipedia page claims he and Maddocks are siblings. Brothers from different mothers. 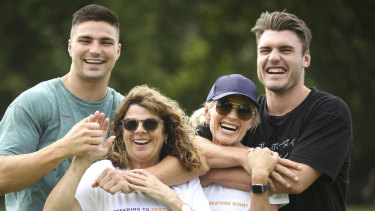 Jack Maddocks (left) and Angus Crichton (right) will be supporting their mothers Bronwyn and Pip who are competing in the Sydney Coastrek on March 15.Credit:James Alcock

Bronwyn Maddocks and Pip Crichton met when their sons attended Scots College together and hit it off since then. Their families became intertwined and Jack and Angus shot to stardom in both rugby and rugby league.

"I don’t even really consider us mates anymore," Maddocks said. There’s a slight pause. Then belly laughter from the pair. More family than friendship, they say.

While Jack and Angus, born on the same day a year apart, make headlines for their performances in Test rugby and the NRL respectively, they feel it is time to shine a light on the women who have shaped their lives.

"They are two very strong, powerful women and we wouldn’t be where we are without them," Angus said.

Bronwyn and Pip are embarking on their own challenge for a "great cause". They will compete in the Sydney Coastrek on March 15 – a 30km walk across the city’s rugged and breathtaking coastline in a bid to raise funds for the Fred Hollows Foundation.

The boys’ footballing schedules will prevent them from taking part but even they are glowing with pride at what their mums are aiming to achieve.

"I reckon they will smash this," Jack said. "Pip is one of the busiest bees I know. She’s worn through her shoes. I’m proud of mum for having a crack. I don’t reckon I’d get through 30 kilomteres to be honest."

Angus added: "Both these girls have been big influences on me and to see them do this will be good and they are both massive walkers. For a good cause it will be fun for them and it was good to give them a bit of attention and put them in the spotlight for how great they have been for us two growing up."

Getting through 30 kilometres might be an opportune time for Bronwyn and Pip to reflect on some of the fonder memories they have shared together.

Crichton grew up in Young and the Maddocks family would often go out to visit on the farm.

"There’s a photo of Jack in the driver’s seat of a paddock basher and Jack must have been sitting on two phone books because he was very small," Bronwyn said. "There is Angus next to him, teaching him how to drive on the farm." 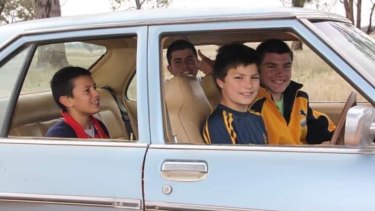 Back in the day: Jack Maddocks in the driver’s seat and Angus Crichton next to him in a car on the Young farm where Chrichton grew up.

There was parental supervision, of course, but perhaps not on another occasion the Wallabies utility happily brings up with a grin on his face.

Jack and Angus were at the Young races one afternoon and not old enough to have a bet. So, they decided to ask someone else to put it on for them. Whatever money they had saved up went onto More Joyous and they held their breath watching it run around the track.

Sure enough, More Joyous crossed the line first. What to do though?

"We won $340 and had no other choice but to bury it in the cubbyhouse," Jack said. "We came back like three years later and dug it up."

Their mothers can only roll their eyes and laugh as stories of years gone by are retold. Bronwyn and Pip travelled to New Zealand to watch Maddocks in just his second Wallabies Test, while both families have been avid spectators at Crichton’s games.

Jack was in the sheds at ANZ Stadium when Angus won a State of Origin series with NSW last year, sipping on a quiet drop of the sponsor’s product with his best mate, who he sometimes shares an apartment with in Sydney's eastern suburbs when he is not in Melbourne with the Rebels or gallivanting around the world.

The last few years have been a wild ride for Chrichton and Maddocks, and the being in the spotlight is not something they ever envisaged. They keep each other in line and push one another to be the best footy players they can be, even if they are in different codes.

"It’s probably off the field we are more proud of them than on the field with the boys," Pip Crichton said. "I am just proud of who they have become and how kind they are and how humble they are."

Registrations close on the 15th of February for Coastrek. Register here to take part: https://sydney.coastrek.com.au/events