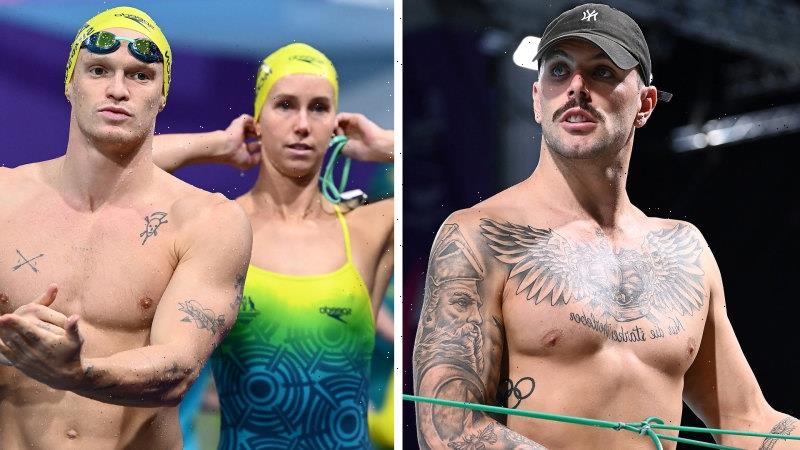 The real victim of the Swimming Australia love triangle

“Fame,” David Bowie said, “can take interesting men and thrust mediocrity upon them.”

In the case of the Australian swim team, fame takes incredible athletes and tries to make them interesting.

Cody Simpson — one side of swimming’s so-called love triangle — can do fame in his lunch hour.

He dated Miley Cyrus and rubs shoulders with Justin Bieber. The remaining two sides of the polygon, however, are battling to wrap their young chlorine-soaked minds around celebrity.

Kyle Chalmers will tell anyone who will listen how tough he’s doing it, and if they’re not interested he’ll let his 109,000 Instagram followers know anyway.

He keeps threatening to leave the sport like the masses will care. In breaking news, just to hand, they will not. 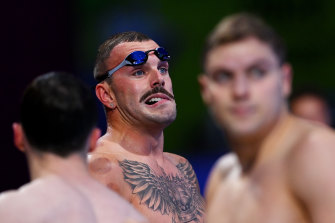 Kyle Chalmers was unhappy with some members of the media on Saturday.Credit:Getty

The real victim in this saga is Emma McKeon, Chalmers’ former love interest who now dates Simpson. She is the most important member of the Australian team because of how many individual and relay events in which she is competing.

McKeon is Australia’s most successful Olympic swimmer following her record haul at the Tokyo Olympics, but her toughness in the pool and her huge program at each meeting disguises the fact she’s sensitive, bordering on fragile, out of it.

Few seem willing to talk about this but it’s a reality that should be expressed.

After the medal ceremony for the 4 x 100m freestyle relay on Saturday night, McKeon walked into the media mixed zone like she was heading to the dentist for root canal surgery.

As her teammates spoke about winning gold, McKeon nervously scanned the faces of each journalist, eventually smiling when she spotted someone she knew.

Even then, it was short relief.

The cross-examination began and she stammered through her responses.

She trailed off sentences. It was hard to watch. 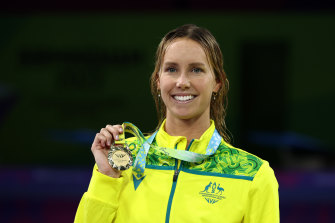 With an 11th gold medal, Emma McKeon has become the most successful athlete in Commonwealth Games history.Credit:Getty Images

Australian swimming dreams of the media coverage garnered by the football codes but in reality it cannot handle the heat.

Here, at the Commonwealth Games in Birmingham, it’s the perfect storm involving aggressive journalists and a love tryst that happens to include a very popular singer-songwriter.

Swimmers bemoan the lack of media coverage but then, every two years, whether it’s the Commonwealth or Olympic Games, the focus narrows upon them.

Senior reporters who never cover the sport replace journalists who are normally cheerleaders in the mixed zone. The questions focus on personal issues instead of split times.

Rightly or wrongly, it is the nature of the beast.

This time, though, there is the added spice of Simpson: a pop star who walked away from music to concentrate on sport.

As former 100m world champion James Magnussen said on SEN Radio: “Cody has brought a new group of journalists into the sport: the gossip journalists. And they’re writing about the drama and the reality TV aspect of this swim team, which is fine. Any exposure is good. For Kyle, he feels it’s against him.”

There have been claims the so-called love triangle has created a deep divide within the team, but several sources close to all parties describe it simply as “awkward”.

Which is understandable. If two colleagues in any workplace were in a relationship, then one started seeing another colleague, there would be understandable tension.

The Australian swim team, however, is a unique office.

Simpson has been brushing aside the incessant media interest as you would expect from a former teenage pop sensation who dated Cyrus and walked red carpets with “Biebs”.

Chalmers and McKeon have clearly struggled with the intrusion into their personal lives.

Australia’s chef de mission Petria Thomas told the Herald and The Age she was deeply concerned about Chalmers’ state of mind after his media detonation over the weekend.

‘This whole thing has been a beat-up. It’s clickbait.’

“They’re human beings,” Thomas said. “And as human beings, that is all I am worried about. I spoke to Kyle this morning and told him he had our support. These headlines are very disappointing. I’m not sure why personal issues are being raised and talked about, but we should be focusing on what our athletes are doing in the pool, not out of it. This whole thing has been a beat-up. It’s clickbait.”

Chalmers walked past the throng of reporters, then stopped and returned on Saturday night.

While McKeon was flummoxed, the 24-year-old sprinter went on the attack, engaging in some verbal tongue-fu with a News Corp reporter who had written about him that day.

The exchange wasn’t televised but I was standing in the mixed zone. Chalmers was firm and strong. He didn’t shout and argued his point well.

His impassioned plea to “the media” to back off in the name of mental health has been seen as a line-in-the-sand moment.

The truth is, it could’ve been handled better.

This story has been bubbling along since the trials in Adelaide in May.

Chalmers slammed the reports at the time via his Insta account, and since then there has been growing anger within the national team.

So much so, it can be revealed that the team discussed a complete media ban at these Games. In the end, officials talked them out of the idea of walking through the mixed zone without uttering a word.

Late on Saturday night, there were serious discussions again about a blanket media ban. When the team arrived on Sunday morning, Australian officials were concerned this time it would happen.

Controversy shadows the Australian swimming team at most major meetings, whether it’s involving Stilnox use in London, trashing rooms and breaking curfew in Rio, or a roll call at rehab clinics around the world.

Most of it can be attributed to the gruelling nature of the sport; the endless obsession with the black line from a young age.

Privately, athletes in the other sports are rolling their eyes about the latest controversy engulfing the swim team. 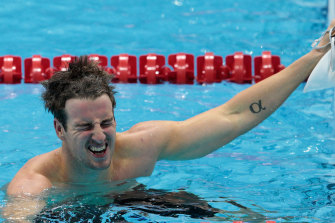 James Magnussen has experienced the pressure that comes with a swimming scandal.Credit:Getty

“They get all the funding,” one told me on the eve of the opening ceremony. “And now all the headlines.”

Whether it’s at the Olympics or Commonwealth Games, Australia’s swimmers are considered a team within a team, although some officials dispute this. They say athletics, ahead of swimming, sets itself apart from other sports. They also say there was a concerted push at the Tokyo Olympics from the swim squad, particularly the coaches, to integrate with the rest of the team.

It hasn’t helped that Swimming Australia is in a constant state of flux, churning through new management.

If not for the financial backing of Australian mining magnate Gina Rinehart, the sport would likely collapse in the absence of a major sponsor.

This week’s headlines have not helped that cause although this month’s “Duel in the Pool” meeting against the US in Sydney should stir interest.

Certainly, Swimming Australia does not have the ability nor strength to handle a crisis, let alone control the media message.

It has been clear since the trials the love triangle story would be aired at these Games. Instead of getting ahead of it, officials ignored it.

Simpson and McKeon’s banal interview on Channel Seven’s Spotlight didn’t extinguish any heat. A simple denial from the three swimmers of any conflict before the meeting started would’ve killed the story.

Instead, it was allowed to fester, detonating on day two of the Games.

Something similar happened weeks ago when teenager Isaac Cooper was sent home days before the meeting for what Swimming Australia said were “wellbeing issues” relating to “the use of medication”. When Cooper returned to Australia, he said the medication was not a banned substance.

How much of the media focus on Chalmers, Simpson and McKeon is justified and how much is too much?

There is a growing belief that managers have too much say in the running of the sport. There’s also a belief that swimming produces too many athletes out of touch with reality.

‘There’s going to be relationships that start, end, that are fractured. It’s a swim team. It’s not a football team when people are on the same page.’

Chalmers has been on the phone to Magnussen daily, and in recent times has seriously floated the notion of walking away from the sport.

During his career, Magnussen was one of the sport’s most sensitive characters. He bruised easy.

Now, he provides a perspective not many swimmers have.

“I’ve spoken to Kyle and he’s doing it really tough,” Magnussen said. “This is the first time he’s faced some negative media. It’s not all been negative coverage. It’s just people taking notice of what’s going on. They noticed he didn’t shake hands with Emma, they noticed that he did the butterfly at the world champs to keep Cody out. That’s OK: There’s gonna be feuds, there’s going to be relationships that start, end, that are fractured. It’s a swim team. It’s not a football team when people are on the same page shooting for the same goal.

“For Kyle, it feels like the world is closing in on you. Not everybody in Australia is walking down the street saying, ‘What about Kyle Chalmers and Emma McKeon breaking up?’ It’s not the biggest talking point in the world.”

It depends, of course, on the boundaries of your world.

Sports news, results and expert commentary. Sign up for our Sport newsletter.

The View hosts then and now – where are favorite and forgotten Barbara Walters, Rosie O'Donnell, Star Jones and more? | The Sun