Home » Sport » The Rangers’ veteran blockade has run its course 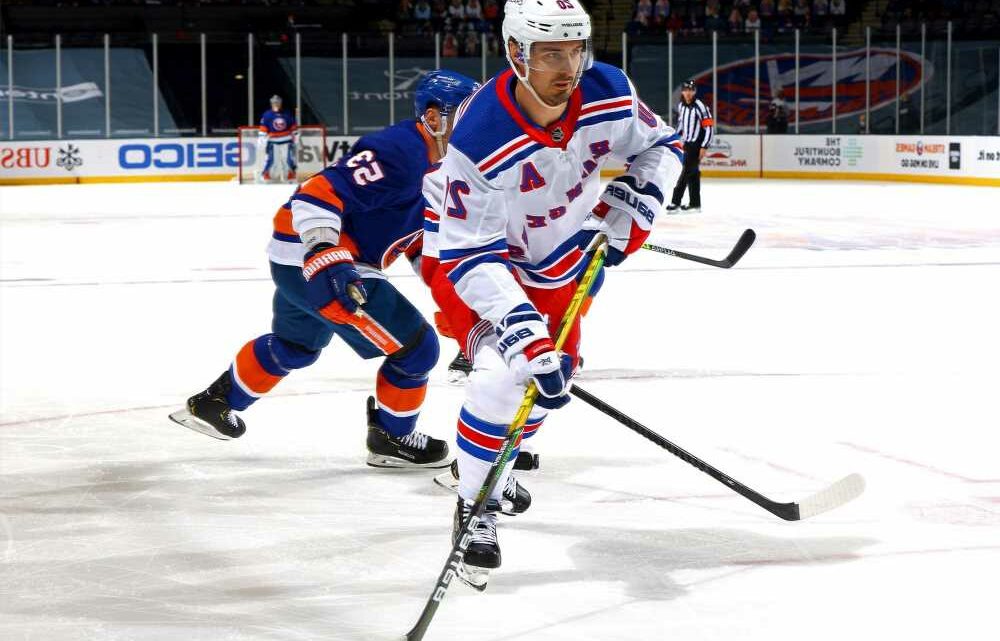 The Rangers’ veteran blockade has run its course

Rangers failing to keep up their end of rivalry with Islanders

There’s been a kind of a blockade at the top of the Rangers’ lineup, which is an interesting state of affairs for a team that finished 18th overall and could not make it to the playoffs last season, and sits 17th overall, on the outside looking in at the tournament this season.

Because you’ve got the Chris Kreider-Mika Zibanejad-Pavel Buchnevich trio forming one of the 1A units and then there is the inviolate Artemi Panarin-Ryan Strome combination on the other. Under this formation, there is room for one more and only one more.

That is one of the challenges David Quinn confronts when the coach looks for ways to increase the ice time and responsibility for his young guns. It’s a squeeze at even strength and it’s a squeeze on the power play.

Don’t get me wrong. The Rangers’ marquee players represent the team’s strength. But as Lou Lamoriello told me that my strengths were also my weaknesses when I worked for him in New Jersey more than a minute ago (and there is no need to get into specifics), that applies as well to the Rangers and their upper-echelon guys.

Because when they’re not going, they still eat up the ice time even when others might be more deserving in a given circumstance. The coach goes back to them because of history. The players believe they merit the ice time because top players always believe the next shift will be the one on which they would win the game.

But Sunday night, in the back end of a two-game set at the Coliseum in which the Rangers played their second impressive game within 48 hours against the Islanders despite losing 3-2 in overtime, Quinn flipped the script.

For after a particularly galling first-period performance by Kreider, who flipped the puck over the glass for a delay of game penalty 23 seconds into the match — to give the Islanders a power play on which they scored — bookended by a puzzling change in the final 12 seconds that allowed the home team wide-open spaces from which to score for a 2-0 lead at 19:52, the coach had seen enough.

And so Quinn moved Vitali Kravtsov up from the fourth line onto the unit with Zibanejad and Buchnevich while No. 20 took the Russian’s spot alongside Kevin Rooney and Brett Howden. This wasn’t shock treatment. This wasn’t message-sending, either. This was the coach making a move to give his team its best chance of securing a victory.

“We were struggling so bad in that first period and I’ve really liked the way Kravvy has been playing, so I thought I’d give that line a different look,” Quinn said. “The line hasn’t been as sharp as it normally is. I thought it was something we needed to do.”

Kreider has been a notoriously streaky scorer throughout his career. His game goes in and out. But for almost a month, it has been out. Kreider has failed to score a five-on-five goal over the last 14 matches, dating back to March 13. He does have three power-play goals in the interim, but not one over the last seven contests. As the scoring has dried up, the rest of Kreider’s game has suffered as well.

“He’s at his best when there’s simplicity to his game and there’s no hesitation to what he’s doing,” said Quinn, who did move Kreider back up for a couple of shifts at different times and sent him out as the net-front guy on the first power-play unit. “Right now there is a little bit of hesitation in his game.”

Kravtsov’s arrival, and almost in a double-meaning, has given Quinn the depth to make that kind of a move. Let’s just say, all due respect, the coach would not have been comfortable making such a switch involving Julien Gauthier.

“I love how he competes, I love his skill set and I love his hockey IQ,” the coach said of the 21-year-old Russian, who picked up his first point in his fifth NHL game by assisting on Brendan Smith’s 2-2 goal in the second period. “Right from the get-go, he’s been playing with confidence that’s growing each game and I just thought he deserved that opportunity.”

Kreider isn’t the only vet to have struggled this weekend. Panarin was unusually quiet. Strome was fair. Zibanejad was in and out. So was Buchnevich. No. 93 did get an empty-netter in Friday’s 4-1 victory, but the team’s other five goals were scored by Alexis Lafreniere, Colin Blackwell, K’Andre Miller, Libor Hajek and Smith. And the Blueshirts still copped three of four points from one of the league’s strongest teams.

There still isn’t space on either power-play unit to accommodate either Lafreniere or Filip Chytil. Vets are in the way. It might be time to end that blockade, as well.