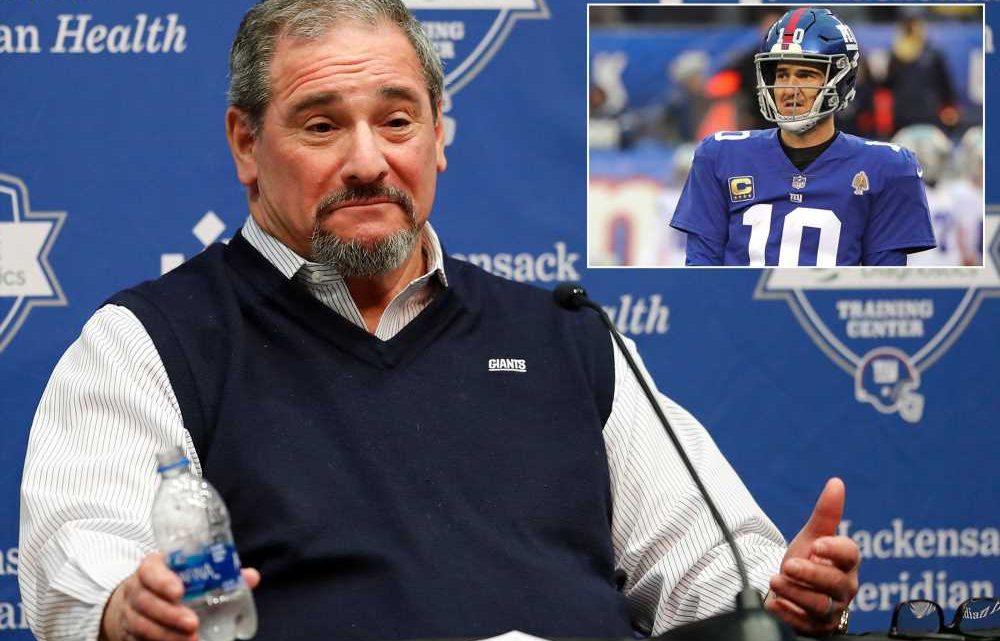 As often as general manager Dave Gettleman reminds everyone Eli Manning is closer to 40 than he is 25, as much as he desires to bring a youngster in to learn “at the feet’’ of Manning, he will not — repeat, will not — give any special consideration to selecting a quarterback this Thursday night in the first round of the NFL draft.

“I’m just telling you, we’re not going to force a pick,” Gettleman said Thursday. “You can’t draft for need, you’ll get screwed every time. You’ll make a mistake.”

We get it. But when it comes to the most important position to fill, and when your quarterback is 38 and entering his 16th season, can an exception be made? Perhaps an asterisk that allows for an adjustment for taking a quarterback with what can be described as a bit of a reach.

Gettleman smiled, and then laughed.

It goes round and round with the Giants as they head into Gettleman’s second draft calling the shots. A year ago, with the ability to take Sam Darnold, Josh Allen, Josh Rosen or Lamar Jackson with the No. 2-overall pick, Gettleman went with running back Saquon Barkley, a player the Giants insist was the best player in the entire draft, a generational talent. The Giants went 5-11, they now have the No. 6-overall pick, as well as the No. 17 pick, acquired from the Browns in the trade that sent Odell Beckham Jr. to Cleveland.

The way Gettleman sounded in his pre-draft press conference, the breadcrumbs seem to lead to the Giants going defense at No. 6. Gettleman again placed blame on the defense for blowing three games down the stretch of last season.

“I’ve always been a big believer, you talk about roster construction, if you look at the great defenses, they got a lead dog at every level, a legitimate player anchoring every level of their defense,” Gettleman said. “Yeah, we got to get some defensive players.”

Asked if the Giants have any “lead dogs” at any level of their defense, Gettleman mentioned Alec Ogletree at linebacker and “the two safeties we brought in,” referring to Jabrill Peppers (in a trade with the Browns) and veteran Antoine Bethea (signed in free agency).

“Antoine’s been a lead dog,” Gettleman said. “We’re getting there.”

The Giants are not there yet. They do not have a “lead dog” on their defensive line or at edge rusher. Gettleman said “we’re thrilled” with B.J. Hill and Dalvin Tomlinson, and said he is encouraged by Lorenzo Carter, all arriving in the 2018 draft. There are four widely accepted front-line defensive studs in this draft — Nick Bosa, Quinnen Williams, Josh Allen and Ed Oliver –and even if they are all gone when the Giants are on the clock at No. 6, Gettleman said the Giants will not be shut out as far as adding an impact front-seven defensive player.

Sign up for the Starting Lineup newsletter and submit your NFL draft questions. We’ll answer our favorites weekly until the draft.

The Giants’ draft board is nearly finalized, enough so that Gettleman sent the scouts home for the holiday weekend. There will be some tweaks in the coming days, but essentially the evaluation process is complete.

This draft is considered exceptionally deep. Gettleman underscored that by stating he has more players rated as worth a first-, second-, third- or fourth-round pick than ever before, as he moves into his seventh NFL draft as a general manager.

“In terms of the volume of players on the board, this is the thickest,” Gettleman said.

The Giants have 12 picks, with three in the first 37 and four in the top 95 covering the first three rounds.

“First-, second-, third-round draft picks, at the very least you’re looking for a big rotational player,” Gettleman said. “Guys who can walk on the field and help you win now. Anything after that is a huge bonus.”

If the pick at No. 6 goes for defense, No. 17 is up for grabs. The Giants could go defense again, offensive tackle or (drumroll, please) quarterback, where Daniel Jones of Duke or Drew Lock of Missouri could be in the mix. Dwayne Haskins of Ohio State does not figure to be on the board that late.

The Giants could add a quarterback by trading for Josh Rosen, if the Cardinals do the expected and take Kyler Murray with the No. 1-overall pick. Asked about that scenario, Gettleman said, “We’re gonna sit there and see what’s cooking at six and then go from there.”

Asked if he has engaged in any conversations with the Cardinals, Gettleman said, “I’m not going there.”

How Much Did It Cost Jill Duggar and Derick Dillard to Build Their New House?
World News