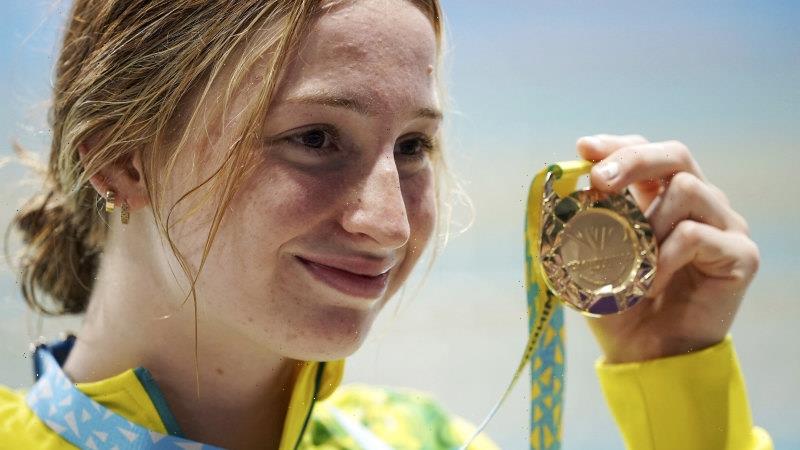 Mollie O’Callaghan has a touch of Bohemian spirit. She brings a delightful quirk to a sport infamous for its proclivity to dim the shades of those who see the world through rose-coloured glasses.

The 18-year-old likes to paint in whatever spare time she can find and still has to finish school. She’s exceedingly polite, rarely stops smiling and is a little goofy; before talking to reporters on Tuesday, she spent a minute trying to cram an assortment of trinkets into a tiny bag in a moment of impromptu physical comedy, each new addition prompting another to tumble back onto the floor. 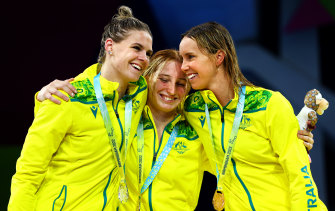 Shayna Jack and Emma McKeon tower over Mollie O’Callaghan, who beat them both in the 100m freestyle final.Credit:Getty

That’s out of the pool. In the water, she’s a stone-cold assassin. After becoming the 100m freestyle world champion last month in Budapest, she added the Commonwealth title as she bounded off the wall to mow down Shayna Jack and none other than Emma McKeon, the Olympic gold medallist.

Her rise has been remarkable and her style of racing exhilarating. She gives away starts but that’s the luxury you have when you finish with such a flourish. She turned behind her Dolphins teammates but her second 50m was more than half-a-second quicker than both as she touched in 52.63s.

Jack’s return from a doping ban continues to gain momentum and McKeon can clearly go much faster than her 52.94. But after a long break from swimming and another ridiculously busy program, some wear and tear can only be expected.

But this was O’Callaghan’s night. She was emotional after her win – she hasn’t seen her parents in eight weeks – and this seems like it’s the start of a special rivalry with McKeon and a special career. 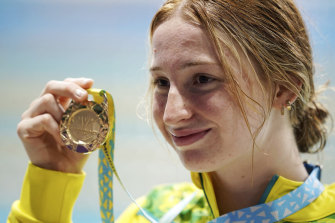 “It’s still sinking in, I have a lot to improve. This is just the beginning. It’s more of the fact I’m just learning, each race is a different race. It’s pretty cool, I’m just trying new things. It’s been amazing so far,” O’Callaghan said.

Being on the road for such a stretch hasn’t been easy, with O’Callaghan saying she had been a ‘physical and mental wreck’ at various stages.

“It’s not something that I’m used to yet, being away for so long and trying to stay focused on swimming,” she said. “I have my moments where I’m not feeling the greatest and I’m just mentally out of it. But I always have somebody to pull me back in, the support I get is just incredible.”

It was another strong night for the Australians, with another teenager Elizabeth Dekkers breaking through for her maiden international title in the 200m butterfly. And Ariarne Titmus did what Ariarne Titmus does, crushing the Commonwealth record with a dominant 800m freestyle win in 8:13.59. 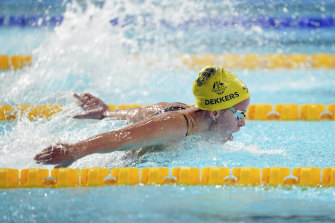 Gold also went to Australia in the mixed medley relay, with the team of Kaylee McKeown, Zac Stubblety-Cook, Temple and McKeon far too good, while Col Pearse stood atop the podium after taking out the the S10 100m fly final.

Chelsea Hodges grabbed bronze in the 100m breaststroke and Matt Temple dead-heated for silver with James Guy in the 100m butterfly behind Canada’s Josh Liendo Edwards, with a long glide to the wall costing him a fraction of a second.

That race also featured Cody Simpson, who finished fifth and spoke glowingly of his first experience swimming at a major international meet. He knows he must improve to be there in Paris but feels more motivated than ever before.

“I was talking with my coach and Mack Horton, who I’m rooming with, and he said ‘you’re just gathering intel right now’. So to come out in my first international final, I knew it would be tough to be in the running for a medal, I just tried to put my best swim together under that pressure and in that environment,” Simpson said.

“I try to learn something every time I race and I’m very analytical. I’ll probably watch this back 100 times in the next week. I’ll make sure I come back and fine-tune whatever I need to do for the next one.

“I’ve had one of the best weeks ever so far. I’m rooming with some amazing guys and I’m already gaining friends for life. Just inspiration to go back and train even harder.”

The meet finishes on Wednesday night in Birmingham with a showdown that has been on everyone’s lips from the first race. Titmus, who swam a gruelling 800m, squares off with Canada’s boom teenager Summer McIntosh in the 400m freestyle, who will be fresh and ready to fire a warning shot towards the great Australian.

Get all the latest news from the Birmingham Commonwealth Games here. We’ll be live blogging the action from 4pm-10am daily.