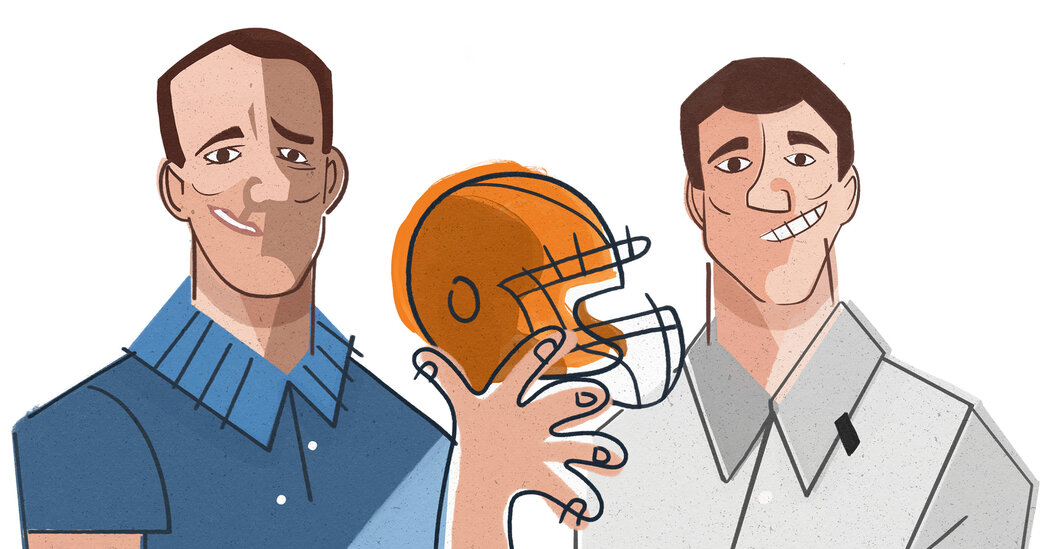 The Mannings Give TV Sports Yet Another Alternate Viewing Option

Midway through the telecast of this N.F.L. season’s first Monday night game, Eli Manning asked his brother Peyton what he would do when a coach called a play he did not like.

He added that he would have to give the assistant equipment manager, who was sure to be yelled at by the coach for the malfunctioning headset, a nice holiday present.

It was a prime example of an N.F.L. moment suited to the brothers who are former star quarterbacks: a funny, well-told, behind-the-scenes anecdote that revealed how football actually works. The generally well-received telecast was full of such nuggets, prompting optimism about ESPN’s evolving experiment.

The Mannings were not on ESPN’s main presentation of “Monday Night Football.” Their showcase was the debut of an alternate telecast option that will run nine more times this season on ESPN2 or ESPN+, the streaming service. The Mannings will work two more telecasts in September, including the game Monday night between the Detroit Lions and the Green Bay Packers, with the rest of the schedule to be determined.

ESPN and other networks spent years trying to hire Peyton Manning as a color commentator, and he finally agreed to work in a system that demands a lot less work and travel than the main broadcast. He appears live from a friend’s warehouse in Denver, while Eli appears from his home in New Jersey.

And it is not just ESPN presenting sports in multiple ways. This month, Triller provided an alternate commentary stream featuring Donald J. Trump for a pay-per-view boxing card. CBS and Nickelodeon announced they would once again produce a slime-filled, kid-friendly telecast of an N.F.L. playoff game. NBC, Fox, Amazon and others have their own versions of alternate telecasts.

Such telecasts go back to at least 2004, when ESPN showed a behind-the-scenes feed of a college football game, or perhaps to 1980, when NBC tried an announcerless broadcast with just the natural sights and sounds of the game. But the modern alternate broadcast dates to 2014, when ESPN first tried out its “megacast” presentation of the college football national championship game, with feeds featuring play breakdowns, celebrity guests, home team radio audio and other commentators.

It is no coincidence that ESPN has been the biggest proponent of alternate feeds. Unlike many of its competitors, it controls numerous sports channels on which alternate feeds can be run. But with the rise of powerful internet and streaming services, alternate feeds do not need to be placed on television channels.

“There isn’t a finite number of streams,” said Sam Flood, the head of sports production at NBC.

Until recently, alternate feeds were mostly targeted at hard-core fans. Alternate telecasts with coaches breaking down plays or using advanced statistics are less likely to attract a casual fan. Instead, they draw established fans who want to learn more or stay engaged in a game that is boring or a blowout.

The Nickelodeon game, however, attempts to get children and families who otherwise would not watch football to do so, and Triller’s stream with Trump was not for the boxing fan, but for perhaps the boxing-curious fan who would be drawn in, for one reason or another, by the former president.

“We are aiming at people who never really watch boxing, some who don’t know what Triller is,” said Thorsten Meier, the chief operating officer of Triller Fight Club.

The dirty little secret of alternate feeds, however, is that nobody watches them. Not nobody, exactly, but nobody in television terms.

About 14.5 million people watched the standard telecast of the Baltimore Ravens and Las Vegas Raiders game in Week 1 of the N.F.L. season, while just 800,000 people watched the presentation by the Manning brothers. Just 5 percent of the audience chose the alternate telecast. In some ways, though, that is a great success — whatever is on ESPN2 during “Monday Night Football” usually draws only hundreds of thousands of viewers, anyway.

But no matter how loudly fans might complain about announcers or wish telecasts did more of this or less of that, the fact remains that when presented with alternatives, viewers usually stick with what they know. Meier of Triller did not have final numbers, but he said the Trump alternate commentary was the least popular one of the night, behind the traditional English-language and Spanish-language commentaries.

Networks also have to be careful about cannibalization. Most media companies that own sports rights these days belong to huge conglomerates with numerous concerns — ESPN is owned by Disney, which also owns ABC and cable channels like FX. The company could show versions of football across ABC, ESPN and ESPN2, or show a sitcom on ABC, football on ESPN and a different sport on ESPN2. Homing in on fans of a specific sport or trying to attract casual fans can come at the cost of other corporate priorities.

Where alternate telecasts really shine, then, is as a laboratory. They are often where new things in televised sports are tested before they are ready for prime time, such as which advanced statistics to show fans, and how to do so. When sports television is inevitably saturated by odds and betting data in the coming years, you can be sure it got its start on betting- and fantasy-focused alternate streams.

For the last few years, NBC Sports has shown the final championship NASCAR race on NBC, as well as a feed focused just on the four drivers in championship contention on its cable channel, NBC Sports Network. That experience has led the network to incorporate an occasional focus on just one driver for a few laps during its regular showings of the NASCAR Cup Series.

“We really lean into a specific driver for a little bit longer, and it creates a stronger bond between the driver and audience,” Flood said.

If the future of sports watching is fans choosing exactly the kind of announcer or experience they want, why not take the idea further? Amazon, which shows N.F.L. games on Thursdays and owns the rights for a number of different sports in Europe, already provides several different commentary streams for those games.

But Amazon also owns Twitch, the streaming platform most heavily associated with video games — where at any given moment you can find thousands of people, some of them professionals with a huge audience and some of them amateurs with no audience, commenting while playing video games or doing other things. Amazon has shown some games on Twitch with handpicked and hired hosts, but it is not a free-for-all open to thousands of different commentators.

For one, there is a rights issue. The N.F.L. sells Amazon the right to do very specific things, which does not include allowing anybody who wants to comment on games on Twitch, and therefore allow anybody to watch on Twitch and bypass traditional ways of viewing.

But even if they could do so, Marie Donoghue, the head of global sports at Amazon, is not sure they would want to. “We don’t know if infinite choice is what fans want,” she said. “We do think fans want great optionality, but we have to learn, because if you give fans infinite choice it may become overwhelming, and they get lost in the experience.”

Infinite may not be on the horizon then, but more certainly is.

Next year, when Amazon actually produces the N.F.L. games they show, there will almost certainly be more options. Meier said Triller was getting ready to “rock the world with a completely new concept” in boxing, while Rolón said ESPN would expand its alternate telecasts as technology allowed it to do so.