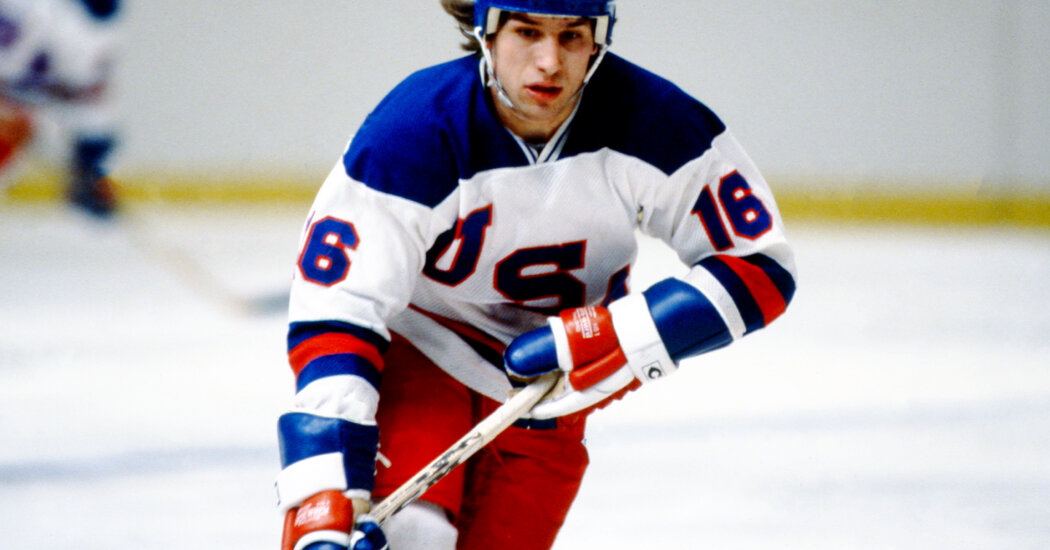 The Long, Sad Decline of Mark Pavelich, a ‘Miracle on Ice’ Star

Mark Pavelich appeared to be doing well in recent weeks.

Pavelich, who set up the United States’ winning goal in the “Miracle on Ice” upset of the Soviet Union at the 1980 Olympics, was receiving mental health treatment at Eagle’s Healing Nest, a rehabilitation center in a wooded part of Sauk Centre, Minn., where he had been living since October.

“He seemed optimistic,” said Bill Baker, an Olympic teammate who spent an hour strolling the Healing Nest grounds with Pavelich last month, talking about pastimes they shared — hunting and fishing. “He seemed like he was wanting to put this behind him.”

That was a reassuring change for friends of the hockey star, who played five seasons with the Rangers after the Olympics. They had spent the last several years worrying about Pavelich, who in 2019 was found to have beaten a neighbor with a metal pole. Charged with felony assault, he was committed by a court to a state psychiatric hospital in Minnesota. 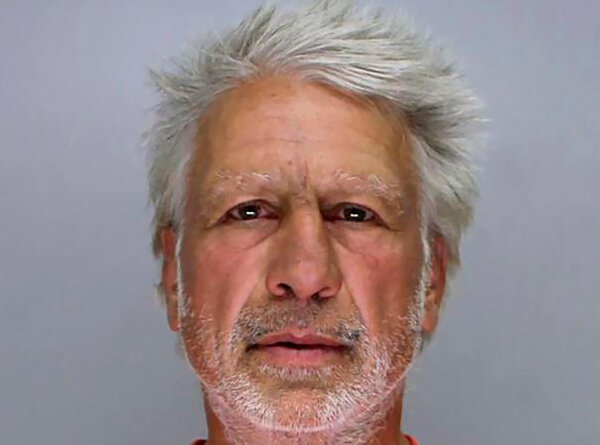 The incident was the most serious in a pattern of trouble for the man they knew as a wizard on skates and a gentle soul off the ice. Some family members and old teammates had begun to wonder if Pavelich, like a number of other former professional athletes, was suffering from mental illness brought on by blows to the head during his playing days.

On Feb. 28, his Olympic teammates joined in group text messages wishing him a happy 63rd birthday, and Pavelich seemed to enjoy hearing from his gold-medal brothers.

Four days later, he was found dead by a staff member at the treatment center. A cause of death has not been determined.

“Maybe it was a heart attack. We just don’t know at this point,” said Mike Eruzione, the captain of the 1980 team and the player who scored the winning goal against the Soviets, after Pavelich got him the puck.

In a message posted on Facebook, Pavelich’s sister, Jean Gevik, said her brother’s brain would be analyzed for signs of chronic traumatic encephalopathy, a degenerative brain disease believed to be caused by blows to the head. “I have no doubt it will be riddled with disease,” Gevik wrote.

“This is an unbearable time for my family,” she wrote. “The news is absolutely devastating. The last flicker of Mark’s candle went out. Way too much trauma and way too much hurt. A life cut short.”

C.T.E., which can be diagnosed only after death, has been found in dozens of former athletes who had mental difficulties later in life. The N.F.L. star Junior Seau, as well as other athletes who died by suicide, was found to have had the type of brain damage associated with C.T.E.

The news of Pavelich’s death angered at least one teammate who had tried to help him though his mental and legal difficulties — Barry Beck, a former Ranger. Since Pavelich was declared “mentally ill and dangerous” by a county court judge in 2019, Beck had used Facebook to provide updates on Pavelich’s condition, and to call on the N.H.L. to do more to help former players struggling with mental illness that might stem from head injuries.

“I’m deeply saddened, shocked and overcome with grief upon hearing the news of Mark Pavelich’s death,” Beck wrote on Facebook from Hong Kong, where he has coached hockey for more than a decade.

Beck suggested that the N.H.L.’s 2018 settlement with hundreds of retired players, who had accused the league of hiding the dangers of head hits, was inadequate. The N.H.L. set aside $19 million to help the former players, far less than the potentially $1 billion settlement the N.F.L. made with its former players.

“After the C.T.E. lawsuit, the N.H.L. was just happy they didn’t have to discuss it anymore,” Beck wrote.

The N.H.L. offered condolences to the Pavelich family in a statement.

In a statement the Rangers said: “Mark helped inspire a nation through the integral role he played on the ‘Miracle on Ice’ team in the 1980 Winter Olympics. Our thoughts are with Mark’s loved ones during this difficult time.”

Pavelich grew up in Eveleth, in a rugged, sparsely populated area of Minnesota known as the Iron Range. Undersized at 5-foot-7, he was a quick, darting skater who seemed to sense where the puck and his linemates were headed. After starring at the University of Minnesota Duluth, he made the 1980 Olympic team, coached by Herb Brooks.

Brooks put Pavelich on a line with two other Iron Range players — Bill Schneider and John Harrington, who was a Minnesota Duluth teammate. They clicked, scoring more points than the three other U.S. lines at the Olympics, and Pavelich was the catalyst.

“He was a genius, how quickly he could think the game,” Harrington said.

Against the Soviets, Pavelich sent the puck to Schneider on the left wing, and his slapshot tied the game, 1-1. In the third period, with the game tied at 3-3, Pavelich tipped the puck from the boards to the middle of the Soviet zone just as Eruzione was crossing the blueline. Eruzione’s wrist shot put the U.S. team, made up primarily of college players, ahead of the Soviets, a team of mostly professionals. Two days later, the United States defeated Finland to win the gold medal.

After the Olympics, Pavelich played a season in Switzerland before signing with the Rangers, who had hired Brooks as their head coach. Pavelich totaled 76 points in 1981-82, which is still the team record for a rookie. In 1983, he scored five goals in a game, becoming the only player born in the U.S. to do so.

He was at ease around hockey, but the spotlight off the ice cast an unwanted glare. When Eruzione was doing color commentary on Ranger broadcasts, Pavelich declined even his requests for interviews. “Finally, the network offered $1,000 in hunting and fishing equipment, and Mark said, ‘OK, I’ll do it,’” Eruzione recalled.

When Sports Illustrated in 1999 named the “Miracle on Ice” the greatest sports moment of the 20th century at a gala at Madison Square Garden, Pavelich stayed home in Minnesota. “It’s too glitzy for me, Rizzo,” Eruzione recalled him saying. In 2002, the 1980 team was chosen to light the torch at the 2002 Winter Olympics in Salt Lake City. Again, Pavelich stayed home.

After hockey, he settled into a remote cabin near Lutsen, a village in the far northeastern reach of Minnesota, on the shore of Lake Superior. Few knew what he had carried with him for years. Before going to college, Pavelich had accidentally shot and killed a friend while hunting. In 2012, his wife died when she fell from an unfinished balcony they were adding to their home.

“Mark actually died years ago when he lost his beloved Kara,” Jean Gevik wrote on Facebook.

After that, Pavelich’s odd behavior became more pronounced. He suspected that one neighbor was putting substances into his truck’s gas tank. When another neighbor brought him cookies, he thought they were poisoned and stored them in the freezer.

When the Olympic team began a fantasy camp in Lake Placid, Pavelich brought his dogs but no equipment. Organizers scraped together some gear and old skates, and soon Pavelich was hopping the boards and skating as he had in the glory days.

To Schneider, his linemate seemed fine, but stories he’d heard about Pavelich made him wonder. “You had to think, ‘Is maybe something slipping?’” he said.

On Aug. 15, 2019, Pavelich went fishing with another longtime neighbor, Jim Miller. At some point, Pavelich became convinced Miller had spiked his beer, and Pavelich attacked him with a pole. Miller sustained broken ribs, a bruised kidney and other injuries.

Found incompetent to stand trial, Pavelich was sent to a psychiatric institution that treats offenders with the most serious mental illnesses. “Rizzo, I’m the sanest guy here,” he told Eruzione. Beck worried about Pavelich, phoning him several times a week from Hong Kong. “Pav needs to be moved to a treatment center and not detained in the facility he is presently in,” Beck wrote on Facebook. “He won’t get the help he needs there.”

Last fall Pavelich was moved to Eagle’s Healing Nest, which treats primarily veterans with post-traumatic stress disorder. There he was able to fish, as well as have his dogs, frequent visitors and passes to leave for lunch with friends.

By all accounts, Pavelich seemed to be improving, although Beck said that Pavelich told him last month that he was anxious about the next hearing in his case.

On March 4, Schneider got a call from a friend who had heard a rumor that Pavelich had died. He called Baker, and they pieced together the sad news. Schneider recalled visiting last fall, and being struck by the contrast between the Pavelich he read about in the newspaper and the quiet man he saw at the fantasy camp and other Olympic team gatherings.

“He felt safe around us, you know,” Schneider said. “It was a family.”