Home » Sport » The Knee’s Better. Deshaun Watson’s Better. And the Texans Are Better. 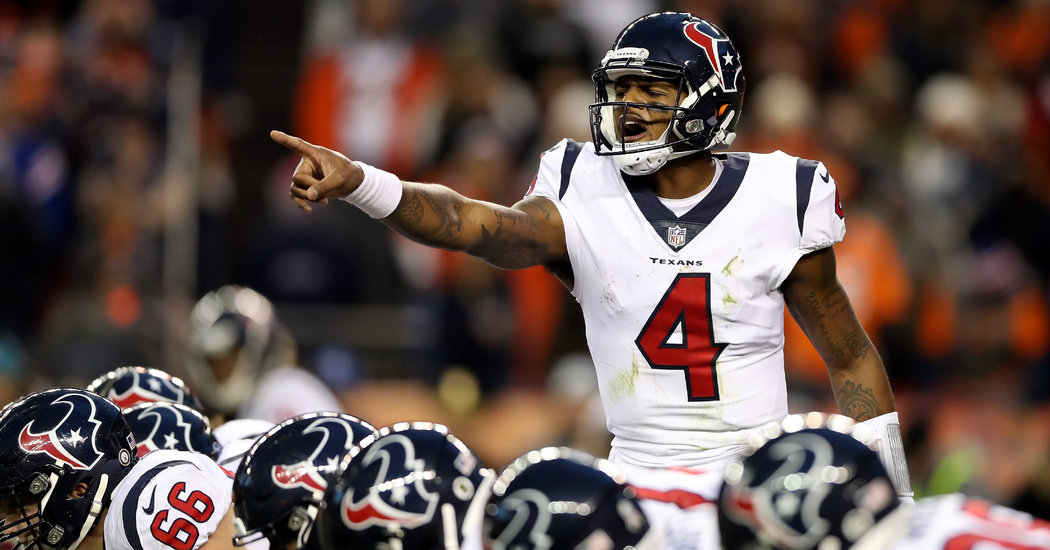 The Knee’s Better. Deshaun Watson’s Better. And the Texans Are Better.

HOUSTON — The flashes came, at first, in jagged intervals: a sharp cut, a smooth scramble, an assertive plant-and-throw, the ball whistling toward a receiver. One after another, these flashes tantalized Deshaun Watson’s coaches and teammates on the Houston Texans, and in time they became expectations, and soon thereafter — a few games into this season, give or take — those expectations matured into a state of predictable comfort.

There was no revelatory moment. One day, it just sort of happened. Watson, one of the N.F.L.’s singular talents — a player who just might have set all sorts of rookie quarterback marks had he not torn a knee ligament, halting his 2017 season seven games in — resembled his former self in full, only a more refined version of it.

The Texans have not lost since September because of a methodology that refutes the N.F.L.’s movement toward bazillion-yard passing days and optional defense. In winning their last nine games heading into Sunday’s against Indianapolis, they have demonstrated an aptitude for denying points and running the ball — which, if one has monitored their travails over the last decade, has more or less been an organizational mission statement.

What distinguishes these Texans from their forebears that tried and failed to upend the A.F.C. establishment is their confidence in their quarterback, a position that has bedeviled the city longer than the franchise. Watson’s combination of mobility, instincts and passing acumen places Houston in scoring position anywhere on the field, though he has honed his recognition not to force a big play at the expense of a wiser decision.

Through 12 games, Watson has not surpassed his performance from last season, when he set a record by throwing for 19 touchdowns across his first seven games, so much as he has certified his capacity for growth in an unforgiving league. 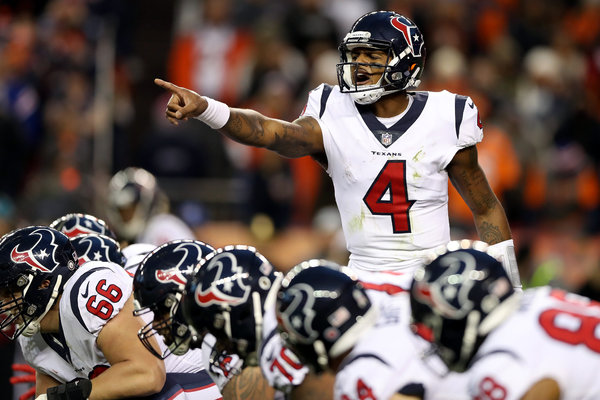 A year later, Watson is completing more passes to his teammates (66.5 percent to 61.8) and fewer to his opponents (2.5 percent interception rate to 3.9). His highlights are littered with touch passes and pocket awareness and anticipatory mastery, like the 2nd-and-11 dart he fired before DeAndre Hopkins had slipped past a lurking linebacker last Sunday against Cleveland. Only Drew Brees has thrown more touchdown passes (20) in the red zone without an interception than Watson (17), who has committed only two turnovers total in the last six games.

Watson is thriving in ways obvious and understated, and the totality of his evolution has left opponents dazed.

“I’m really just doing what I do: playing smart within the system, protecting the ball and getting wins,” Watson said outside the Texans’ locker room Wednesday before practice. “But I don’t put limits on myself. I don’t compare myself to anybody else. If that’s being the best ever who played this game, I can be as good as I want to be.”

Already Watson, 23, is the best quarterback to play in Houston since Warren Moon helmed the old Oilers with distinction. The successors who have moseyed through here over the past 25 years, with the Oilers and later the Texans, read like grand marshals at the Backup Day Parade: Billy Joe Tolliver, Cody Carlson, Brian Hoyer, Brock Osweiler, and on it goes. The four times the Texans reached the playoffs since their inception in 2002, their defense propelled them in and their offense knocked them out.

The arrival of Watson, after Houston traded up to draft him at No. 12 over all in 2017, enchanted a city and transformed the organization.

“He just has this aura, this presence, about him,” said his backup Brandon Weeden, who spent training camp in 2017 with the Texans and rejoined them in March. “Every time he called a play, you thought it was going to be a big one.”

Watson seized the starting job after replacing Tom Savage in last season’s opener, beginning a spree that captivated the league. He belonged to the Texans, and he was all theirs — until he wasn’t.

Four days after accounting for 469 yards and 4 touchdowns in a loss at Seattle, Watson rolled right in practice and crumpled, untouched, his right knee shredded. That night, Quincy Avery, his private quarterback tutor and a dear friend, flew in. Even now, Avery remembers how calm Watson seemed. Happy, even.

Having endured the same injury once before — he tore his left anterior cruciate ligament at Clemson — Watson understood the rehab process. The bad days did not discourage him. The good days reassured him.

“Every situation,” Watson said, “I knew and expected.”

The familiarity helped him compartmentalize, focusing on his recovery but also football. Reviewing his game film from last season, Watson noted how some passes missed by mere inches. His feet, at times, spread too wide, causing his head to bob. His chest and head tended to tilt, duping him into perceiving the target was moving more than it was.

“When the dude got off-schedule a bit,” Avery said, “his throwing motion would be a little different each time.”

Watson set about improving his balance and posture so that he would release from the same platform every time, whether throwing in rhythm or after eluding defenders. Achieving that consistency has enhanced his credentials as a passer.

“We love running quarterbacks because there’s not a lot of them, and when you find one like Deshaun, we become engulfed in that,” said the former N.F.L. quarterback Dan Orlovsky, now an analyst for ESPN. “But we forget that he’s really a ridiculous quarterback who happens to be married with incredible athleticism rather than somebody who’s a great athlete that just happens to be able to throw.”

In the Texans’ first five games, Watson threw a lot — 192 times in all — and opponents pummeled him. He faced pressure on 45.7 percent of his dropbacks, second only to Josh Rosen of Arizona during that span, according to Pro Football Focus.

Out of necessity, the Texans adapted. Their 20-13 victory against Buffalo on Oct. 14 heralded a philosophical shift. Since then, Houston has attempted the fewest passes in the N.F.L. From studying the Texans, Orlovsky has detected more presnap motions and dual play-action to slow defensive linemen. The Texans’ rushing success has amplified their commitment to play-action passing, and in those circumstances over their last seven games Watson ranks among the league’s best in passer rating, yards per attempt and touchdown passes, according to PFF.

Now and beyond, the Texans accept their responsibility to optimize Watson without exposing him to unnecessary danger, a task quarterbacks coach Sean Ryan described as “a happy challenge.” In their parlance, they remind him to recognize when the journey’s over — to duck, slide, fling the ball away, do whatever necessary to evade contact instead of initiate it, as he did in a Week 5 win against Dallas that battered him with a broken rib and a partly collapsed lung.

Rather than rest, Watson started the next game against the Bills. Rather than stay back when doctors advised him against flying to Jacksonville, Watson traveled there in a luxury bus, 12 hours each way.

“He could have protected his future,” cornerback Johnathan Joseph said. “We all have a career and agents in your ear, financial people, family members. He made the decision to play, and that will always just stick with me.”

For Weeden, the takeaway from that afternoon materialized midway through the first quarter. On 1st-and-10 from the Houston 20, the Jaguars’ pass rush collapsed the pocket, and Watson escaped, staggering backward. Steadying himself, he bolted toward the Texans’ sideline, beating two defenders there to avoid a hit.

The evidence had been mounting for weeks, but for Weeden it crystallized right then and there. With that scramble, Watson had ceased being a quarterback returning from a severe injury. He was just Deshaun Watson, the Texans’ quarterback savior, capable of anything and everything yet again.