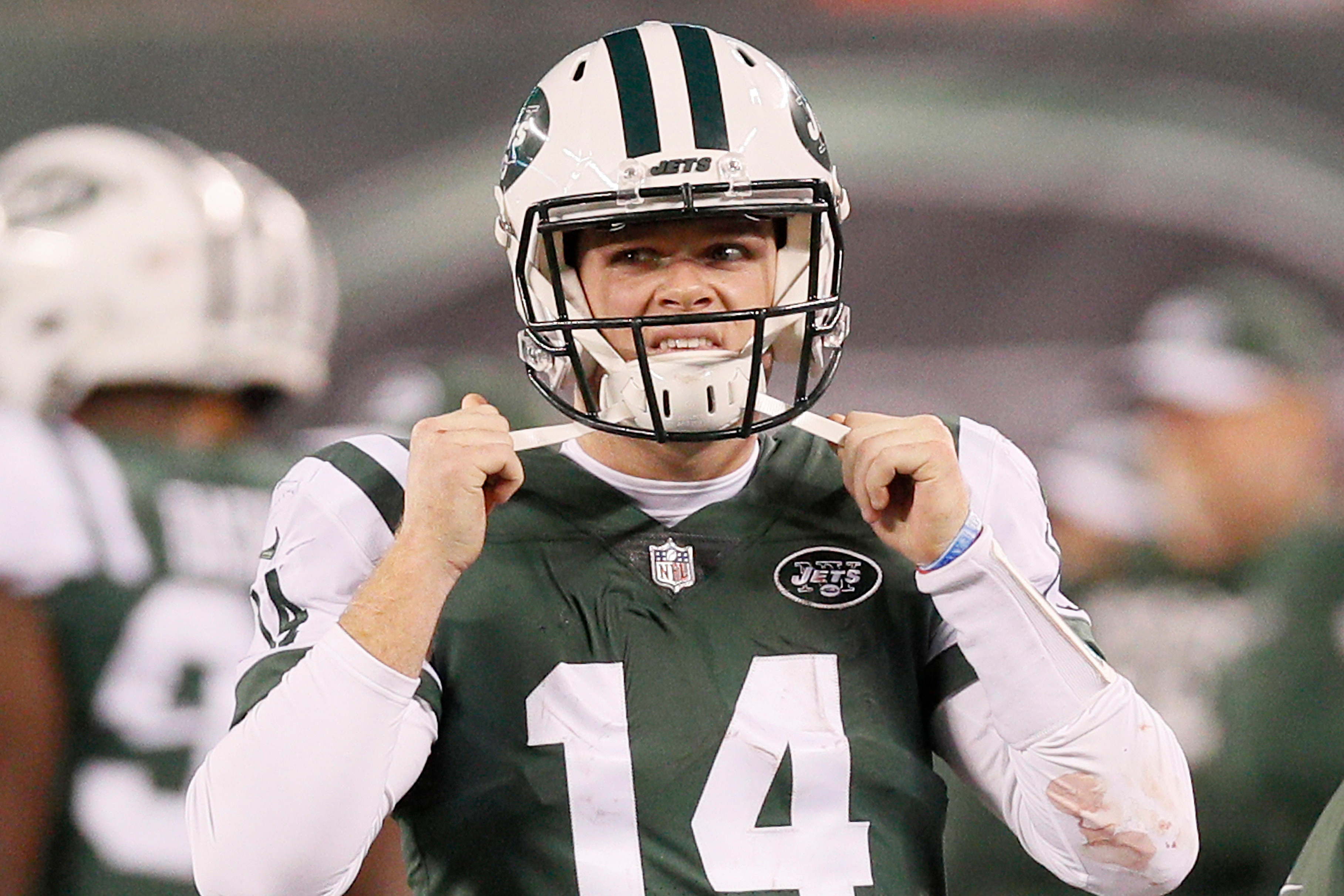 The statements, delivered loudly and boldly and in no uncertain terms Saturday at MetLife Stadium by Sam Darnold:

You ain’t seen nothing yet.

You have seen the future, and it’s me.

This was the day that Sam Darnold threw off his baby shoes and began walking tall.

This was one more small step for a boy growing into a man, one giant leap for Jetkind.

This was the Samchise at his best.

Darnold scared the hell out of the playoff-bound Texans, with his arm and with his legs, and when the cavalry arrives to help him, he will beat them one day, and one day soon.

He was a 29-22 loser only because Deshaun Watson found unstoppable DeAndre Hopkins with a 14-yard TD pass against Mo Claiborne with 2:15 remaining, and Darnold was out of magic and out of help from Robby Anderson when he got his two last desperate chances.

But 50 years after Super Bowl III, Darnold (24-for-38, 253 passing yards, two touchdowns, zero interceptions, 35 rushing yards) provided a compelling reminder he is the oasis in the desert, the crown jewelry of the New York Jets.

He was an improvisational genius, laughing in the face of third-down danger. He was in total command, fueled with swagger, and he made everyone around him better, completing passes to nine different receivers.

There was Sam Darnold, throwing on the run early in the fourth quarter, firing a 25-yard strike on third-and-8 to Chris Herndon and distributing praise to his offensive line afterward.

“The ball’s supposed to come out relatively early on that play, and I thought they did a great job knowing that I was gonna continue to run around and try to make plays, and our receivers did a great job of trying to get open,” Darnold said.

There was Sam Darnold, scampering around left end, a 14-yard run on third-and-10 to the Houston 2, two plays before Elijah McGuire was dragged into the end zone, and it was Jets 22, Texans 19 with five minutes left.

“Saw a lane and took off,” Darnold said.

There had been one early dreamy drive, capped by one dreamy play, that offered a glimpse into the future and allows Jets fans to dream about what can be one day with their Samchise.

It came late in the second half when Darnold, down 16-3, dashed out of bounds for 10 yards on third-and-3.

Then, flushed to his left with a defender in his face, Darnold found Herndon for 16 yards.

He hit his next three passes for 24 yards before rifling one to Anderson at the 5.

The Jets called their third and final timeout with 35 seconds remaining before intermission.

And here came vintage Darnold: threatening a run up the middle before flicking his wrist and finding Anderson in the end zone.

“Looked one way, and then saw that I had some time and scrambled out, and was able to dish it out to him for a touchdown,” Darnold said.

Now he was feeling it in the third quarter, sprinting out to his left and delivering a perfect strike to Anderson by the left sideline for 20 yards before finding Andre Roberts with the 13-yard TD pass on third-and-5 that would have tied the game if Jason Myers hadn’t somehow missed his second PAT.

Darnold’s evolution is not lost on mentor Josh McCown.

“I just think he continues to process at a high rate faster and faster … coming off his break and the [foot] injury and then coming back, he’s playing faster,” McCown said.

“Coming out of college, the playmaking skills were there, we saw that on the tape, but it was just, ‘Can you play from the pocket and win from the pocket?’ and he’s showing us he can do both, and that’s critical, because the other stuff you can’t coach.”

“You’re gonna be a great pro,” Watt told Darnold afterward on the field.

It is not lost on anyone.

Darnold looked like the quarterback version of Saquon Barkley.

“That’s why you pick that high, ’cause you want a guy that can do things that are rare,” McCown said, “and it’s fun to see that stuff start to come out, but I don’t think you see it without the growth from inside the pocket, and I think that’s the difference.”

Darnold’s explanation for a fourth-and-14 desperation bomb that Anderson should have caught was Eli Manning-esque.

“I gotta put it in a better spot. Just gotta connect there,” Darnold said.

“I feel like I’m seeing the field a lot better, and I feel like our whole offense is really starting to click a lot better getting in and out … but it comes down to wins and losses,” Darnold said. “That’s the whole point of playing, you want to win.”

Once he has a better team around him, no one doubts that he will.

Here’s Every New Celebrity Couple From 2018, Because It Was A Wild Year