Home » Sport » The disturbing truth this loss reveals about the Knicks 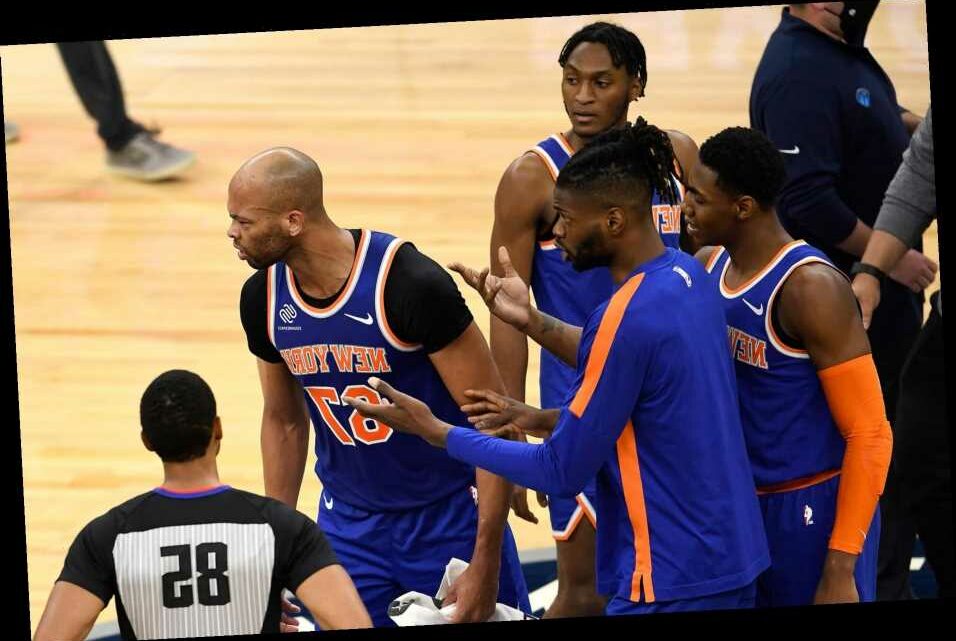 The disturbing truth this loss reveals about the Knicks

Mets will have to meet Jacob deGrom's high standard

Gonzaga has shot to make a certain kind of history

Nets can look to Yankees as billion-dollar cautionary tale

This hadn’t been part of the narrative, and it didn’t seem likely to be Wednesday night. The Knicks led the woeful Timberwolves by 18, though Minnesota shaved all but a point off that lead by the half. The Knicks led by 11 after three quarters. The Timberwolves were 11-36. They are well versed in losing. The Knicks only had to finish them.

The Knicks didn’t finish them.

The Knicks collapsed in every way across the most brutal fourth quarter of the season, allowed the Wolves to hang around long enough for Malik Beasley to drain a gut-punch 3 with 37.8 seconds left in the game, giving the Wolves a 102-101 lead, their first since 7-6.

It ended that way, amid a couple of brutal possessions late. It ended that way and the Knicks crashed back to .500 at 24-24 and somehow it felt far more ruinous than that. The Knicks have mostly made a habit of beating teams they’re supposed to beat. They’ve mostly avoided catastrophes like this, sidestepping one such worrisome ending against these Wolves at the Garden Feb. 21, when they’d blown a 21-point lead but recovered.

There was no recovering this time.

This one hurts. This one stings. This one leaves a mark, and might be worth remembering at this time next month, when the Knicks are officially in the home stretch for a slot in the expanded postseason. The Knicks may be better than expected, but they are still not good enough to waste opportunities like a game against the NBA’s worst, especially up 18.

They need to bank as many of these as they can.

“If you let your guard down even a little bit,” an evidently annoyed Knicks coach Tom Thibodeau said, “you’re going to be in trouble.”

Maybe it is a sign of all the good that has come before that a game played on the last day of March can actually cause such angst and anger among the faithful. When the calendar turns to April, Knicks fans have lately already turned the page toward summer, toward the draft, toward free agency, toward Next Year. So in a wicked way maybe the agony of an awful loss is a good thing.

Or maybe not. It’s just hard to feel that way if you are the Knicks right now, not with a week coming up that includes games against the Mavericks, Nets and Celtics, not with a long western swing staring at them in a month’s time, not when they have asked all year to not be graded on a curve. The Knicks want us to believe as they believe. Mostly, that’s happened.

Still able to lose to anyone in the league.

“It’s disappointing, we had a big lead in the first half and didn’t take care of it and we repeated it,” Thibodeau said. “I’m disappointed because of turnovers. We beat ourselves.”

Even though the Knicks opened the fourth looking a little ragged it still seemed the cushion they’d given themselves might hold. They still led 90-77 with just under nine minutes to play. That math ought to work against a team playing out the string.

Only for the rest of the game it was hard to tell who is playing out the string and who is fighting for a top-10 slot in the East. As often as we say the Knicks’ margin is razor thin it really hits home when you see up-close what razor-thin really looks like. A few turnovers, a few sloppy minutes and cruise control became damage control.

And by then, too much damage had already been done. RJ Barrett had been terrific most of the night (23 points) but had two awful turnovers late, had a brain cramp in allowing a key three-point play to Anthony Edwards, foolishly fouling Edwards when he had an easy layup, a play that cut the Knicks’ lead from 10 to seven and seemed to galvanize the Wolves.

Then he missed the potential game-winner at the buzzer. And the Knicks walked off the court with an “L” that should’ve been emblazoned in scarlet across their blue road unis.

“We allowed them to stay in the game,” Barrett said, “and you can’t allow that.”

“We have to take care of business,” said Julius Randle, who also scuffled late after turning in a workaday 26-point, 12-rebound, six-assist night. Business was left on the table at the Target Center Wednesday night. This one will leave a mark.