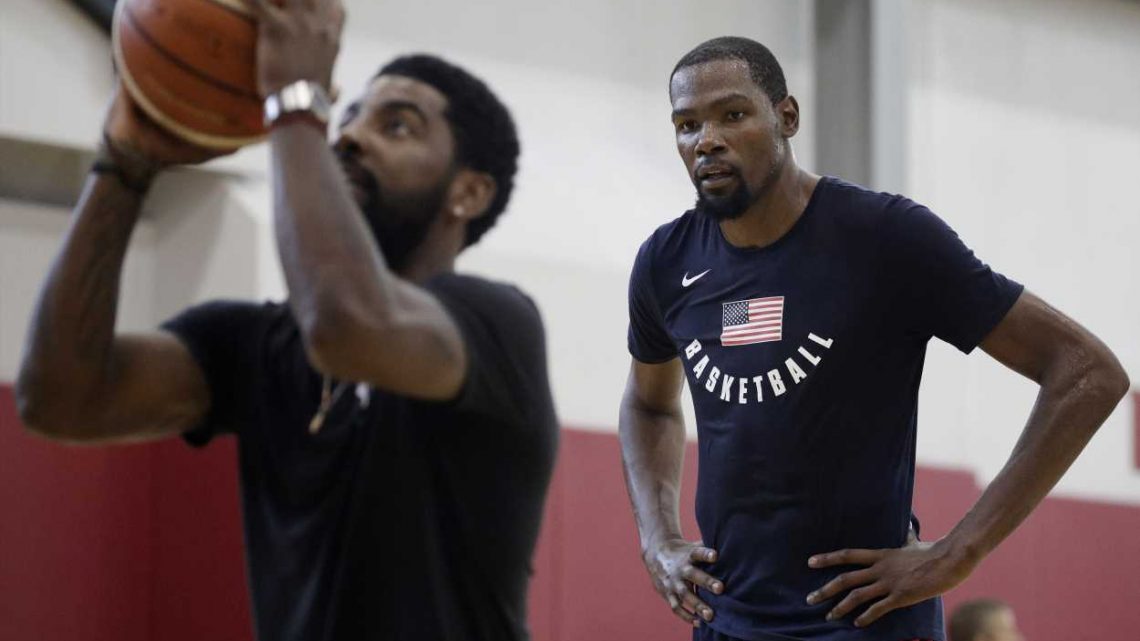 The NBA offseason has been fast and furious, and just a few days after the start of free agency we’ve seen some of the biggest stars in the league sign in new cities.

In the East, Kevin Durant and Kyrie Irving spurned the Knicks in favor of the Nets, while other teams like the Bucks and Sixers reloaded for another run at the title. In the West, the Clippers reshaped the league by landing Kawhi Leonard and Paul George. Several other Western Conference teams made moves to make a run at the title, too.

It’s a brand new landscape, and as the dust settles after the first few days of free agency, some clear winners and losers have emerged.

Take a look below at the winners and losers of the first days of NBA free agency.

After the New York Knicks hinted all year at the possibility of signing both Kyrie Irving and Kevin Durant in the 2019 offseason, the Brooklyn Nets swiped both superstars from under their noses.

The Nets already had a talented core of young players, and the upgrade of Irving over D’Angelo Russell this season should at least keep them as a feisty team to watch in the East. Once Durant returns from injury next season, they might be considered the favorites to win the conference.

Kevin Durant’s injury in the NBA Finals was a blow to the coming season, but it didn’t keep him from signing a max deal with the Nets and joining Kyrie Irving in what could become the next superteam in the East.

Durant’s time with the Warriors was dominant, but in Brooklyn, he’ll have the chance to silence any doubters that remain.

In one fell swoop, the Clippers changed the NBA. The Clippers traded seven draft picks, plus an All-Rookie guard in Shai Gilgeous-Alexander, and solid veteran forward in Danilo Gallinari for Paul George. Doing so also netted them Kawhi Leonard, forming perhaps the best superstar tandem in the league.

Thanks to savvy roster-building, the Clippers still have plenty of rotation-worthy players to put around them in Patrick Beverley, Lou Williams, Montrezl Harrell, Landry Shamet, and Mo Harkless. This team should be a title-contender as soon as it steps on the floor.

The Knicks didn’t land Kevin Durant, Kyrie Irving, Kawhi Leonard, Jimmy Butler, or Kemba Walker. They didn’t get meetings with them. They pivoted and signed veterans and young players to continue their rebuilds, but it’s certainly not the path they preferred.

Regardless of where Kawhi Leonard chose to sign, he was going to end up a winner in this year’s free agency class.

After winning a championship with the Raptors in a one-year rental, Leonard got to choose his own destiny, ultimately deciding to pair up with Paul George on the Los Angeles Clippers in a midnight deal that stunned the NBA world.

Between the team’s already established core of talented role players and the arrival of George and Leonard, the Clippers are set to be one of the best teams in the NBA this year, with Leonard set as the master of his own destiny.

While the Lakers fell short of winning the Kawhi Leonard sweepstakes, it’s tough to label them losers after what has already been a busy offseason.

The Lakers landed the first major deal of the NBA offseason when they traded for Anthony Davis, and have since used free agency to fill out their roster with the likes of Danny Green and DeMarcus Cousins.

Considering last year’s free agent spree included names such as Lance Stephenson and JaVale McGee, it’s safe to say that this year’s signings are an improvement.

No one can take away the Raptors incredible championship run this year, but with the departure of Kawhi Leonard, Toronto’s chances of defending their title feel like a longshot.

While the team was able to retain most of their non-Leonard talent, losing the centerpiece of their championship run will be a tough blow to fans in the North.

Jordan, a close friend of Kevin Durant, received a four-year, $40 million contract from the Brooklyn Nets after they signed Durant and Kyrie Irving. Jordan’s athleticism and production have declined since his peak years with the Clippers, but he’s now on an eight-figure deal that will take him to age 34.

Many fans hoped the Sixers would "run it back" and retain both Jimmy Butler and Tobias Harris on max deals after trading both players mid-season.

That plan didn’t plan out, but the Philadelphia front office was still able to pull off some impressive moves to keep the team contending after Butler decided to take his talents to South Beach. Signing Al Horford to complement Joel Embiid turns two fierce competitors in the Eastern Conference playoffs into teammates, and nabbing Josh Richardson from the Heat should help to ease the pain of JJ Redick’s scoring leaving the team.

The Sixers offseason as a whole was a success, but there’s likely no player happier about the changes to the team than Ben Simmons.

The departure of Jimmy Butler and the team’s new composition heading into the season likely puts Simmons back to playing like a true point guard, rather than giving off some on-ball duties to Butler. Add to that the fact that he was offered a max extension worth $170 million, and it’s hard to imagine a player in Philadelphia having a better summer.

While other members of the Warriors core received max offers for their services after winning five straight Western Conference titles and three NBA championships, Andre Iguodala was dealt away to the Grizzlies so that the team could make room for incoming guard D’Angelo Russell.

Iggy is reported to be negotiating a buy-out which would allow him to join another contender possibly, so his story is likely not done yet, but it’s still surely hurt to be seen as cap space by his former team.

With Kawhi Leonard gone, the Eastern Conference is open to the Bucks and Sixers.

The Bucks opted not to match the $85 million contract offer for Malcolm Brogdon but did pay up to retain Khris Middleton, Brook Lopez, and George Hill while adding Robin Lopez and Wesley Matthews. Milwaukee remains deep and versatile and is in good shape as long as Giannis Antetokounmpo continues his upward trajectory.

The Heat have been locked in a middling, salary hell of their own making. They managed to escape it this offseason by trading for Jimmy Butler, which cost them Josh Richardson and Hassan Whiteside. Losing Richardson hurts, but the Heat, at last, have a true star, and they kept good young players like Justise Winslow and Bam Adebayo and valuable role players like Goran Dragic and Kelly Olynyk.

The Rockets were reportedly aggressively shopping everyone not named James Harden on their roster after Harden and Chris Paul had a falling-out that has since been disputed. They did not land Jimmy Butler in a sign-and-trade as they desired, and didn’t make any significant upgrades to the roster. The vibe in Houston can’t be too great after what’s been a tumultuous offseason.

The Thunder had to acquiesce Paul George’s trade request so he could go play with Kawhi Leonard. That hurts.

In doing so, the Thunder received the largest package ever for a superstar: seven first-round draft picks, an All-Rookie team member in guard Shai Gilgeous-Alexander, and a very good veteran forward in Danilo Gallinari. The Thunder are now equipped to blow up their team and rebuild (by trading Russell Westbrook) or flip their bounty of assets for another star to play with Westbrook.

In the last three years, Westbrook has seen two star players leave his side in Kevin Durant and now Paul George. The Thunder have not won a playoff series since Durant’s departure, all while Westbrook’s style of play has come under heavy criticism.

Westbrook is now said to be on the trading block, but his bloated contract (count that as a win for him) makes him difficult to trade. Suitors for Westbrook have been labeled as "desperate" teams who would trade for him, simply for the star power and talent, flaws and all. It’s unclear what the next chapter of Westbrook’s career looks like.

The Jazz are one of the biggest winners of the offseason after trading for Mike Conley, then signing Bojan Bogdanovic. Both players give the Jazz the extra dose of shooting and playmaking that was missing in recent years and made them too reliant on Donovan Mitchell. In a wide open Western Conference, the Jazz look like contenders in 2019-20.

The Hornets lost their star guard Kemba Walker to the Boston Celtics and got nothing in return after failing to offer him the max. Had the franchise known they didn’t plan on paying him big money, they should have traded him away at some point and gotten some assets back in return. Instead, the team is left to regroup without any real chance of being competitive.

The Pacers surprised everyone last season by hanging around the playoff race, even after Victor Oladipo went down with a season-ending quad injury. Losing Bogdanovic to the Jazz hurts, but in his place, the Pacers added Malcolm Brogdon, Jeremy Lamb, and T.J. Warren, giving them more depth on the wing and back-court.

If Oladipo returns to All-Star form, the Pacers will be back in the hunt for a top-four seed.

When the NBA announced that free agency would start at 6 p.m. of June 30 rather than midnight of July 1, it was a relief to sportswriters and die-hard fans across the country. As it turns out, it also made the first day of free agency absolutely bonkers, with new deals and rumors flying for hours on end.

It was a much better alternative than getting woken up throughout the night thanks to "Woj Bombs" on Twitter.

Another eyebrow-raising $10,000 bet was placed on the Lakers to win the 2020 NBA Championship, and some think it’s a sign they will sign Kawhi Leonard

The Warriors pulled off a fascinating retool as they lost Kevin Durant, and they may not be done yet