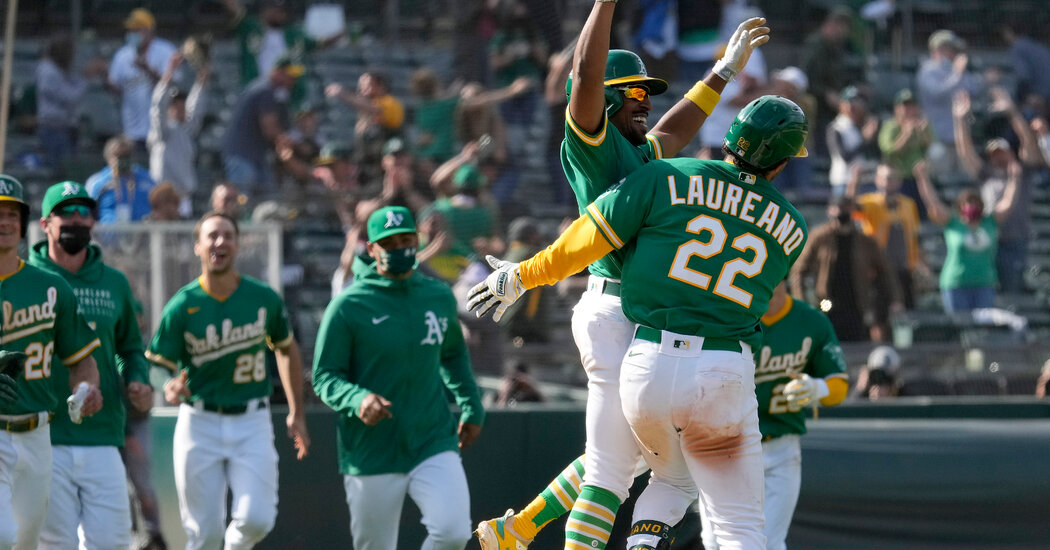 The A’s Bust and Boom Their Way to First Place

Bob Melvin shook his head and let out a raspy sigh behind the microphone at his Zoom news conference on Wednesday. Through the screen, it seemed to one reporter that Melvin, the manager of the Oakland Athletics, was having an emotional reaction to his team’s 11th consecutive victory.

“It’s not emotional,” Melvin said, smiling. “I don’t have any voice left.”

Even by the standards of baseball’s most all-or-nothing franchise, April has been a month to shout about. The A’s lost their first six games of the season for the first time in more than a century. They won a game, lost a game, and haven’t lost since.

“We didn’t just lose the first six games — we got boat-raced pretty much every night,” General Manager David Forst said in an interview Thursday, using baseball slang for blowout defeats. “There’s not a lot of rhyme or reason to it, but it was potentially demoralizing.”

The A’s lost those first six games by a collective score of 50-13, and the streak roused a musty stench from their ancient burial ground. The last time the A’s had started 0-6, in 1916, they were based in Philadelphia and went on to finish 36-117, the worst record in American League history.

It is fitting for the A’s to hold that mark. The shorthand story of their franchise goes like this: five titles in Philadelphia — still more championships than the Phillies, Eagles, 76ers or Flyers — but also 18 last-place finishes; a move to Kansas City for 13 losing seasons; then a move to Oakland, where they have reached the World Series six times, both in three-year bursts.

More recently the A’s have wrapped six playoff appearances around three last-place seasons. In 2021 they have bombed and boomed, all in three weeks. 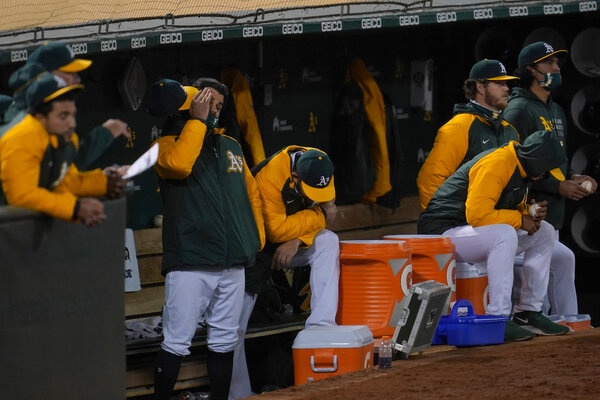 “Luckily we have a lot of history of not really coming to any conclusions in the first couple months of the season, let alone the first couple of weeks,” Forst said, before referring to Billy Beane, the team’s executive president of baseball operations.

“Billy’s on record, back to the ‘Moneyball’ days, as saying the first two months are evaluating what you have, and then you have a couple of months to make changes before the last two months, when you kind of sit back and watch. That said, we’ve never had anything quite as extreme as these two weeks.”

The A’s, who led the A.L. in homers and steals through Wednesday, will start a seven-game road trip in Baltimore on Friday. They left Oakland on a high: After shutting out the Twins in both games of a doubleheader on Tuesday, they survived a 13-12 thriller on Wednesday by scoring the tying and go-ahead runs with two outs in the 10th inning on a throwing error by Minnesota third baseman Luis Arraez.

It was the first time since 2009 that the A’s had won while allowing 12 runs in a game. But to hear the players tell it, the outcome was never in doubt.

“A win smells like — just like the Bay Area wind, you know? Like we’re just going to win,” he said. “You just smell it. We joke around all the time. After we had an hour half-inning, we joke around and we’re like, ‘Yeah, we’re pretty loose still.’”

The A’s had reason to be confident, even before their long winning streak. They cleared a stubborn obstacle last fall, advancing in the postseason for the first time since 2006 by taking a first-round series from the Chicago White Sox.

They lost a division series to the Houston Astros, three games to one, but retained a talented core led by Matt Olson and Matt Chapman, the Gold Glove sluggers at the corner infield spots, and a solid rotation of Sean Manaea, Chris Bassitt, Frankie Montas, Jesus Luzardo and Mike Fiers.

A newcomer was especially familiar to the A’s: second baseman Jed Lowrie, who returned for his third stint in Oakland, on a minor-league contract that guaranteed him $1.5 million for making the roster. Lowrie, 37, was an All-Star for the A’s in 2018, then signed a two-year, $20 million contract with the Mets that quickly became notorious.

Lowrie played only nine games for the Mets, all in 2019, and otherwise struggled with knee problems. He told The Athletic’s Peter Gammons this month that he had wanted to have surgery, but that the Mets would not let him. Lowrie finally had the operation last October, after his contract expired, and he is hitting .323 with a .916 on-base plus slugging percentage.

“Our medical staff felt really good about his ability to bounce back — and our training staff, they’re tough graders,” Forst said. “We ask them to look at a lot of risk assessments and they’re pretty straightforward. But we have history with Jed, so as soon as we cleared that hurdle, there was no reason not to take a chance on getting the Jed of old.”

The A’s lost a more expensive gamble in replacing closer Liam Hendriks, who — like so many stars before him — priced himself out of Oakland. After Hendriks signed with the White Sox for three years and $54 million, the A’s gave a one-year, $11 million deal to Trevor Rosenthal, who needed thoracic outlet surgery in early April.

Yet Lou Trivino has thrived in the late innings, appearing eight times in the 11-game winning streak with a 1.38 earned run average for the season. Trivino, 29, had been inconsistent for much of his career, but the veteran reliever Jake Diekman, his daily catch partner, said Trivino had learned to conserve his energy and get more from his body.

“Before he would play long-toss as far as he could for as long as he could, every day,” Diekman said. “And I’m like, ‘If you’re going to pitch in the back end of the bullpen, you’re going to get 65 or 70 appearances a year. You cannot do that every day.’ There’s certain guys that can, and they’re like an anomaly. For the most part, when you know that your arm is feeling the way it should, you need to shut it down and make sure your mechanics are good.”

Trivino faltered against the Twins on Wednesday, but the A’s rallied to win — without a hit, even — because lately that is all they do. Their smog-and-sunshine path has led them to a 12-7 overall record and a spot atop the A.L. West, exactly where they thought they’d be.

“Absolutely,” Forst said. “I wouldn’t have thought we’d get there the way we have.”

Here’s How Much Elvis Mitchell Is Worth