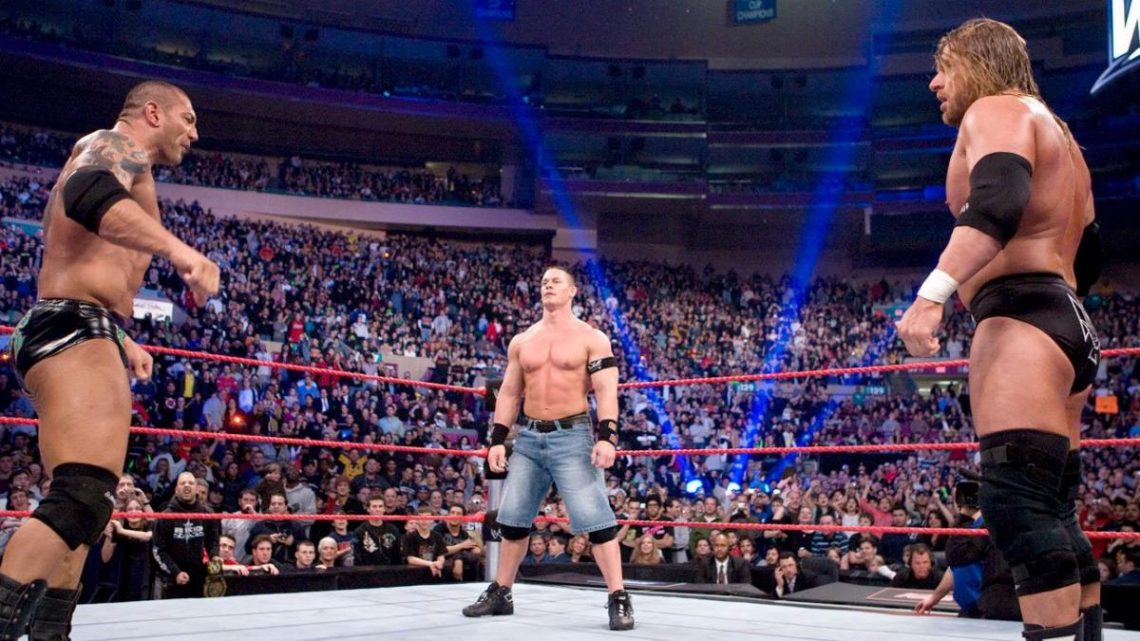 Without a doubt WWE’s number two PPV, the Royal Rumble, has provided wrestling fans with many stunning moments since beginning in 1988. Now seen as the first step on the road to Wrestlemania, the Rumble still grips fans with the same might it has done for over three decades. Here, we look at the event’s top ten defining occurrences.

Join DAZN and watch more than 100 fight nights a year

When WWE jumped aboard the reality TV craze that swept the world at the millennium’s beginning, the end result was Maven, a decent wrestler who was crowned Tough Enough champion at the end of season one. His appearance in the 2002 Royal Rumble made sense considering the brief popularity gained by the show, but nobody expected Maven to make such an impact in the match.

With The Undertaker in the process of getting heat to his heel biker gimmick, many believed that he would be the perfect foil for a returning HHH to eliminate, but WWE had other ideas. Maven, looking every bit the rookie he was portraying dropkicked the veteran and The Undertaker went all the way to the floor as fans looked on in shock. Okay, he returned to the ring and gave Maven an almighty beating, but the fact an established star had his Rumble hopes stolen by a newcomer provided the audience with an unforgettable moment.

Hulk Hogan and Ultimate Warrior had never stood in the same ring until the 1990 Royal Rumble occurred. With the priority being Wrestlemania 6 just a few months later, WWE was careful not to overdo it at the Rumble, but the brief exchange shared by The Warrior and Hogan left fans wanting more.

With neither man gaining a significant advantage during their collision, Hogan would get the last word on this night as he played a small part in Warrior’s elimination. Their effort at Wrestlemania that year sent shockwaves around the wrestling world and it led to the Rumble being the first port of call to get momentum behind the scheduled Wrestlemania main event.

8. Shawn Michaels Goes All the Way

Entering the match at number one in the 1995 Royal Rumble, nobody expected Shawn Michaels to still be there at the end. In a deliberate booking ploy to convince fans that “The Heartbreak Kid” had no chance of winning, WWE went against the luck of the draw logic and pinned all their hopes on Michaels carrying the match. He did so and he made it look easy along the way.

With The British Bulldog joining him at the start, it was the pair who began the match who ended up as the final two competitors, and those in attendance and watching at home were treated to a daring finish as Michaels took a huge risk to get the desired result. Threw over the top by Bulldog, Michaels clung onto the top rope like his life depended on it and after climbing back into the ring following an almighty struggle with himself, and the ropes, Michaels eliminated a celebrating Bulldog. The WWE were being far more creative with their Rumble finishes, but with Michaels handed full responsibility of getting this one right, they had no reason to worry.

7. The Debut of AJ Styles

It’s only hindsight that allows us to look back at this moment as defining because not much was expected of AJ Styles when he arrived in WWE in January 2016, and that’s nothing to do with the qualities of the Georgia veteran. Making a name elsewhere, a strong southern accent and small size are often negative traits when the WWE decide on pushing a star, but Styles had no such problems and has gone on to become the best wrestler on the company’s roster.

Competing in every major promotion prior to his arrival, Styles arrived at the Royal Rumble with a glistening reputation. With commentary praising his contributions to the industry, a rarity from WWE, Styles was made to look like the star he is from the moment his music hit. His showing at the event provided him with a platform to go on and have great feuds with the likes of Chris Jericho, John Cena, and Roman Reigns, which means his inaugural showing was designed with grand long-term plans.

6. The Legitimising of HHH

It’s hard to identify a more dominant year for a WWE superstar than the one enjoyed by HHH in 2000. His initial push had begun some months earlier with him turning heel and aligning himself with Stephanie McMahon, but it was his matches with Mick Foley at the beginning of the new millennium that catapulted him from mid-card hopeful to genuine attraction.

The 2000 Royal Rumble does not get enough praise when observing the event’s illustrious history, but HHH’s performance in a street fight against Cactus Jack is the standout moment from the event. A highlight reel career awaited the future son-in-law of Vince McMahon, but this was where it all started as HHH looked every bit the superstar he would become in one of the PPV’s greatest ever matches.

Essentially two Royal Rumbles, but the theme was present in consecutive years as Dave Batista and Roman Reigns felt the full force of the WWE audience as they voiced their disapproval at the treatment of Daniel Bryan.

After not even making the match in 2014, fans, hopeful that their hero would appear, turned their angst towards Rey Mysterio and Batista as they were not prepared to cheer anyone apart from Bryan. The former Evolution member was eventually crowned the winner, but the reaction that greeted him forced creative to change direction and Bryan became world champion at Wrestlemania 30 three months later.

The following year, most were split at who would win the event with Bryan and Roman Reigns being the two standout names. With Reigns receiving a monstrous push, WWE took no chances with Bryan stealing his spotlight so they eliminated him early in the match to a chorus of boos. Fans rejected Reigns throughout the match for this reason and even an appearance by The Rock could not help give Reigns the desired response WWE desperately craved for him.

Sidelined in October 2007 after sustaining what appeared to be a serious injury, John Cena was expected to be out of action for between 5-7 months and there were great concerns that the following year’s Wrestlemania was off the cards. Performing a Herculean recovery and limiting his ring time to only brief appearances, there was hope that Cena could return sooner, but nobody expected it to be at the 2008 Royal Rumble where he entered at number 30 to rapturous applause in an era when boos often greeted his entrance. Fans knew this was a moment for the ages.

Cena’s arrival sent the crowd into a frenzy and their attention was fully fixed on the match as they pondered whether the returning star could go on and win the match. With HHH a significant favorite beforehand, largely thanks to the expected absence of Cena, it came as no surprise that it was these two that closed the match. Following a number of strong exchanges, Cena eventually grabbed the advantage as he eliminated HHH and won his first Royal Rumble.

Don’t let people tell you that King of the Ring 1996 was the crucial point in the development of Stone Cold Steve Austin. Wrestlemania 13 was far more significant, as was the 1997 Royal Rumble. Entering at number five, Austin looked like a superstar immediately as he cleared the ring in a devastating manner. Sitting on the top rope and glancing at his wrist to see the time on his imaginary watch, Austin grew impatient as the clock ticked down to unveil the next entrant. When Bret Hart entered, one of wrestling’s hottest feuds intensified and the action was nothing short of sensational.

With Bret gaining the upper hand, he eliminated Austin from the match, but ringside officials were occupied with breaking up a fight between Mick Foley and Terry Funk as the hardcore legends took swipes at each other on the outside. Realizing that the referees failed to spot his eviction, Austin climbed back into the ring and would eventually be crowned the victor. The fallout from the match focused on Austin’s feud with Hart and as the hatred between the pair multiplied, their differences were eventually settled at Wrestlemania in one of WWE’s greatest ever matches.

2. Shawn Michaels and The Undertaker Close the Show

The 2007 Royal Rumble will always be remembered for the finishing sequence between two of the company’s greatest ever superstars. Although The Undertaker and Shawn Michaels had enjoyed better days in the WWE, both were still capable of performing at the highest level when it mattered and this was evident here as both were desperate to challenge for the gold at the upcoming Wrestlemania 23.

As the final two combatants, Undertaker and Michaels delivered a stunning ten-minute finish that threatened to cease on several occasions as both enjoyed nearly moments in equal measure before The Undertaker sampled victory. If this would’ve been the final exchange between the two icons then fans would’ve been given value for the money, but it was essentially a new beginning as they became embroiled in yet another rivalry just two years later. Perhaps it was the 2007 Royal Rumble where the initial seeds were planted.

When Ric Flair shocked the wrestling world and headed to WWE in 1991, expectations and hopes centered on him facing Hulk Hogan at Wrestlemania the following year. Instead, Flair’s breakout came at the 1992 Royal Rumble as he won the vacant world title that had been placed on the line by then-president, Jack Tunney.

Entering the match at number three, Flair’s lengthy showing combined with a stunning performance from a cheerleading Bobby Heenan on commentary ensured that this Royal Rumble match goes down as the greatest ever. With a stunning field of potential winners including Flair, Hogan, Sid Justice, The Undertaker, and Macho Man Randy Savage, fans were kept guessing until the very end. It came down to Hogan, Justice, and Flair, and with the two giants engaging each other near the ropes following Hogan’s elimination, Flair blindsided Justice to become WWE champion for the first time leading to one of the most believable post-match promos in history.

‘Heartlock’ Review: A Prison Kingpin Steals the Show in This Hackneyed Drama