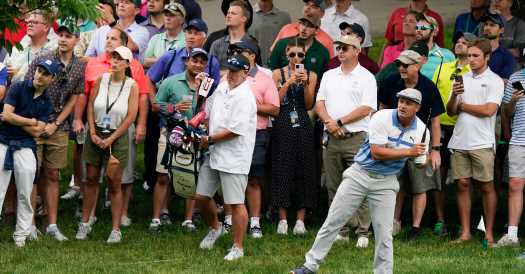 DUBLIN, OHIO — Bryson DeChambeau and Jordan Spieth played together in the first two rounds of the Memorial Tournament on Thursday and Friday, an arrangement that would starkly demonstrate how two top golfers, both 27, have developed such disparate followings in the sport.

For DeChambeau, it reinforced his status as a lightning rod for controversy. A recent social media feud with his golfing colleague Brooks Koepka erupted anew even though Koepka was not participating in the tournament or dropping a single snarky word on Twitter. Fans on Friday repeatedly taunted DeChambeau by calling him “Brooks,” or by shouting “Let’s go, Brooks-y,” which mimicked a video that Koepka posted on Twitter last week. It showed DeChambeau snapping at fans who yelled something similar after one of DeChambeau’s shots in the recent P.G.A. Championship.

Security officials at the Memorial tournament occasionally interceded on Friday, approaching fans who appeared to jeer DeChambeau, although DeChambeau denied that the effort was made at his request.

“The officers take care of that,” DeChambeau said, adding that the security involvement was more about spectators yelling during his backswing.

Moreover, DeChambeau, who is one over par at the midpoint of the event and several strokes off the lead, smiled and insisted that being called “Brooks” was a compliment.

“They weren’t taunts at all, they were flattering,” he said and added: “When it comes down to it, when somebody’s that bothered by someone else, it is flattering.”

Spieth, whose second-round 67 left him one under for the tournament, said he was not distracted by the periodic tumult. But from the start of the Memorial, which was interrupted by thunderstorms on Thursday, Spieth walked a different path from the companions in his group. It included Patrick Cantlay, who shared the lead at eight under par with Jon Rahm when the second was suspended because of darkness.

On the opening hole the group played early Thursday afternoon, Spieth was treated with deference as he stood on the first tee. Hundreds of fans circling the area remained hushed until his name was announced, after which a thunderous cheer ensued.

DeChambeau’s approach to the tee moments later elicited something more akin to a carnival atmosphere, with an electrifying buzz and murmur as spectators stood on tip toes to catch a glimpse of the player whose prodigious drives and boasts of transforming golf have reinvigorated the game in the last year. 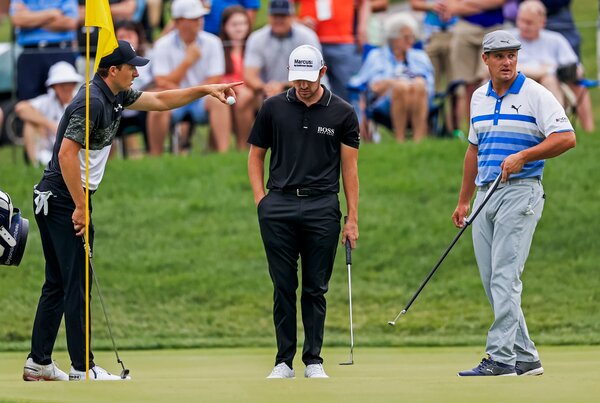 Men hoisted children onto their shoulders so they could see the strapping DeChambeau while others pointed cellphones to capture the moment when they stood so close to golf’s most intriguing, and occasionally mocked, personality.

Spieth, the slim, unimposing one-time boy wonder who claimed three major championship victories before he was 23, unleashed a syrupy swing that sent a proficient if understated drive down the middle of the fairway. The crowd, however, was not disappointed.

“Atta boy, Jordan,” a man in his 40s yelled. There were smiles and knowing nods all around.

Spieth, it seemed, was one of them.

When it was his turn, DeChambeau, the reigning United States Open champion, flexed and twitched over the ball and then unleashed a mighty swat that lifted his golf ball high into the sky until it bounded 50 yards past Spieth’s.

The crowd hooted and howled its approval.

DeChambeau, undoubtedly, is one of a kind.

DeChambeau stared straight ahead but appeared perturbed, something he denied after his round.

“Everybody thinks it’s a big deal; it’s not to me,” DeChambeau said evenly. Of Koepka, who has won four major championships, he said: “I’ve got nothing against him, I’ve got no issues at all. If he wants to play that game, that’s great. I think no matter what, he’s a great player and won a lot of tournaments, and it’s like somebody calling me Jack or Payne or Hogan. People think it bothers me, it really doesn’t.”

As play was concluding at the Memorial, a grinning Koepka playfully threw another barb in DeChambeau’s direction. After thanking fans for shouting his name Friday, he posted a video on Instagram and Twitter offering a case of beer to the first 50 people whose time at the tournament, as he said, “might have been cut short.”

The clamor around DeChambeau may have had no effect on his golf, but after shooting a one-under 71 in the first round, which included 15 holes played Friday morning, DeChambeau stumbled badly at the start of the second round Friday afternoon. With three putts from 28 feet, he double bogeyed the first hole, then took four shots to reach the par-4 third green, which led to a bogey. DeChambeau responded with an eagle and four birdies but also had three more bogeys for an inconsistent round of 72.

“A long day, long two days almost,” DeChambeau said. “Unfortunately, I got it going the wrong way out there for a while.”

Spieth’s experience was the inverse. After six bogeys in the final 13 holes of his first round, he spent most of a 40-minute layoff before the start of the second round eating lunch. (DeChambeau, by contrast, spent nearly the entire time hitting balls, mostly with a driver, on the practice range.)

Spieth began his second round with four steadying pars, then made five birdies without a bogey the rest of his afternoon.

“The biggest difference was I stopped hitting my tee shots in the rough,” Spieth said. “Pretty simple.”

In the end, not surprisingly, Spieth looked across the day and felt buoyed, even by the crowd reaction. He mentioned some “outliers,” but said: “We had massive support, people trekked 33 holes with us today, and that’s pretty awesome considering the wet conditions.”

Recalling his many wayward shots during the first round, Spieth laughed and said: “I mean, I know how I feel walking through the rough today.”