Virat Kohli's only gesture upon reaching his latest Test century, and one of his very finest, was to motion as if to say that his bat was doing the talking. It was ventriloquism, of course, Kohli talking through his bat. But what exactly did he say? Here's an edited transcript.

You may have had your doubts in Adelaide, but I did not. I'm still the best batsman in the world. Who else but me could play this innings? Who could merely by blocking the ball make it whistle through cover point for four like that? 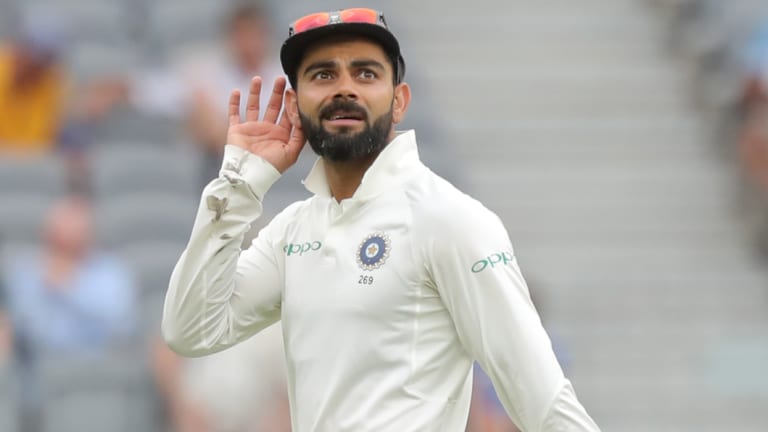 All ears: Virat Kohli gestures to the Perth crowd on day three of the second Test.Credit:AAP

Who could smear Nathan Lyon through covers the way I did, with a drive that if Roger Federer hit it would be called an off forehand with top-spin? Sorry for the tennis analogy, but even the cricket press are running out of superlatives for my batting.

I'm not saying it was easy for me and my bat, not at all. Did you see what the score was when I came in? 2/8 as it happens. Do know what is at stake here? Our last frontier, that's what.

Have you watched that Aussie attack in action? I won't ever admit this until our careers are all over, but they rock. Pat Cummins gave me as good a work-over as I've had on fourth stump. They say I have a chink there, but which batsman ever did not? Viv Richard? OK, I'll grant you him.

Yep, I had luck. No-one ever made a Test century without it. But did you see where my feet were, my head, my trusty bat? I made that luck. 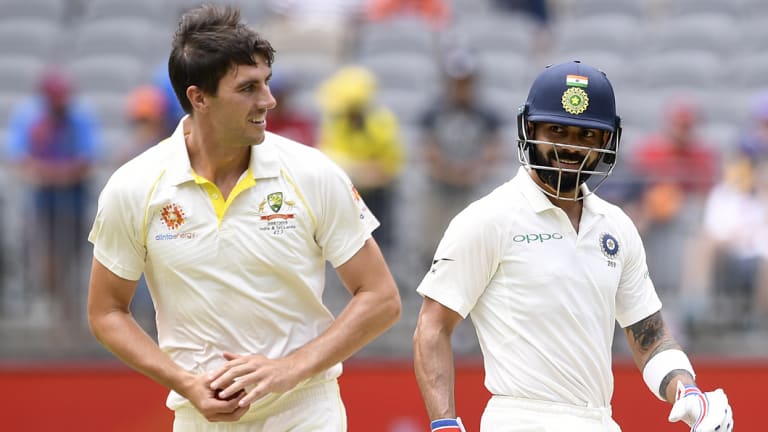 Yep, I had to work. Oh, I worked. Against Cummins, I was going at a strike rate of 30. This was a Test match. I had all day. If you were bored, you were at the wrong match. Maybe that's where the Australian fans were?

This pitch wasn't exactly Chennai, remember. Did you see way the ball flew off it, the way one ball from Cummins went for four byes on the first bounce, or how I merely had to tip another from Josh Hazlewood to send it over third man for six? Did you see our quicks later in the day, whistling it around the Australians' ears and sometimes into them (might have been a few thoughts from me ringing in those ears as well)

Did you see just how damned dangerous batting was for everyone?

Did you see that ones that jagged back and hit me in the thigh, or popped up and crushed my gloves? I could show you the bumps and the bruises, if you like. Thank goodness for physio Pat Farhart and his tablets and his sprays and his bandages. I started to think of him as my cornerman.

You might have noticed that moment when Pat was taping me up at the same time I was taping up my bat. That's how it works: he keeps me together, I keep the bat together, we keep India together. That's me and my bat: we're made for each other. 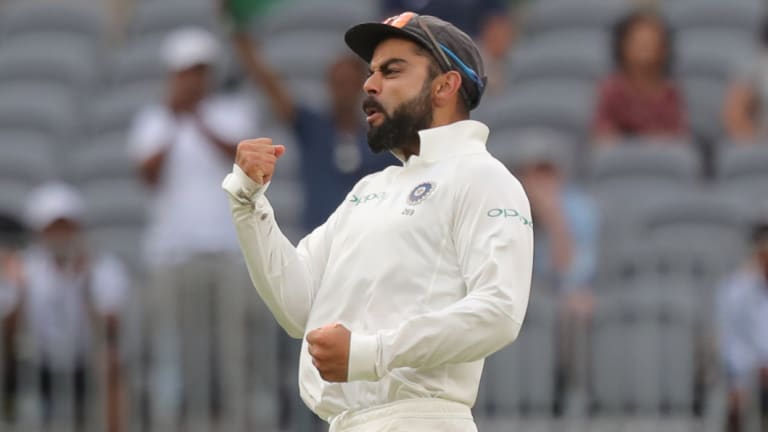 Rolling with the punches: Virat Kohli led the Indian fightback.Credit:AAP

Did you see how the bowling sometimes stung me, but also stimulated me? Let's not kid ourselves: Test cricket against the Aussies is hand-to-hand combat. We're biting our to tongues this time, but we're not pulling our punches. Ask Aaron Finch, Marcus Harris, or the Aussie team doctor. Actually, we're we've still got a bit to say, too.

Of course you saw all this. You were watching. Everyone was, all over the world. It's been that way for a few years now. I bet if you looked on the internet – I'm not allowed – you'd read felicitations from California and Norway and Qatar. I bet if you looked at the ratings in India, you'd be astonished.

Do I mind? Have a look at at my record. Have a look at my average since I became captain. It's 65. You'd struggle to do that on a computer. If you're captain of India, you can't afford to be overawed. You have to do the awing. You have to act as if you're born to rule, your success divinely ordained. It's not, of course. There are no bequests in Test cricket.

At 100, the scoreboard said it all. That's to say, a milestone for me, but nowheresville still for India. I didn't celebrate because there was nothing to celebrate. I can get another hundred next week, but we can only win this Test match now or never.

That should have been the last word. As it happens, it was Peter Handscomb's word the umpires took. Catch, no catch? Somehow, we and Australia can't avoid flashpoints like this. The only thing I'll say is that you'll hear more from me about it, and it won't be through my bat medium.

As for the match, by the last session, it was was as martial as cricket gets. We hurt them. But we'll be back in the firing line soon enough. You might be able to hear my bat clearing its throat. Let's just say you haven't heard the last of it yet.