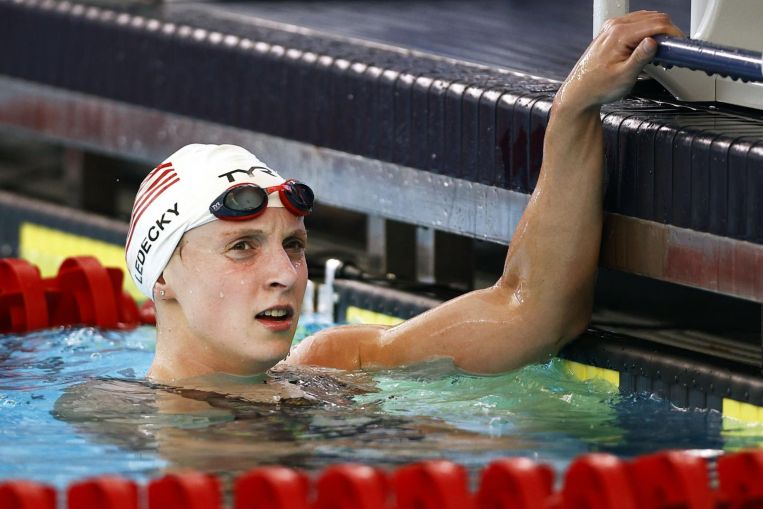 LOS ANGELES (AFP) – Katie Ledecky picked up where she left off in her first competition in a year, winning the 1,500m freestyle on Wednesday (March 3) in the Pro Swim Series in San Antonio, Texas.

The five-time Olympic gold medallist who is gearing up for the pandemic-delayed Tokyo Olympics, cruised to victory in 15min 42.92sec, with Ashley Twichell – already qualified to swim the 10km open water event in Tokyo – a distant second in 16:04.29. Erica Sullivan was third in 16:07.66.

“It feels good,” Ledecky said post-race via a Zoom call.

The long-distance press conference was part of the coronavirus safety protocols in place for the meet, which also include mask-wearing on deck before and after races.

“It’s good to see everyone and be in this environment and get the opportunity to race,” she added.

Ledecky, who owns the world record of 15:20.48, is the overwhelming favourite to capture the first women’s 1,500m free Olympic gold ever awarded when the event is added to the women’s swimming programme in Tokyo.

But she admitted that with Covid-19 still casting a shadow, there are still plenty of “to be decideds” as she makes her final preparations.

That includes whether she will race the 1,500m again before the US Olympic swimming trials in June, and even just what events she will swim in the meet that runs through Saturday.

“We have a plan, but it always changes,” said Ledecky, who said she had not set a specific goal for the 1,500m on Wednesday. “I didn’t set too many expectations going into this first race and kind of knew getting the first race out of the way would be a milestone in this journey back to real racing, so I’m looking forward to the rest of the week.”

The San Antonio meet also includes Caeleb Dressel, the 13-time world champion who could mount a challenge to equal Michael Phelps’ record of eight golds at one Games in Tokyo.

Emma Corrin’s Net Worth: The Crown Star Makes Less Than You Think