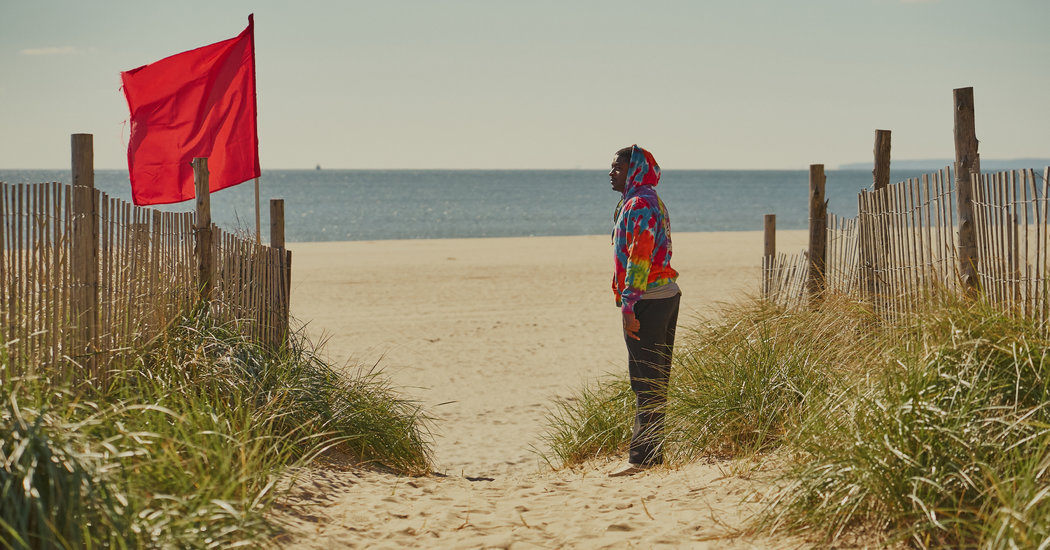 Surfing Remade in the Rockaways

Three years after Hurricane Sandy lashed the Rockaways, the boardwalk marched down the beach in broken segments as the public housing built under Robert Moses was hemmed in by condos. Out in the surf, not much changed as the bathymetry returned to normal, but the predominantly white, male crowd of surfers had.

Part of that shift happened when Louis Harris, 46, founded the East Coast chapter of the Black Surfing Association in 2016.

Mr. Harris bought his first surf board after moving to the Rockaways in 2006. After getting his bearings in remote beaches, he joined the crowd at Beach 90th Street. “That’s when I saw B.J.,” Mr. Harris said.

Brian James — “B.J.” — the only other black man in the water, paddled over to Mr. Harris and asked if he wanted to hang out afterward. “‘If you’re going to be a surfer, you have to take it seriously,’” Mr. Harris recalled him saying. “‘You’re a black guy. Everybody’s eyes are on you.’”

From then on, Mr. James taught him how to navigate the world of surfing. Mr. Harris later offered free surf lessons to any children who would show up, many from the neighborhood where more than 66 percent of its population identify as nonwhite, according to the office of the New York State Comptroller, and the median income is the second lowest in Queens. He built a community around the idea that children in the Rockaways should be engaged — and that surfing alongside skate lessons, cooking workshops, and snowboard trips was an inextricable part of that.

Surfers like Mr. Harris are carving out a space for themselves in the Rockaways, and are challenging the notion that surfing belongs to white men.

In 2014, 14-year old Marcell Dockery set a mattress on fire in his Coney Island apartment building. The blaze killed one responding officer, critically injuring another. When asked why, Dockery cited boredom. The response haunted Mr. Harris. That same year, Mr. Harris read about Tony Corley in The Surfer’s Journal, who founded the Black Surfing Association in 1975 in California. Corley’s departure point was assembling some sense of belonging as he felt like the sole black surfer in central California.

And then in 2015, Corley’s story coupled with Dockery’s moved Mr. Harris to the point where he proposed creating an East Coast Chapter. Mr. Corley agreed. Unquestionably, that good will began for Harris with B.J.’s mentorship.

In his memoir, “The Nautical Negro,” Mr. James detailed his experience in Rockaway 20 years ago. “The complexion of the lineup was beginning to change, and some people didn’t like it,” he wrote. “Being one of the first black surfers to crack the lineup in a place like Rockaway was no picnic.”

After all, modern surfing took shape in Hawaii. The sport’s forefather, the Olympic athlete Duke Kahanamoku, visited Far Rockaway in 1912 for one of the first surfing demonstrations in America.

The values of the surfing that Kahanamoku celebrated spoke to inclusivity and Aloha, meaning an ethos of compassion, but the opposite has often held true along the coasts.

“Surfing was shaped and molded in his image,” said Matt Warshaw, 58, the author of “The History of Surfing.” “He wanted to share the thing he loved with the rest of the world.”

But as surfing spread after World War II, the magnetic center jumped from Waikiki to Malibu. The concentration of wealth along America’s coast afforded those with affluence access, and in turn, surfing grew whiter.

“It goes from being Duke, Hawaiian and dark to young, white and suburban,” Mr. Warshaw said. With that, the sport took on a whole new spirit.

“I wince at a lot of what surfing has stood for and not stood for,” Mr. Warshaw said. “Surfing has a terrible history with regard to gender and sexism.” But, he believed it was class rather than race that haunted the history of surfing.

Allison Marsiello, 35, who moved to the Rockaways three years ago, felt that while the scene was changing, it still had the traces of surfing’s darker side. Women had to work doubly hard to claim their place in the water, where men often cut them off, paddle around them or even catcall them, she said.

When Benita Hussain, 39, first surfed Rockaway Beach in 2010, it felt like a different world. There were almost no restaurants along the worn wooden boardwalk, and the water was empty. “It felt a lot more wild,” she said. It became her go-to spot after studying with Dion Mattison, a surf coach who founded the Conatus Surf Club in 2013. 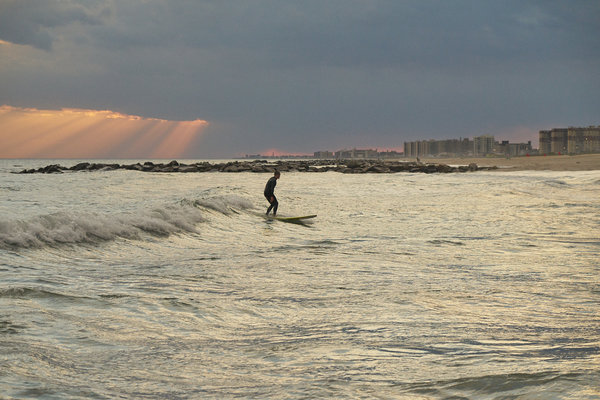 After Sandy, things looked different out in the water. “There’s more and more women,” Ms. Hussain said. But when she looks around, she feels as if she is the only brown one. “That, to me,” she said, “I’ve felt no matter where I surf in New York. It’s not something I carry with me when I’m surfing, but when I’m getting out of the water, I remember the fact that I’m different.”

The boardwalk’s slow but steady makeover has rendered the place almost unrecognizable. Although gentrification in the Rockaways began before Sandy, the exodus of nearly 16 percent of the population after the storm created immense change throughout the peninsula.

“It felt like you’d picked up Williamsburg and put it on the beach,” Ms. Hussain said. “It was young, hip and generally white people, and I was always uncomfortable with that.”

Ms. Hussain acknowledged that she is one of the surfers in Rockaway who come in to surf and head home shortly after. Local residents know them as those that are “down for the day.” As for the atmosphere in the water, Ms. Hussain said, she knows there are people who are unhappy she is there.

Selema Masekela, 47, a sports commentator and journalist who grew up variously in New York, Southern California and South Africa while his father, an activist, was in political exile during apartheid, has grappled with the racial issues that haunt the history of surfing. He calls it the “quiet results of segregation.”

“The outdoors in general were one of the last bastions for segregation to continue to exist,” said Mr. Masekela, who is black. “Culturally, there’s been this idea that the ocean is just not for us. Where did that come from?”

In the Jim Crow era, people of color had limited access to the coasts. Later, urban planners like Robert Moses prevented public transportation to public beaches. Today, many coasts can remain inaccessible for monetary reasons. For example, it costs $400 for a nonresident permit to park at the beaches of East Hampton during the summer.

Mr. Masekela hoped those barriers would be erased in time, because the ocean altered the arc of his life. During his first surf, “something poured into me,” he said. But his memories weren’t all positive. People lobbed epithets at him and told him he didn’t belong.

“It was such a dehumanizing experience,” Mr. Masekela said. “You learn how to almost smile through it, but it’s a constant battering.”

In the last few years, though, he’s seen promise. Mikey February, a black surfer from South Africa, became the first to join the World Tour of Surfing. “It was magic,” Mr. Masekela said. “It was a powerful thing for me.”

Mr. Warshaw, the author, echoed the sentiment. As the World Tour of Surfing reaches its final leg this year, the governing body of the tour vowed to pay female athletes the same amount as men in 2019.

As to how that change translates locally in the Rockaways, “People have to look across the street at those buildings and think to themselves: ‘I want to be a part of sharing this,’” Mr. Masekela said.

For him, it began outside Boarders Surf Shop when he started talking to Johnny Knapp, a surfer who lives in Brooklyn, about the surf boards strapped to his car. Mr. Knapp, 33, promised Mr. Godette that if he got a wet suit, he’d loan him a board. Mr. Godette made good on the offer, and soon after, the two were in the water together. Afterward, Mr. Knapp gave him the board.

“That was it,” Mr. Godette said. Skating had long claimed his heart, but now it belonged to surfing.

“It changes your whole perspective,” he explained. He said he got his passport this summer and was planning a trip to Central America to surf for the first time outside of New York.

When I asked if he felt like the only black guy in the water at Rockaway, he told me no.

“Because usually, I’m not.”

An earlier version of a picture caption associated with this article misstated the year that Louis Harris founded the East Coast chapter of the Black Surfing Association. It was 2016, not 2015.

‘Whatever it takes’ Trump vows to let shutdown continue