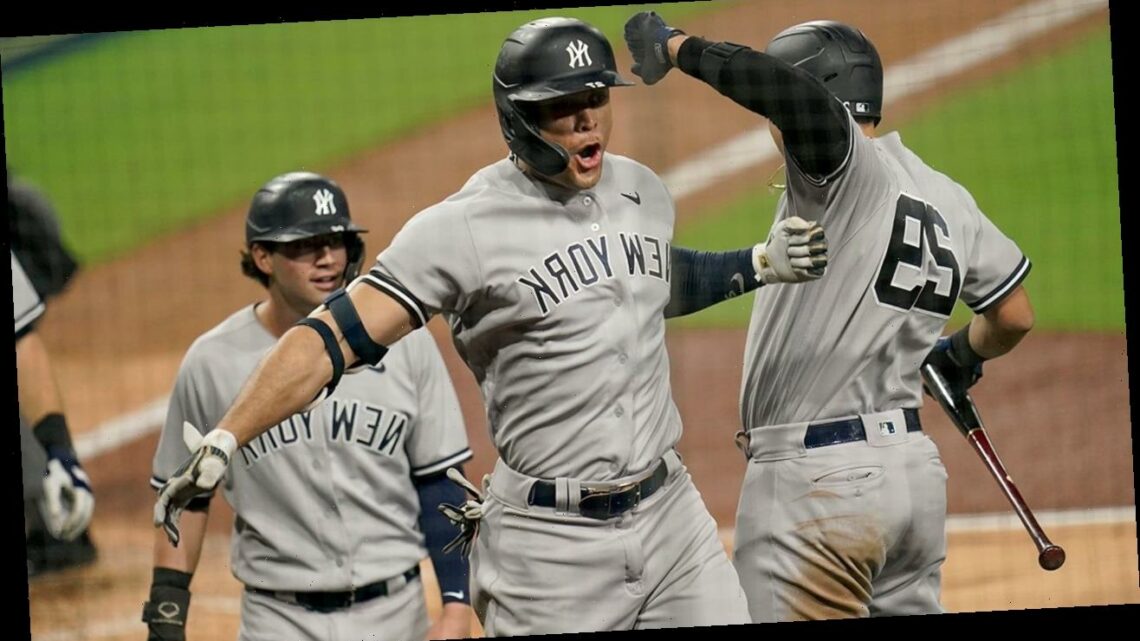 Stanton, Yankees power way to 9-3 win against Rays in opener 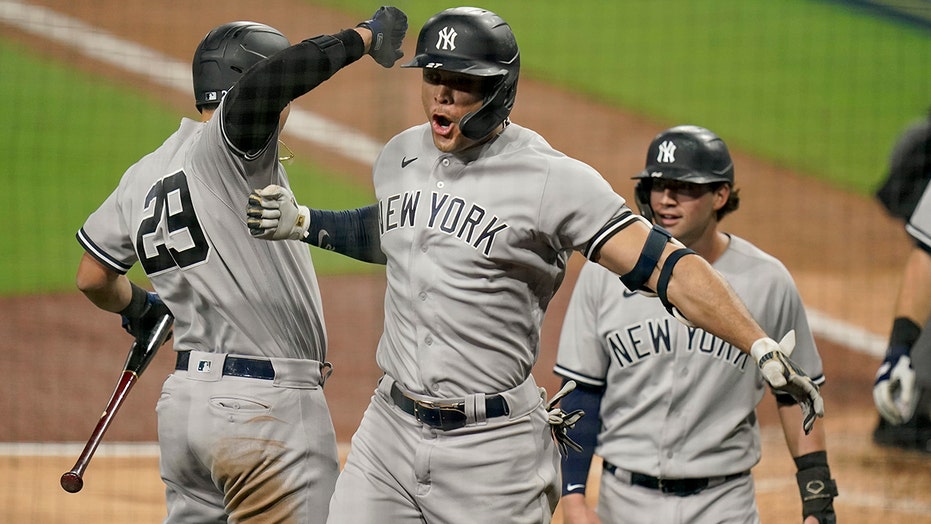 Giancarlo Stanton hit a grand slam in the ninth inning for New York's fourth home run of the game, and the Yankees beat the Tampa Bay Rays 9-3 Monday night in the opener of their AL Division Series at Petco Park.

Stanton homered to straightaway center field on a 2-2 pitch from John Curtiss with one out. The slugger took several steps with his bat still in his hands as he watched the ball sail through the warm San Diego night before beginning his trot.

A few fans chanted “Let's Go Yankees!" from a balcony on an office building just beyond right field of the mostly empty ballpark.

Kyle Higashioka and Aaron Judge hit the tying and go-ahead home runs off Blake Snell in the fifth inning. Clint Frazier hit an impressive shot into the second deck in left in the third.

The Bronx Bombers became the first team in American League history to hit a grand slam in back-to-back playoff games. Gio Urshela did it in Game 2 of the first-round sweep of Cleveland. Two NL teams have done it, the 1977 Dodgers and 2011 Diamondbacks.

The Yankees set a franchise record by hitting at least three home runs in three straight postseason games. They are the second team to do in baseball history after the Rays did it in four straight in 2008.

New York has hit 11 homers in those three games. They are the most for any team in the first three games of a postseason.

The ball was flying for the Rays as well off Yankees ace Gerrit Cole in downtown San Diego. Randy Arozarena homered with two outs in the first and Ji-Man Choi muscled an opposite-field, two-run shot with no outs in the fourth into the Rays bullpen beyond the fence in left-center to give Tampa Bay a 3-2 lead.

Teams that have outhomered the opposition are 13-0 this postseason.

Coincidentally, Yankees third base coach Phil Nevin was a slugger for the Padres when Petco Park opened in 2004 with vast outfield dimensions. He and Ryan Klesko groused about how they’d crush a ball that would be a homer in other parks, only to watch it go for a long out. Nevin once hit a double that he thought should have been a homer. After reaching second, he gestured angrily toward general manager Kevin Towers’ box. The two later had words in the clubhouse.

The fences were moved in prior to the 2013 season.

Cole got the win by going six innings, allowing three runs and six hits while striking out eight and walking two. He was pitching about 100 miles south of where he grew up in Newport Beach before playing at UCLA. Cole beat Tampa Bay twice in last year’s ALDS while with Houston.

Snell, the 2018 AL Cy Young Award winner, was the loser. He went five innings and allowed four runs on six hits while striking out four and walking two.

New York's Aaron Hicks, who's from San Pedro in the Los Angeles area, hit a sacrifice fly in the first and an RBI single in the ninth.

Arozarena tied it in the bottom of the frame before Frazier gave the Yankees the lead in the second. Choi’s shot with no outs in the fourth gave Tampa Bay a 3-2 lead.

Higashioka, who’s from Huntington Beach in Orange County, hit a line shot into the seats in left off the fifth. Judge, who’s from northern California, lined his shot in the left-field seats as well.

The teams are meeting in the postseason after Tampa Bay dominated the contentious regular-season series 8-2.

Rays: Added All-Star OF Austin Meadows to the roster but he wasn’t in the starting lineup. He had been out since Sept. 18 with a left oblique strain. Meadows struck out as a pinch-hitter in the seventh.

Yankees: Rookie RHP Deivi García (3-2, 4.98 ERA) is scheduled to start Game 2 on Tuesday night. At 21 years, 140 days, he will become the youngest Yankees pitcher to make a postseason start. Masahiro Tanaka was pushed back to Game 3.

Rays: RHP Tyler Glasnow (1-0 3.00 ERA postseason) will go for his second playoff victory after beating the Blue Jays 8-2 to complete a two-game sweep in the first round.