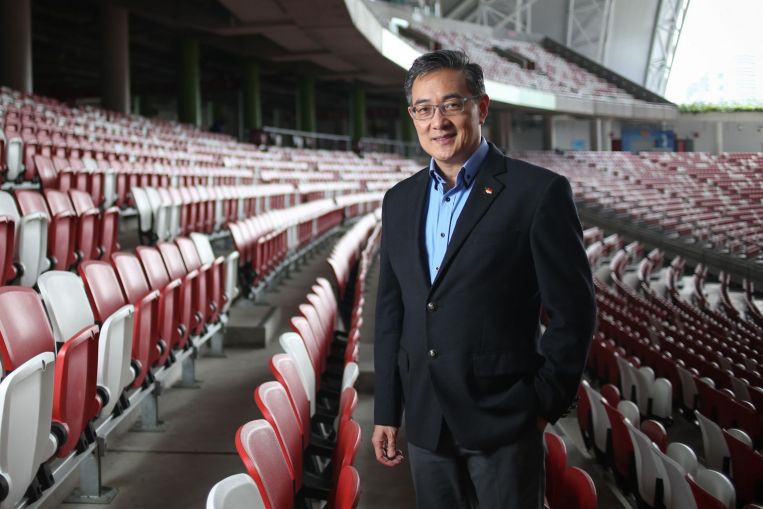 SINGAPORE – The Singapore Sports Hub is searching for its fourth chief executive officer (CEO) in just over three years following the sudden resignation of Oon Jin Teik on Monday (Jan 28).

The 55-year-old former national swimmer’s departure was announced in a press statement at 9.58pm last night and comes just over a year after he was appointed to the job. He will relinquish the reins after the April 13-14 HSBC Singapore Rugby Sevens.

Bryn Jones, the Hub’s chairman, will take over as acting CEO until its “global search” for a replacement bears fruit.

“The board extends its heartfelt appreciation to Jin Teik for his strong leadership, passion and unwavering commitment to the project and wishes him the very best in his future endeavours,” Jones said in the statement.

No reason was given for Oon’s sudden resignation and he could not be reached for further comment but The Straits Times understands that there was a disagreement between him and the board on the direction of the Sports Hub.

In the same statement, he said: “I have been privileged to be involved with the Singapore Sports Hub for almost 20 years (since its conceptualisation phase)… They have given me full support throughout my tenure and together with Sports Hub’s internal and external partners, we have accomplished a lot.

“I am very proud of this national icon, the Singapore Sports Hub, and I wish the staff, board and management team the very best for the future.”

The announcement sent shockwaves throughout the local sports fraternity as Oon had attended a Chinese New Year luncheon hosted by the Sports Hub at the National Stadium just last Saturday. Eight weeks ago, he had also helmed a presentation of the Hub’s plans for the year to local media.

In a statement, national sports agency Sport Singapore (SportSG) voiced its concern “over the resignation of the CEO, and the impact that this would have on Singapore Sports Hub’s operations”.

“Sport Singapore has sought clarification from the chairman of Singapore Sports Hub on their plans to address this and have emphasised that we will continue to hold them accountable for the delivery of a first-class and vibrant sports, entertainment and lifestyle hub for Singaporeans,” added the statement.

Koh Ching Ching, head of group brand and communications at OCBC, a key stakeholder at the Hub where it holds the naming rights to several facilities such as the OCBC Aquatic Centre and OCBC Arena, added: “We are surprised by Jin Teik’s departure. Since Jin Teik took the helm at the Singapore Sports Hub, the partnership between us has strengthened with mutual respect and understanding.

“Activities at the Singapore Sports Hub have also increased significantly. We see stronger community engagement and buzz, which is something OCBC desires. We will miss working with Jin Teik and wish him all the very best.”

He joined the Sports Hub in May 2014 as the chief operating officer, and was the acting CEO after Manu Sawhney quit abruptly in May 2017.

In January last year, he was the first local-born to be named CEO of the $1.33 billion facility.

Then, he had promised to engage all Singaporeans, saying: “Our goal is to give everybody in the heartland something new to experience in the Sports Hub through a diverse portfolio of programming.”

He has also been involved in its joint bid with SportSG and the Singapore Tourism Board to host the season-ending ATP Finals from 2021. Singapore is one of the five shortlisted cities vying to host the prestigious year-ender in men’s tennis.

Last February, the Sports Hub also signed a three-year Memorandum of Understanding with the Football Association of Singapore (FAS) to make the National Stadium the “Home of the Lions”.

FAS general secretary Yazeen Buhari also paid tribute to Oon, saying: “Jin Teik had always shared our common vision when it comes to football programming at the Hub. He understands the needs of the game here in Singapore and the key role the Hub plays as a strategic partner of the FAS.

“The FAS and I wish him all the best in his future endeavours and we hope to still see him involved in sports in one way or another.”

This is not the first time the Hub, which began operations in 2014, has been shaken by the departure of a senior office holder. ST understands that its COO Wong Lup Wai and chief financial officer Sandy Tay had also resigned recently.

During Sawhney’s tenure, it was also hit by a spate of resignations of senior management and staff.

In response to ST’s queries, a Sports Hub spokesman would only say that “in the normal course of business for all organisations… a certain level of attrition is to be expected”.

It added in a statement: “Our focus is to ensure business continues as usual at the Singapore Sports Hub. We have a strong team in place and we remain fully focused on pursuing operational excellence, executing a vibrant repertoire of events, and delivering great experiences for our clients, colleagues, partners and patrons.”

Couple responds to backlash for crowdfunding their wedding: 'We're not money grabbing people'