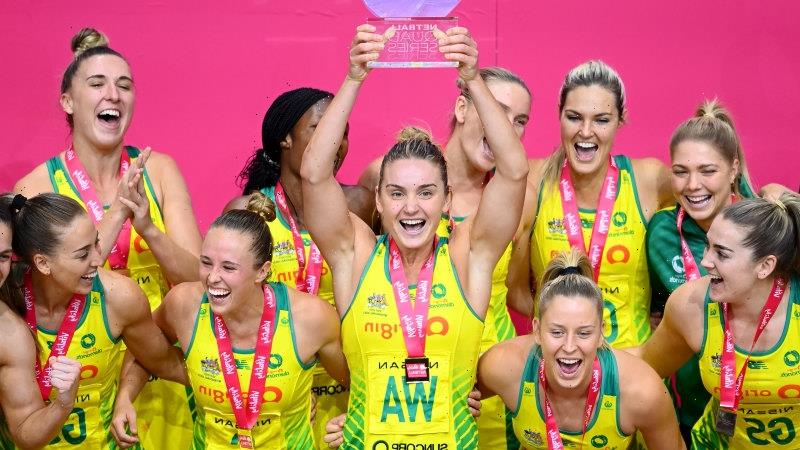 Coach Stacey Marinkovich says Australia’s Quad Series win is an encouraging sign for the Commonwealth Games later this year, after the Diamonds defeated England in the decider 58-46 on Thursday morning.

The Diamonds won a ticket to the final with strong victories over New Zealand and South Africa earlier in the week in the Series, but the Australian team wavered in their last regular game against England on Wednesday, blowing a six-point lead to finish the game 48-48.

The draw set the stage for a thrilling decider and the tight tussle continued deep into the final, with just one point separating the rivals heading into the last quarter of the Series’ final.

But the Diamonds managed to find a late surge at London’s Copper Box Arena to take out the final quarter 18-5, and the joyous Aussies secured the title.

The win could prove the lift the Diamonds needed to put the heartbreaking losses of the 2018 Commonwealth Games and the 2019 World Cup behind them.

Marinkovich said the preparation put in by the players both on and off the court in the lead up to the Quad Series had played a major factor in the result.

“You’ve got to have all things progressing; you can’t just get on-court and expect things to happen. When you see that, it’s exciting what this group can be capable of.” 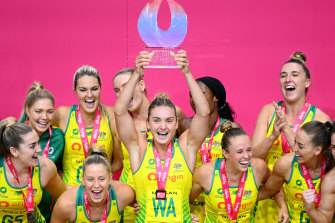 The win against the England Roses is particularly sweet from the Diamonds leading into this year’s Commonwealth Games as Australia looks to claim back the gold from their rivals.

With the Quad Series the final international preparation ahead of the Commonwealth Games in July, the Diamonds now head in as gold medal favourites.

Shooting superstar Gretel Bueta, who was named player of the series, said the tournament in London had proved “huge” for the side.

“I think it’s a huge confidence boost for us,” she said post-match.

“Obviously when you step out on-court you want to win and put your best foot forward. But, we knew what we wanted to get out of the series and Stacey was really clear with us in our game plan in attack and defence.”

The Roses led the entire match after coming out firing from the starting buzzer, putting the Diamonds on notice with a 14-12 lead after the final quarter.

England continued to lead at half-time 27-25 before the Diamonds pushed the margin to just one point to head into the final quarter 41-40.

Australia managed to dominate the final term to take away the series with England left stunned by the fire from the Diamonds in the final 15 minutes of the match.

Bueta said the atmosphere in the dressing room post-match was electric.

“There was a lot of excitement, we sang our [team] song we usually sing it loud and proud after a win and we got three goes out of it tonight,” she said.

“The girls are very excited.”

Bueta missed just one shot out of the 42 made on Thursday morning while goal attack Steph Wood also stunned with a 17 from 18 shooting accuracy rate.

Captain Liz Watson dominated with 21 goal assists and 37 feeds, while Sarah Klau managed an intercept, a rebound, and seven deflections.