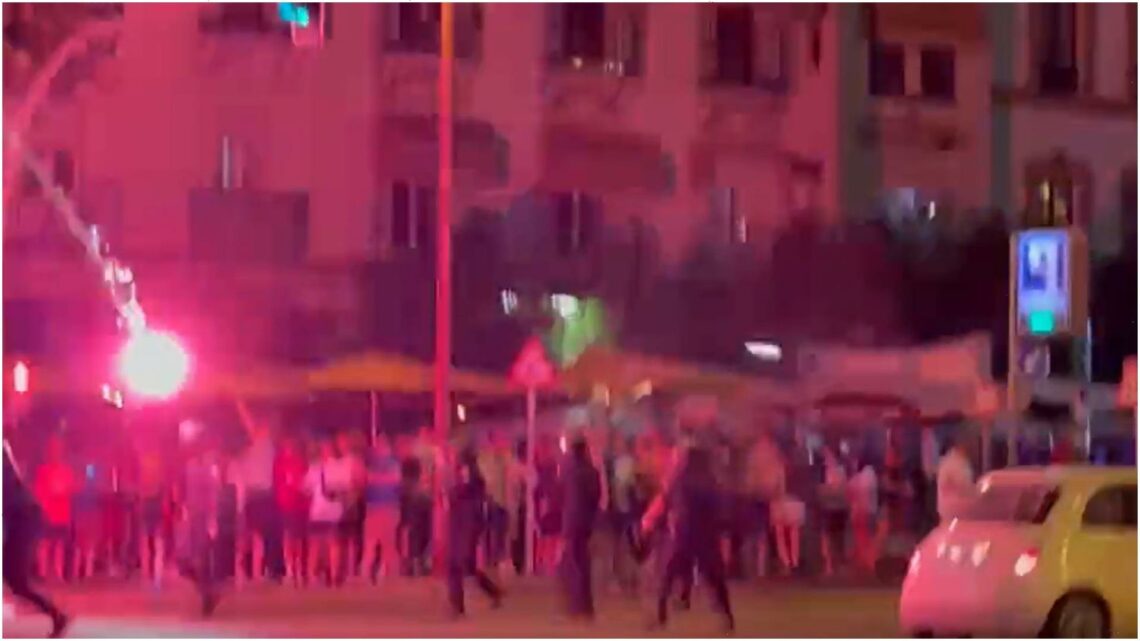 SPANISH police have confirmed the arrests of five Germans after halting an attempt by Eintracht Frankfurt hooligans to attack Rangers fans.

Riot cops had to intervene after the Germans, many of them wearing balaclavas to mask their faces, began throwing flares at a large group of Gers supporters enjoying late-night drinks in Seville. 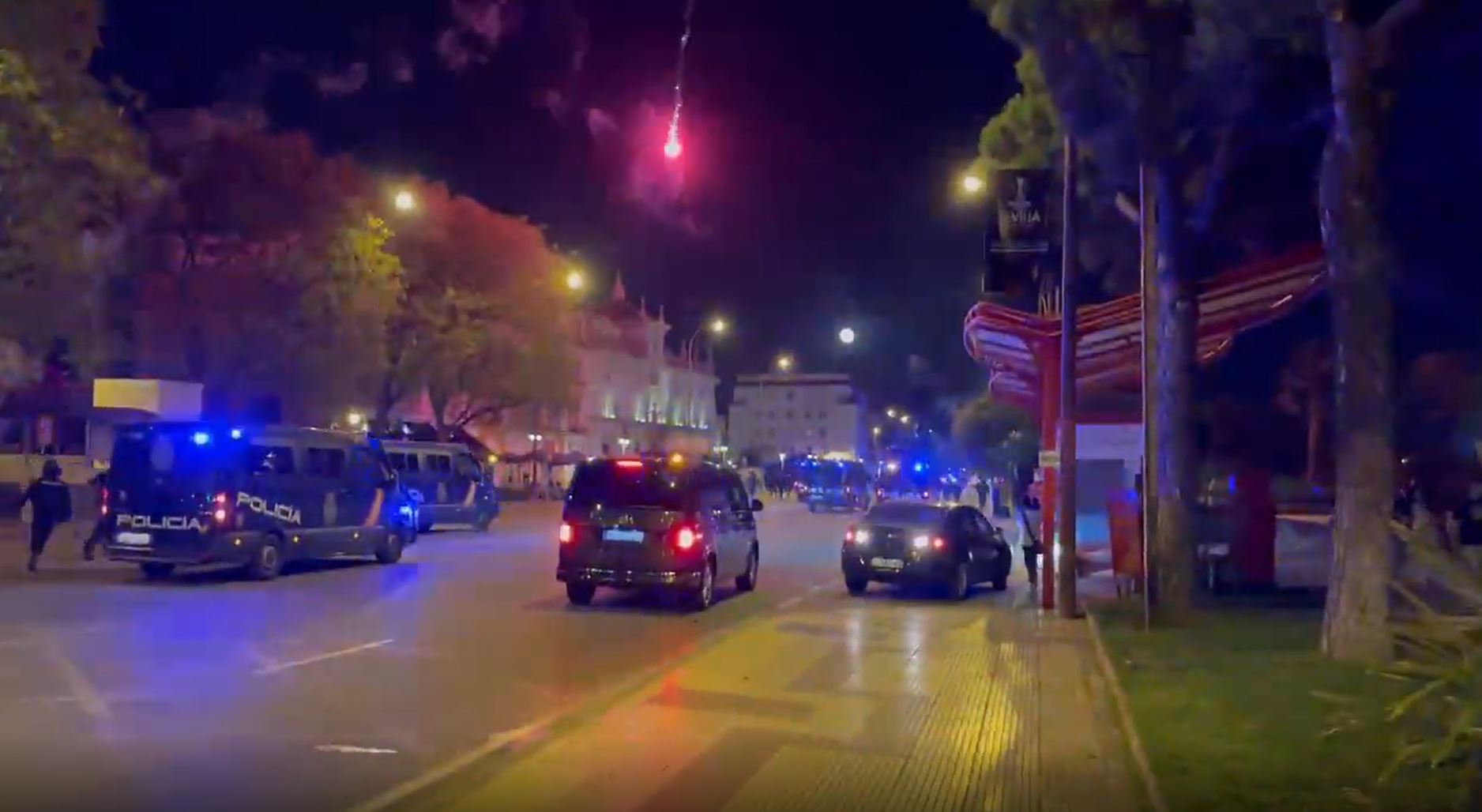 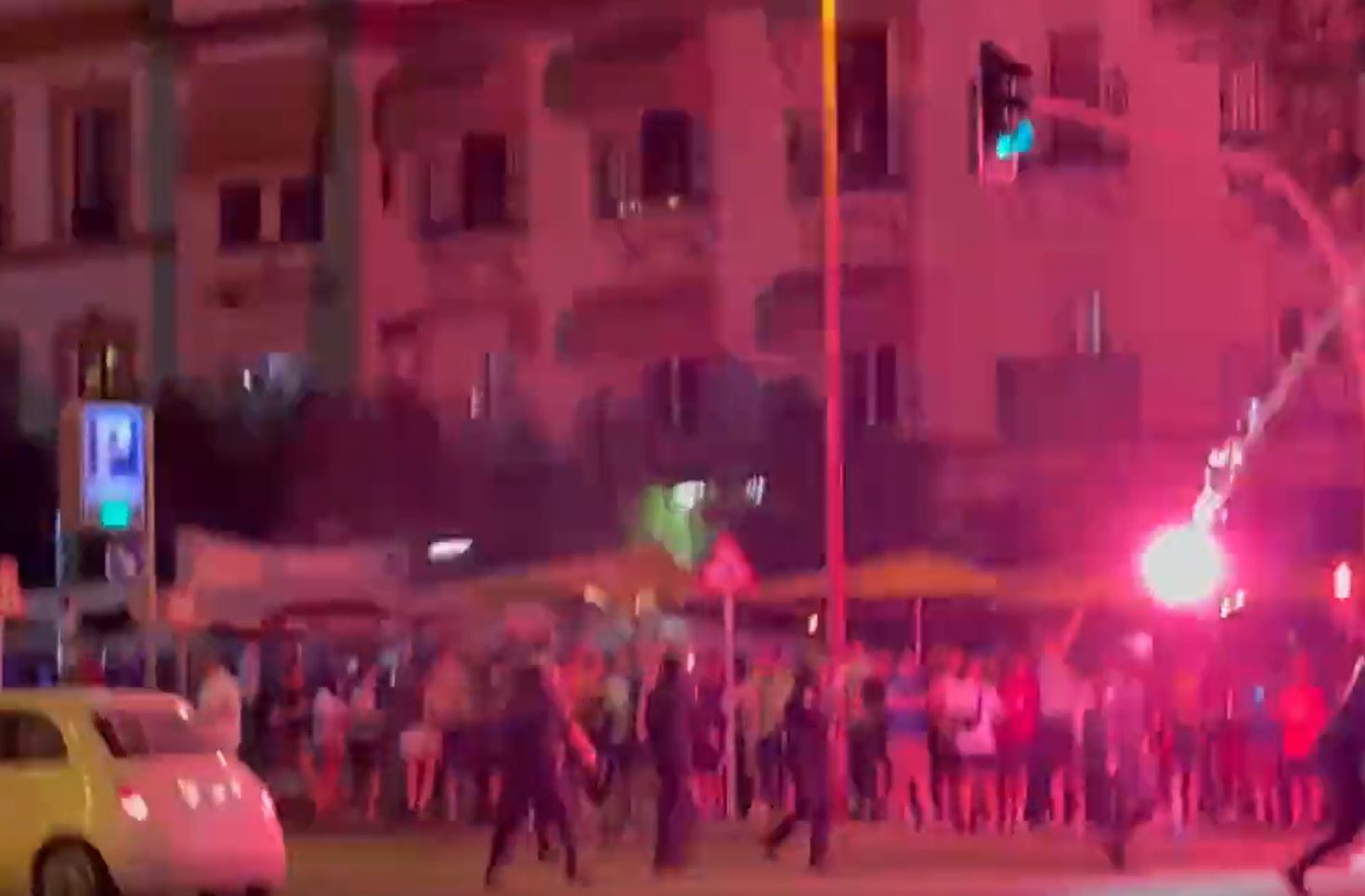 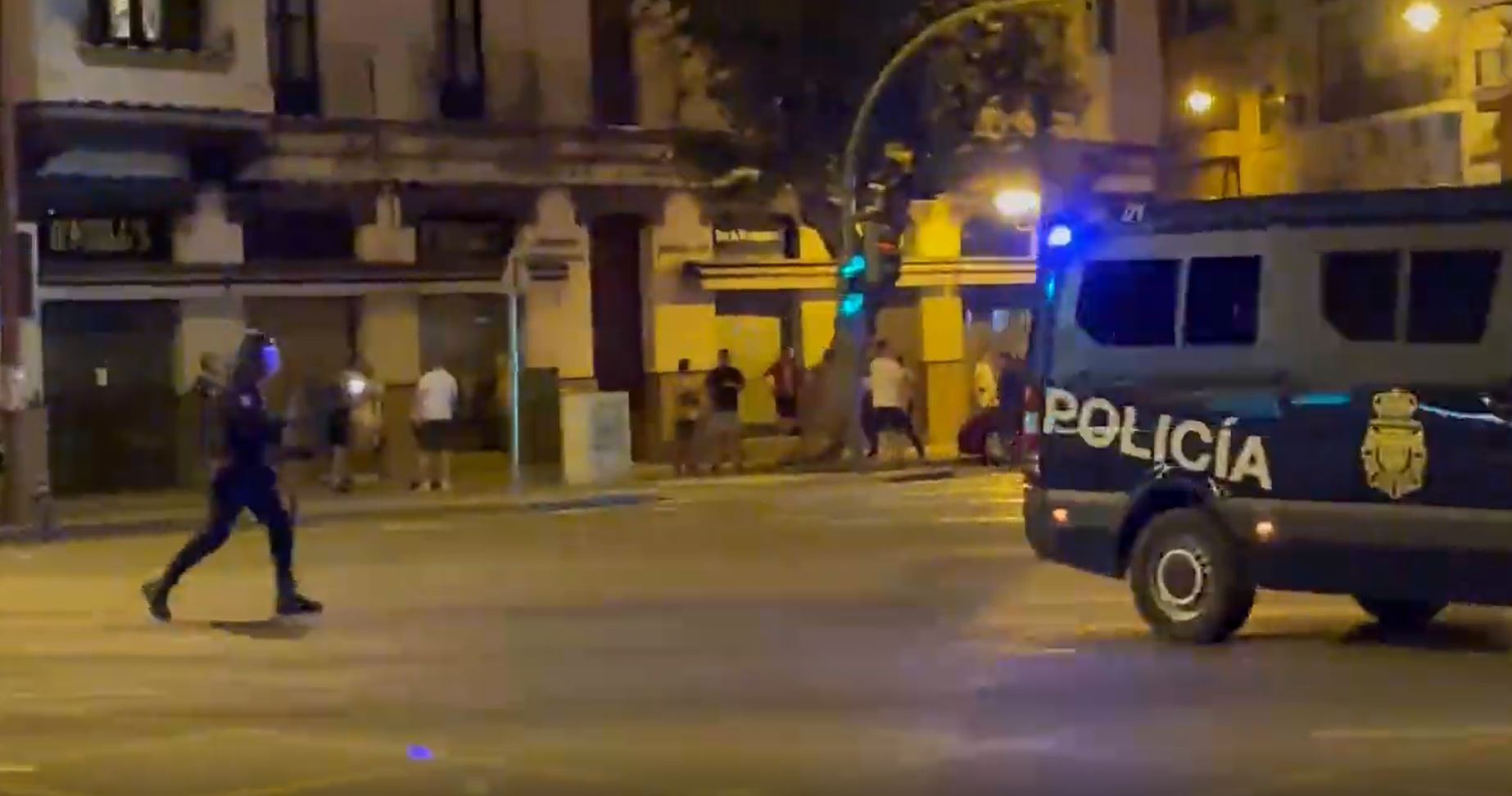 Spanish TV footage showed the hooligans brazenly approaching heavily-armed officers standing between them and the Scottish fans before hurling their missiles as extra police reached the scene.

One flare landed inches from the spot where the Rangers supporters were standing, near to Irish bar O’Neills on Paseo de Colon where trouble flared between Eintracht Frankfurt ultras and West Ham fans in March.

One Gers supporter could be seen picking up a glass and throwing it in the direction of the German hooligans on the other side of the police line.

But police sources said the Eintracht Frankfurt ultras had started the trouble by trying to reach the Rangers fans and start a fight with them.

Police reinforcements were quickly mobilised, arriving in several riot vans with their sirens sounding and lights flashing, to restore order and stop the problems worsening.

One pot-bellied German was seen being marched away by cops in handcuffs.

A spokesman for Spain’s National Police, in an early appraisal of last night’s violence, said: “Five people, all German nationals, have been arrested.”

Spanish police chiefs admitted yesterday the Europa Cup final represents the “most complicated” challenge they have faced in recent years.

More than 5,500 police and private security guards have been mobilised to help keep the peace.

Spanish National Police chief Juan Carlos Castro admitted the effect of alcohol on the behaviour of both sets of fans was a concern.

He also confessed the amount of construction work going on in the city, including areas near to the Ramon Sanchez Pizjuan Stadium where tonight’s final will be played at 9pm, was a worry.

Cops confirmed the five arrests they had made were for public order offences and said the attack with flares by Eintracht Frankfurt ultras followed clashes moments earlier by Seville Cathedral.

They also said the problems had been started by around 200 Eintracht Frankfurt supporters and confirmed they had to fire warning shots into the air to bring the situation under control.

A Rangers supporter suffered head injuries, but his condition this morning was not known.

A spokesman for Spain’s National Police said: “The National Police have arrested five Eintracht Frankfurt supporters for public order offences following the violence overnight in the centre of Seville.

“The problems occurred around midnight during a mass altercation opposite Seville Cathedral.

“Rapid police response units who were in San Francisco Square had to intervene to deal with an incident sparked by a group of 200 Eintracht Frankfurt fans who were attacking Rangers supporters.

“When they saw police arrive, the German fans started to flee in the direction of Paseo Colon, assaulting Rangers supporters as they ran and clashing with police trying to stop the attack on the Rangers fans.

“At that moment the Eintracht Frankfurt fans began to throw glasses, flares and tables at police officers. 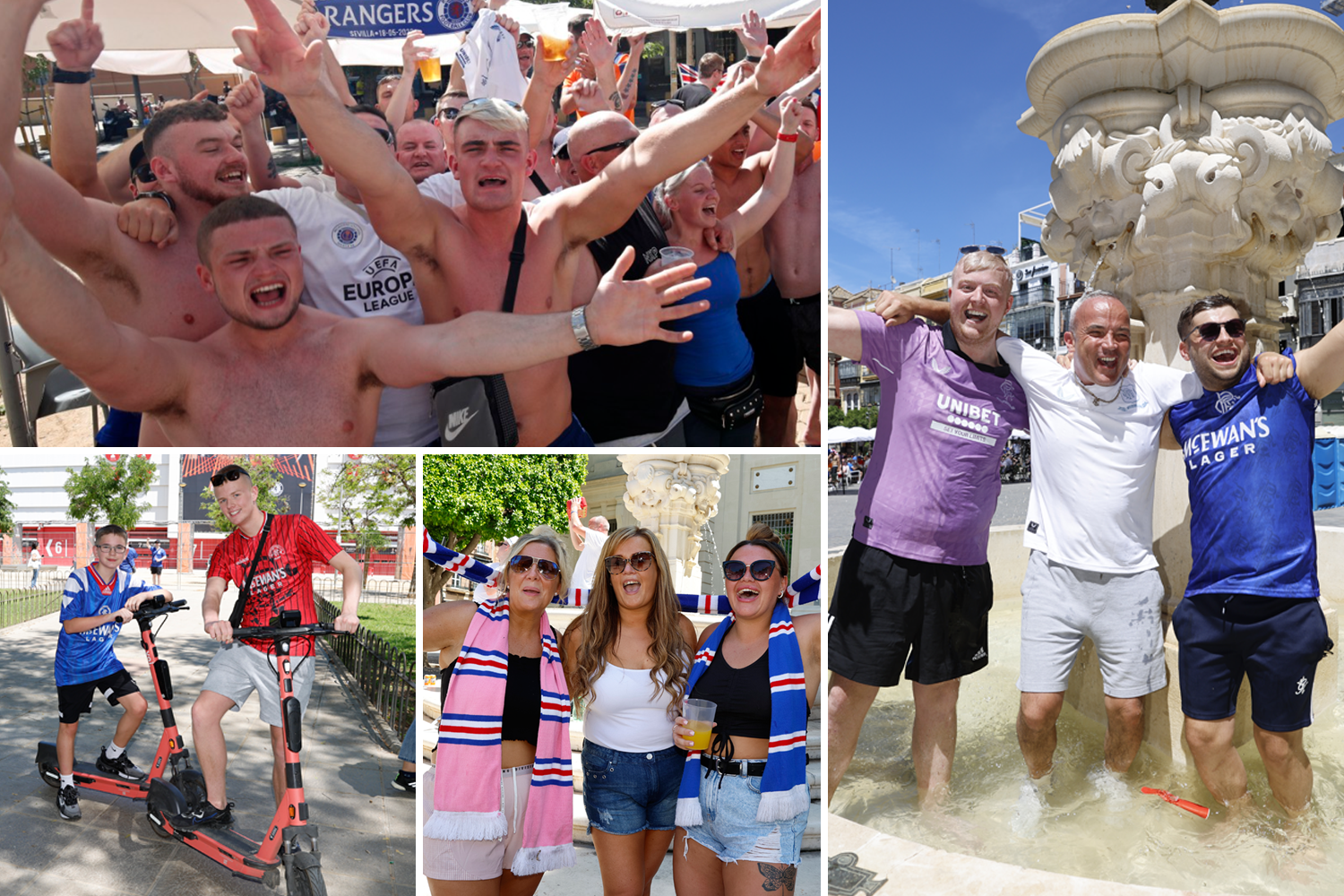 “When they were 100 metres from the bars on Paseo de Colon where it meets Adriano Street, officers managed to neutralise the situation with a police line formed with riot vans and by firing warning shots in the air.”

The spokesman added: “There were no serious injuries as a result of these incidents, except for a Rangers supporter who suffered a head wound. 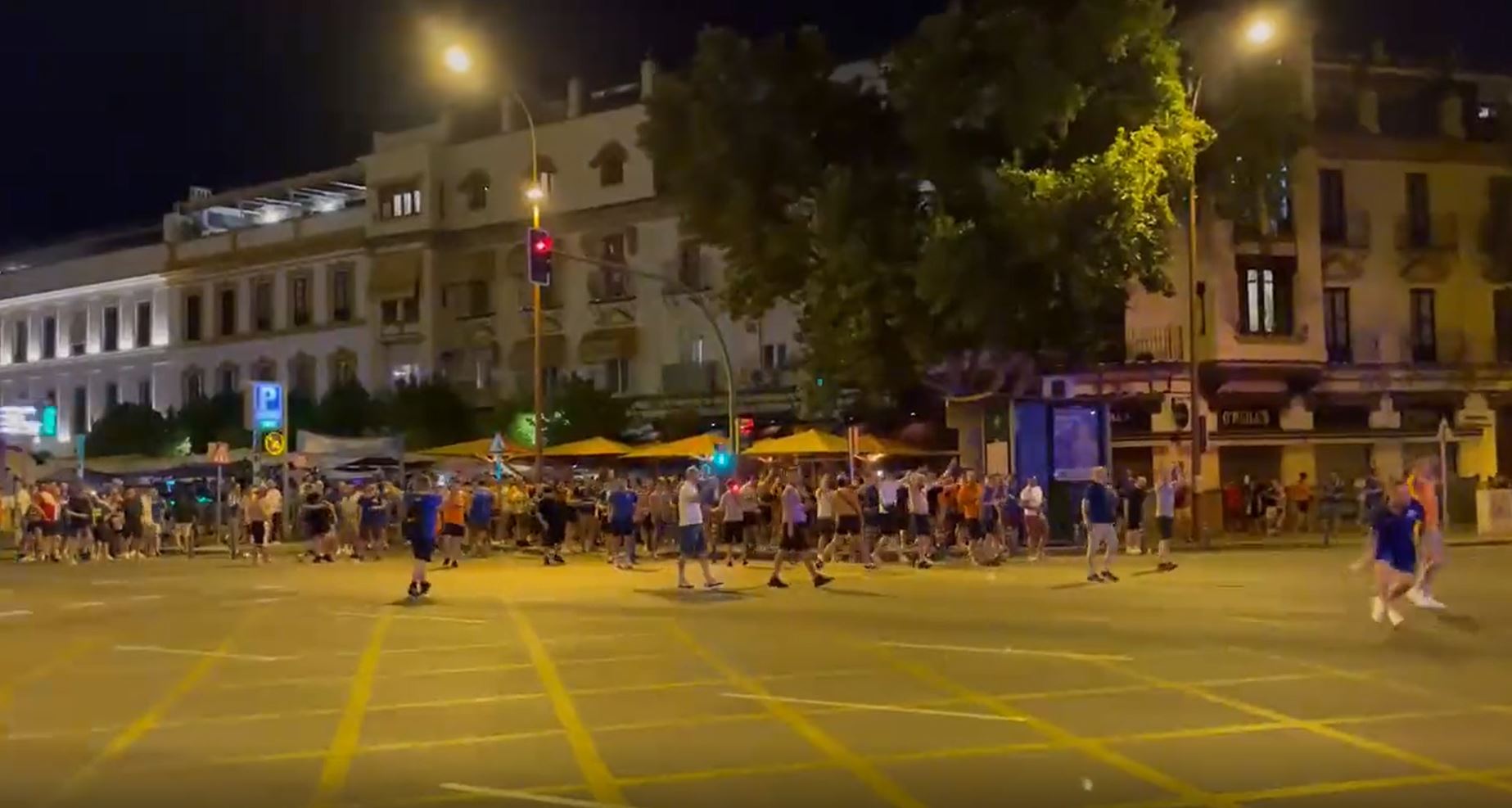 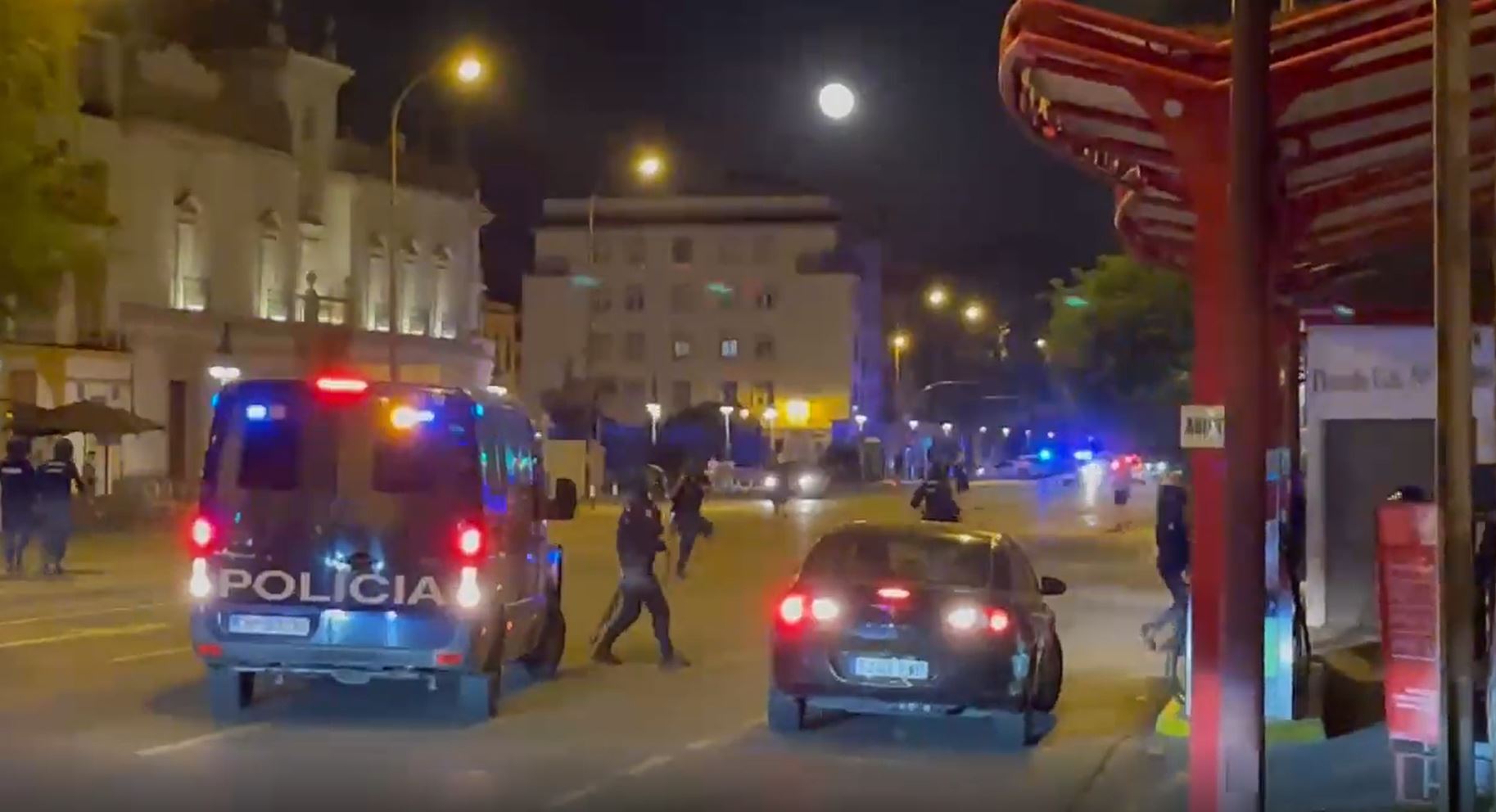