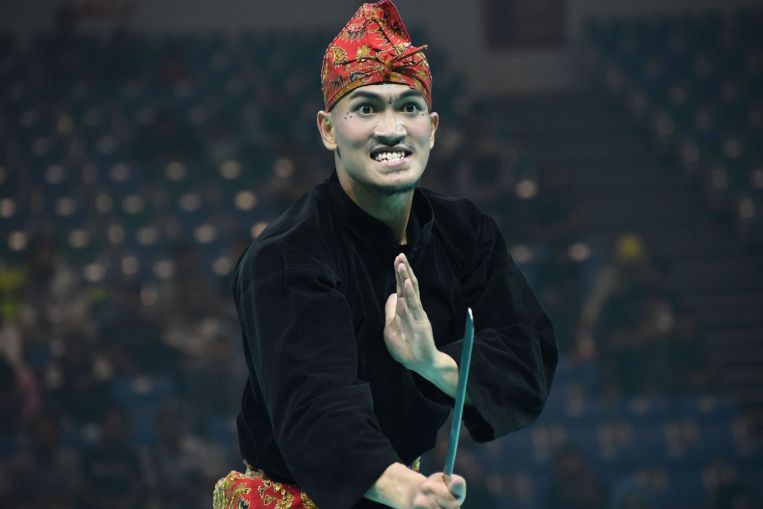 SINGAPORE – After suffering a heartbreaking loss in the final two years ago, Singapore’s Muhammad Iqbal Abdul Rahman vowed to train harder and smarter.

After all, he had just tried and failed to land a title at the World Pencak Silat Championship. For the fourth time.

But he knew that to be crowned the best in the business, he would have to overcome one of his heroes – Indonesia’s Sugianto Sugianto, the man who beat him that day and who went on to become the Asian Games champion this year.

So he slogged. And so confident was Iqbal, 25, in his preparations that he was even relishing competing against Sugianto again.

Unfortunately, he did not get his wish.

He did, however, claim the men’s artistic single title on the opening day of the 18th World Pencak Silat Championship at the OCBC Arena on Thursday (Dec 13).

“After the silver in 2016, I told myself that I have to beat this guy (Sugianto),” he told The Straits Times. “He’s a very good athlete and I look up to him, so I told myself I have to train harder and better. Unfortunately he didn’t compete here; I wanted him to come.”

Iqbal, whose previous best result at the World Championship was one silver each in 2015 and 2016, believes receiving the Sports Excellence (spex) scholarship this year after completing his national service helped his preparations.

“Previously, I felt I was still lacking something but I couldn’t find the answer,” he said.

A new training programme that focused more on improving match fitness boosted his confidence even before he stepped into the arena. “This year I got to train twice a day every single day and I had top-notch support… I managed to push myself even in the arena and I felt really confident,” he added.

“What I gave in the arena was more than 100 per cent, and that’s the difference it made.”

He was the last of 11 athletes in his category to perform his routine but after it ended, he “didn’t really look at the scoreboard”.

“I was just listening to my team-mates (to find out) whether I won or got second,” he said. “Once I reached them they told me, ‘You’re a world champion’ and that’s when the feelings started to come in… I’m very happy and proud that I could finally win it for Singapore because this is the fifth time I’ve tried to win (a world title) for the country.”

He paid tribute to the “tremendous” support from his family, noting that “they gave me moral support and (it) made me want to continue to at least win it for them”.

Iqbal was not the only Singaporean to win a first world title yesterday. Nurzuhairah Yazid (women’s artistic single) and the women’s artistic doubles pair of Nur Azlyana Ismail and Nurhanishah Shahrudin also had reason to celebrate after adding two golds to Singapore’s tally.

Asian Games runner-up Nurzuhairah, competing in the artistic single category at a World Championship for the first time, believes yesterday’s victory has made up for the family time that she has had to sacrifice in order to train. It also provides additional motivation as she bids to retain her SEA Games crown in the same category next year.

The 20-year-old added: “With this result, I can believe in myself more… I have no doubts (that I can) be better.”

More than 300 athletes from 40 countries are in town for the Dec 13-16 championship, which is taking place here for the third time and was previously hosted by Singapore in 1988 and 2004.

Rockets’ offence blown away by Hurricane of goals