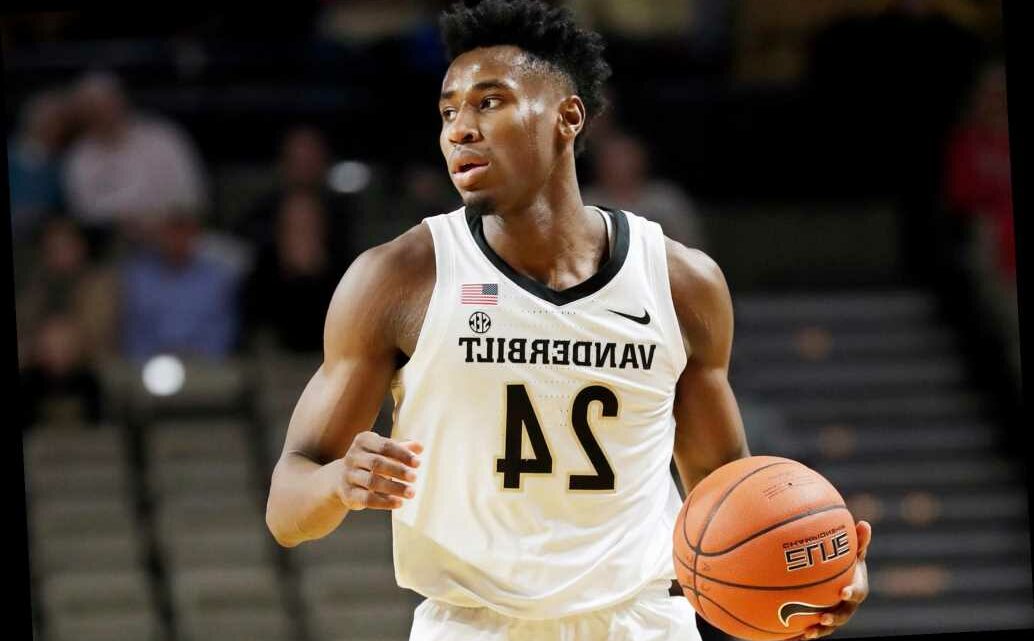 The Knicks aren’t sure there’s a likely All-Star at No. 8 in the Nov. 18 draft, unless either LaMelo Ball or James Wiseman fall to them.

That’s why The Post reported last month the strong consideration of moving back a few notches, netting a young asset and taking the best player available later in the lottery.

However, Vanderbilt coach Jerry Stackhouse believes a potential All-Star may exist when the Knicks come to bat at No. 8: Aaron Nesmith, his 6-foot-6 sophomore small forward/shooting guard marksman. Stackhouse likens him to Bucks’ swingman Khris Middleton.

Middleton, a two-time All-Star, and the 21-year-old Nesmith not only hail from Charleston, S.C., but also attended the same high school, Porter-Gaud.

Some scouts tag Nesmith as the top 3-point shooter in the draft, but his standing isn’t as a high lottery pick. He was injured in his sophomore season, suffering a stress fracture in his right foot that limited him to 14 games.

“We compare him to Khris Middleton,’’ Stackhouse told The Post in an email Sunday. “He’s perfect for the wing spot. He has the size. He has the strength and in addition to being a shooter, he is dedicated to the defensive side as well.”

Nesmith finished at a sensational 52.2 percent from 3-point land, launching 9.2 attempts per game. He averaged 23 points. As a freshman, Nesmith played 32 games and shot 33.7 percent from 3.

“Obviously, he can shoot the ball,’’ said Stackhouse, who weaved an 18-year NBA career as an elite shooting guard. “In the NBA, there is always a demand for shooters, and he’s one of the best shooters in all of college last year. There aren’t many better than him in the draft. But he’s also just a great person who cares about his teammates. He’ll always do what’s best for the team. He was a great leader for us, even after his injury last season.’’

It is noteworthy that Knicks GM Scott Perry is extremely tight with Stackhouse, dating to their Detroit days. Stackhouse interviewed with Perry for the Knicks head coaching job in 2018. Hence, if Stackhouse puts in a strong word on Nesmith, it will carry significant weight with Perry, who is seeking outside shooting after the Knicks ranked 27th in the league in 3-point percentage (33.3).

“He’s a competitor,’’ Stackhouse said. “He worked really hard in the summer before his sophomore season, and had great work ethic the whole year. He doesn’t take shortcuts.

“I say that he was a sponge. He wanted to learn and he soaked things up in terms of system development as well as personal player development. He learned the little things like how to use screens and setting screens to get himself more open looks.”

Still, when it comes to scoring wings, Florida State’s Devin Vassell, known as the prototype “3-and-D’’ guy, usually rates higher. A couple of mock drafts have the Knicks taking Vassell eighth, but sources said they would be surprised if the Knicks view Vassell that high. Both Nesmith and Vassell may be a likelier proposition in trade-down scenarios.

The Pelicans select 13th and have three second-round picks. A swap of the eighth pick for the 13th could net the Knicks at least one of New Orleans’ second-rounders (39, 42, 60). The Knicks have a lot of roster spots to fill, and a report stated the Knicks are open to adding another second-round pick to go with No. 38.

“I believe Vassell will be a star role player,’’ Fraschilla told The Post. “The potential is there to be a very good wing defender and someone who can make open shots. But he’s a fourth, fifth starter or rotation guy. So I would not take him with the eighth pick.”

Is Nesmith a stretch at No. 8? Maybe, maybe not.

“Nesmith is not as well-rounded defensively as Vassell but is the best pure NBA 3-point shooter in the draft,’’ Fraschilla said. “He can not only catch it and shoot it stationary but was great on the move in Stackhouse’s NBA sets.

“For old-timers like me, [Nesmith] reminds me of a Dale Ellis or Rolando Blackman.’’

Matt Babcock, the former NBA agent who produces a mock draft, feels the Nesmith-Vassell debate is a dead heat.

“It’s very close,’’ Babcock said. “Although both are good outside shooters, Nesmith certainly has the edge in that area. He is elite. However, Vassell is much better on the defensive end. All in all, I value both prospects pretty equally. I think either player would be an adequate option for the Knicks’ pick at eight.’’