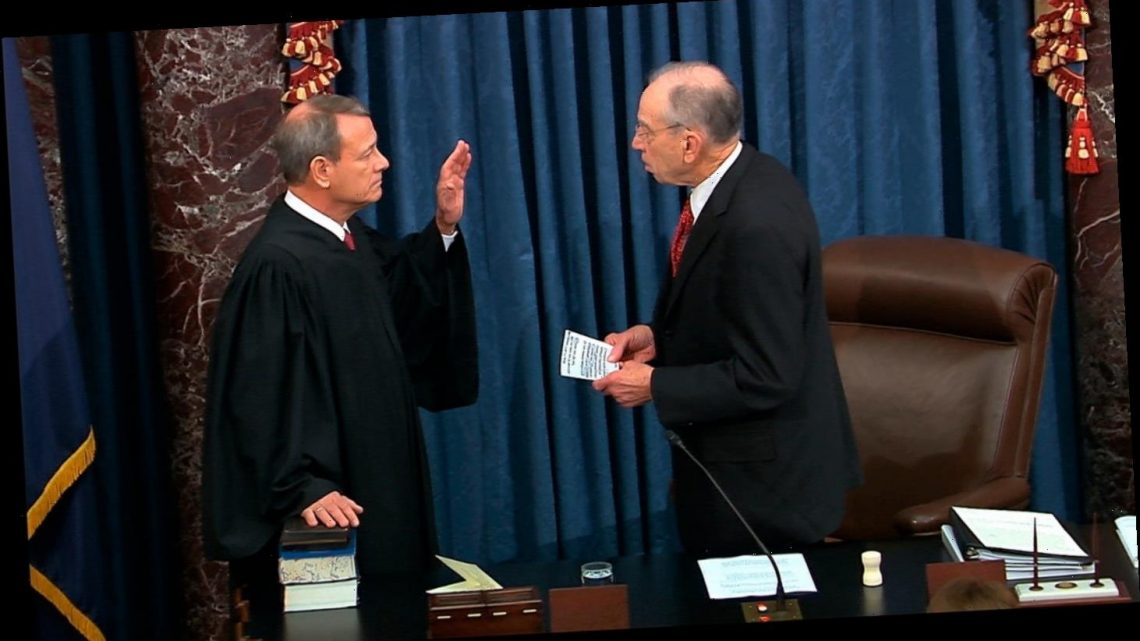 WASHINGTON – After six days of arguments from House Democrats prosecuting President Donald Trump in the Senate trial and the president’s defense team, senators begin up to 16 hours of questions for both sides on Wednesday.

Senators must submit the questions in writing, which Supreme Court Chief Justice John Roberts, who is presiding at the trial.

Senators said party leaders would review the questions to avoid repetition and offer some order to the proceeding. Roberts suggested that the House managers and the president’s lawyers try to answer each question within five minutes, although that isn’t a firm rule.

In this image from video, President Pro Tempore of the Senate Sen. Chuck Grassley, R-Iowa., swears in Supreme Court Chief Justice John Roberts as the presiding officer for the impeachment trial of President Donald Trump in the Senate at the U.S. Capitol in Washington, Jan. 16, 2020. (Photo: Senate Television via AP)

The opportunity for questions follows opening arguments, which granted each side up to 24 hours spread over three days to explain their positions. The seven House managers used nearly 22 hours of their time, according to C-Span, which broadcast the trial. Trump’s team finished in less than 12 hours, according to C-Span.

House Democrats accused Trump of abuse of power for pressuring Ukraine to investigate his political rival, former Vice President Joe Biden, while withholding $391 million in military aid. The House also accused Trump of obstruction of Congress for directing his administration to defy subpoenas from the inquiry.

But Trump’s defense team argued that the charges were too vague to enforce because they weren’t based on statutory crimes. Setting the bar so low for removal from office would leave future presidents vulnerable to impeachment when Congress is held by the other party, they warned.

Despite the lengthy arguments, senators on both sides said they have plenty of questions. Sen. Josh Hawley, R-Mo., said he wants to ask the lead manager, Intelligence Chairman Adam Schiff, D-Calif., about any contact his office had with the whistleblower who first raised the alarm about Trump’s dealings with Ukraine. Sen. Kirsten Gillibrand, D-N.Y., said she would like to ask about the removal of Marie Yovanovitch, the former U.S. ambassador to Ukraine.