Home » Sport » Sean McVay’s Age Is Just a Number. A Small One. 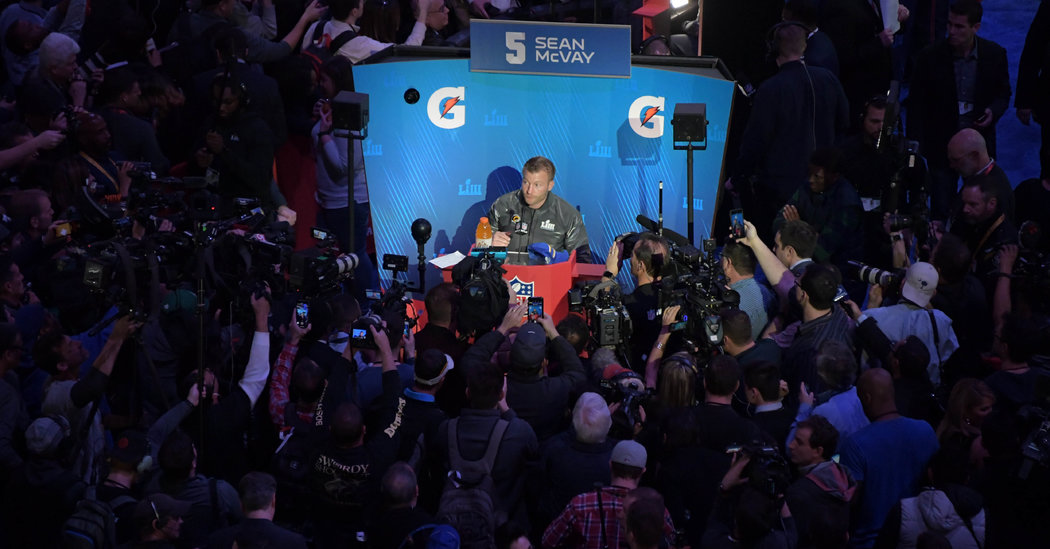 Sean McVay’s Age Is Just a Number. A Small One.

ATLANTA — Mozart was composing music at 5. Sergey Karjakin became a chess grandmaster at 12. Blaise Pascal invented the mechanical calculator as a teenager. And Sean McVay led the Los Angeles Rams to the Super Bowl at 33.

One of those four does not really qualify as a prodigy. But that has not stopped virtually everyone in the football world from throwing the word around in the last few weeks in reference to McVay, a second-year head coach who has become the toast of the N.F.L. in the lead-up to Super Bowl LIII.

As with most things Super Bowl-related, McVay-as-prodigy is a narrative born of something true and then expanded to an uncomfortable degree.

The rush to replicate McVay’s success began in earnest in January, when a league of teams that have often relied on retread coaches and established hierarchies suddenly was in need of its next boy genius.

The Green Bay Packers created a McVay coaching tree, of sorts, by hiring his former offensive coordinator, Matt LaFleur, who is 39, to be their head coach. The Cleveland Browns hired Freddie Kitchens, a 44-year-old offensive guru, to lead their staff. And in an extreme example of McVay mania, the Arizona Cardinals’ website, in its official announcement about the hiring of the 39-year-old Kliff Kingsbury as the team’s new head coach, noted that Kingsbury was friends with McVay.

That the two had never coached together seemed not to matter, though after some blowback, the team amended the announcement to remove the part about their friendship while still noting that McVay is a young “offensive genius who has become the blueprint of many of the new coaching hires around the N.F.L.” and had recently offered Kingsbury a chance to join the Rams as an offensive consultant.

“It’s certainly humbling and flattering,” McVay said of the hiring trend, “but I think more than anything it’s a reflection of the success the Rams have had.”

In the end, teams may discover that replicating McVay will be difficult.

Young, offensive-minded coaches are “the vogue thing right now,” said Brian Billick, the former Baltimore Ravens coach. “Some will be successful, and some won’t. Eighty percent will probably fail.”

Very few coaches have engineered the kind of turnaround that the Rams have made in two seasons under McVay, who, despite having coached in the N.F.L. since 2008, is younger than one of his players, and two of the Patriots. 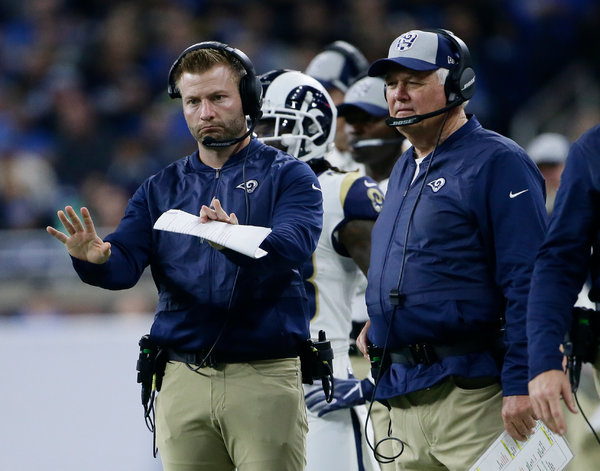 McVay, who has already become a master of coaching catchphrases and clichés, has regularly tried to expand the spotlight to the other coaches around him. He frequently uses the phrase “we, not me” to describe his team’s approach.

“One of the things that’s so important is surrounding yourself with great people,” he said, “specifically in those other areas where they have leadership roles.”

His call for inclusiveness extends to coaches of all ages. His first hire for the Rams was Wade Phillips, a 71-year-old defensive coordinator who had been coaching in the N.F.L. for 10 years when McVay was born.

Phillips said he was somewhat familiar with McVay, then the offensive coordinator of the Washington Redskins, before his hiring, but that it was a call from Phillips’s son, Wes, who had replaced McVay as Washington’s tight ends coach, that set the whole thing in motion. Wes Phillips asked his father if he would be interested in joining a McVay staff should the opportunity arise.

He added that the first call from McVay was straightforward: “He said, ‘Would you interested in going with me if I got a job?’ and I said, ‘Yeah, sure.’”

But even with the Phillips hiring serving as a nod to his elders, McVay seems content to play up his own youthfulness. Short and fit by N.F.L. coaching standards and naturally baby-faced, he spikes his hair up with product and trims his beard into a perfect 5 o’clock shadow.

He talks glowingly about watching Tom Brady win the 2002 Super Bowl — when McVay was 16 — and revels in getting congratulatory text messages from Patriots Coach Bill Belichick, who is twice his age.

And in what served as the perfect visual for the N.F.L.’s only millennial head coach, a video circulated recently in which Ted Rath, a Rams assistant, repeatedly pulled McVay out of the way of officials on the sideline, with the whole thing set to music. McVay is hardly the only coach to have a spotter charged with making sure he is out of the way, but the coach’s seeming obliviousness to Rath’s maneuvers created a scene that, depending on your age, reflected either a lack of situational awareness or a remarkable ability to focus.

The Prodigies Who Came Before Him

When McVay signed on to become head coach of the Rams, he was 30 years 11 months old, which made him the youngest person in that role in the N.F.L. since 1938, when Art Lewis, at 27, was hired by the Cleveland Rams (a team that would eventually move to Los Angeles, then to St. Louis, and then back to Los Angeles).

Before McVay, the youngest N.F.L. head coach of the modern era was Lane Kiffin, who was hired by the Oakland Raiders at 31 years 8 months old (and then fired 20 months later), and the youngest head coach to lead his team to a Super Bowl was Mike Tomlin of the Pittsburgh Steelers, who was 36. For an idea of how unusual it is for coaches to reach the league’s pinnacle that early, the previous seven Super Bowls have been won by coaches who were 50 and older.

Billick is one of the few people who can relate to McVay’s experience of being the N.F.L.’s hot new thing. Hired to coach the Ravens in 1999, after coordinating a Minnesota Vikings offense that averaged an eye-popping 34.8 points a game, Billick turned the hype into results by winning a Super Bowl in his second season, a feat McVay could match on Sunday.

Billick called McVay a brilliant coach, praising his ability to change up looks at the line of scrimmage. But he could not quite stop himself from diluting the praise by pointing out that there is relatively little difference between the offense McVay runs and the one employed by Belichick and New England’s offensive coordinator, Josh McDaniels.

McDaniels also took a turn as the N.F.L.’s coveted young coach. Ten years ago, he left the Patriots at 32 to become the Denver Broncos’ head coach, a job he lost 12 games into his second season.

The similarities between him and McVay led to an amusing scene on Monday involving a reporter and McDaniels.

“Everyone continues to talk about Sean McVay and his young mind, and they seem to have forgotten about you,” the reporter said before asking, “What kind of advice do you have for him?”

McDaniels, who is still just 42, clearly had anticipated questions about McVay, even ones as harshly worded as that. He jumped right in with praise.

“There’s nothing you can say about what Sean’s done that’s not in some way shape or form a superlative,” McDaniels said. “He’s pretty special. I think we need to appreciate him for what he is and who he is and what he’s done at an early age.”

The Road to Los Angeles

The grandson of John McVay, who was a Giants head coach and an executive who helped shape the dynastic San Francisco 49ers of the 1980s and 1990s, Sean McVay was a star quarterback in high school — he was named Georgia’s 4A offensive player of the year over Calvin Johnson in 2003 — but a transition to wide receiver at Miami University did not lead to any professional opportunities.

His first stop in the N.F.L. was as an assistant wide receivers coach for the Tampa Bay Buccaneers in 2008. He worked under Jon Gruden and Gruden’s younger brother, Jay, who was an offensive assistant. Aside from his grandfather, McVay said, those two men have had the largest impact on his career.

“Jon Gruden taught me the foundation of what I know about this game,” he said. “Took me under his arm, taught me to see it from a big-picture perspective.”

McVay went on to coach tight ends for the Redskins, and eventually worked again for Jay Gruden, who became Washington’s head coach in 2014. He promptly promoted McVay, at 28, to offensive coordinator.

After developing Kirk Cousins as a quarterback, McVay was hired by the Rams to revamp their moribund franchise.

In the announcement of McVay’s hiring, Stan Kroenke, the Rams’ owner, set the bar extremely high for success.

“We are confident in his vision to make this team a consistent winner,” Kroenke said, “and we will all continue to work together to achieve our ultimate goal — bringing a Rams Super Bowl championship home to Los Angeles.”

Benjamin Hoffman is a senior staff editor and regular contributor to the Keeping Score column in sports. He joined The Times in 2005. @BenHoffmanNYT • Facebook

I Said "I Love You" For The First Time On Valentine’s Day — A Year After Swearing Off Love, For Good
World News