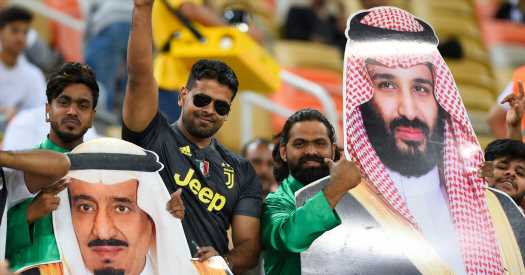 Nothing is off the table. Not a bid to buy one of England’s biggest soccer clubs. Not rich offers for multimillion-dollar broadcast packages. Not even an improbable bid to secure the hosting rights to the 2030 World Cup.

As Saudi Arabia sets course to spend its way to the top table of global soccer, the heart of those efforts is a bid to land the sport’s biggest prize. To accomplish its goal, Saudi Arabia has hired Boston Consulting Group to analyze how it could land the quadrennial tournament — one of the most watched events in sports — only eight years after Qatar will become the first country in the Middle East to stage the event.

Several other Western consultants have been asked to help with the project, according to one of the advisers exploring the feasibility of a Saudi bid, and acknowledge that it will require “out of the box thinking” — including, potentially, an agreement to share the hosting rights with a European partner. And despite Saudi Arabia’s growing influence in soccer, the bid, particularly in its current form, is considered a long shot.

Sports has fast become a central pillar of Saudi Arabia’s Vision 2030 program — a strategic effort to pivot the kingdom away from oil dependency — but more recently, the country is making a concerted effort behind the scenes to join its regional rival Qatar as a major power broker in soccer.

The strategy has had mixed success. Saudi Arabia has enticed leagues in Italy and Spain to sign lucrative contracts to bring their domestic cup finals to the country. But efforts backed by its sovereign wealth fund to acquire an English Premier League club and the broadcast rights to the Champions League have so far failed.

Regardless of the results, its ambition remains untrammeled. Saudi Arabia is determined to be in the ring for all of soccer’s major properties, and at the heart of those efforts most recently is the World Cup.

Human rights groups have long been vocal opponents about staging major sporting events in Saudi Arabia, particularly since the kingdom was accused of complicity in the murder of the Saudi journalist Jamal Khashoggi in 2018.

But perhaps the most pressing difficulty to bring a World Cup to Saudi Arabia is a technical one. Since Qatar will stage the first Mideast World Cup next winter, any Saudi Arabian bid would require soccer’s global governing body, FIFA, which runs the tournament, to change its policy of continental rotation in order to bring the event back to the region.

One option under consideration is to join with a major European nation also hoping to host the World Cup. So far, only Britain and a partnership of Portugal and Spain, a country whose soccer federation has forged close ties to Saudi Arabia, have publicly announced their intentions to enter the bidding process. Italy, another of Saudi Arabia’s soccer allies, is also considering an effort to host the event for the first time since 1990.

Such a cross-continental offer would also require a change of policy from FIFA, which has never staged a tournament on two continents. The 2002 World Cup was shared by the Asian neighbors Japan and South Korea. And the joint United States, Mexico and Canada competition in 2026 will be the first time the World Cup, which by then will have expanded from 32 to 48 teams, is staged in three countries.

For a Saudi bid to be successful, organizers could once again have to be persuaded to shift the dates of the tournament from their traditional June-July window to November-December to account for hot weather in the Gulf. The global soccer schedule had to be upended to ensure Qatar could stage the tournament safely, and European leagues whose schedules would be upended might be reluctant to repeat the interruption.

Saudi Arabian hopes, though, are boosted by the kingdom’s close links to FIFA and its president, Gianni Infantino, who recently drew criticism from human rights groups after playing a starring role in a promotional video for the Saudi ministry of sport.

In January, Infantino held talks with Crown Prince Mohammed bin Salman, the architect of Vision 2030. And FIFA’s membership agreed last month to a motion offered by Saudi Arabia’s soccer federation to study the possibility of holding the World Cup every two years instead of its current quadrennial format.

That change could allow even more countries to enter the bidding.

“It is time to review how the global game is structured and to consider what is best for the future of our sport,” the president of Saudi Arabia’s soccer federation, Yasser al-Misehal, said at the time. “This should include whether the current four-year cycle remains the optimum basis for how football is managed both from a competition and commercial perspective.”

A spokesman for the Saudi Arabian soccer federation declined to comment on a possible World Cup bid, but did point out that the country was fast becoming a destination for high-profile sporting events. In recent years, it has staged major boxing matches, motor races and golf events.

“We’re keen to take the stage in the global game as well, turning our passion into on-pitch success, as well as greater collaboration with the international football family,” the Saudi soccer federation said in a statement.

Saudi Arabia, despite its largess, also needs to rebuild bridges with a soccer economy still smarting from the effects of a sophisticated pirate television network based in the kingdom that for years stole billions of dollars worth of sports content, repackaged it and sold it to Saudi subscribers. FIFA, as well as major competitions like England’s Premier League and Spain’s Liga, were blocked from filing legal claims in Saudi Arabia to protest the piracy.

The network that broadcast the stolen matches, BeoutQ, formed during a regional dispute with Qatar, is now off the air. And while the conflict with Qatar has largely been healed, beIN, the Qatari-owned sports broadcaster, remains banned in Saudi Arabia. That means the only way soccer-mad Saudis will be able to watch this summer’s European soccer championship, and a parallel event in South America, will be through illegal broadcasts.

European soccer’s governing body on Wednesday rejected a Saudi offer of around $600 million to broadcast the Champions League regionally, preferring to stick with its current partner, beIN.