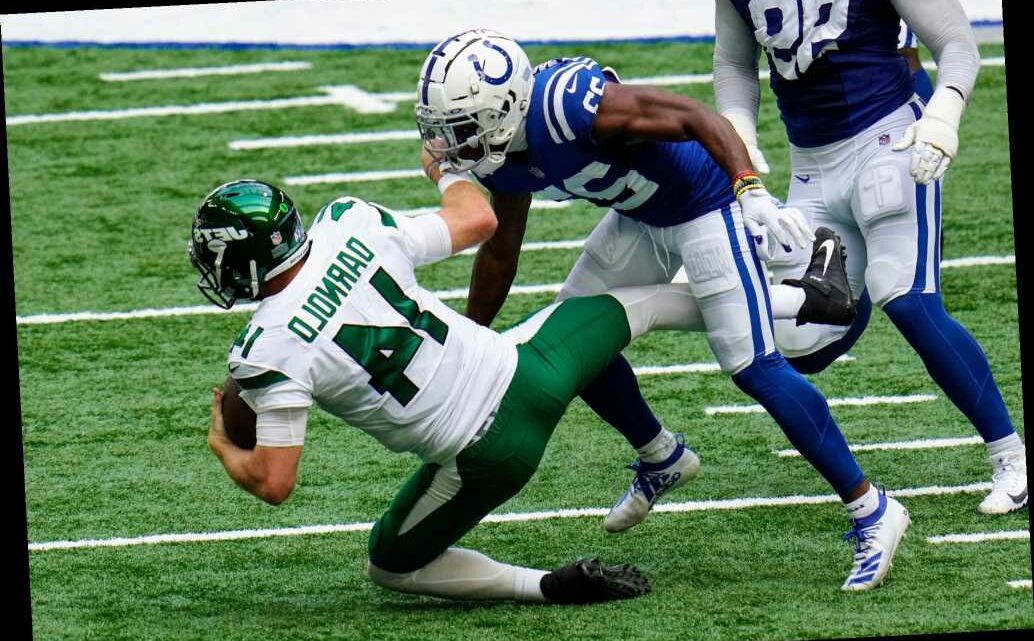 INDIANAPOLIS — The performance of the Jets and quarterback Sam Darnold on Sunday can only have Jets fans dreaming of Trevor Lawrence and a new coach to go with him.

What else is there to look forward to in this miserable season?

Darnold threw three interceptions, two returned for touchdowns, in a 36-7 loss to the Colts, another embarrassing loss that dropped the Jets to 0-3 and gave further proof that they are the worst team in the NFL. This year, the worst team in the NFL will get the reward of the No. 1 pick and the ability to draft Lawrence, Clemson’s star quarterback.

There is not much left for Jets fans to dream about. This team is going nowhere. Adam Gase looks like a dead coach walking. His offense again stunk. The Jets have lost by a combined 57 points in these three games. If the Jets are terrible again on Thursday night against the Broncos, you have to wonder if the Jets make a change. Jets fans would take anyone other than Gase at this point.

As bad as Gase has been, Darnold also deserves plenty of blame for this one. Darnold made a few nice plays, including a touchdown pass after a scramble, but the mistakes outweighed the good moments, as they have for most of his career. Darnold had backups playing at wide receiver, but his decision-making still makes you wonder if he’ll ever be the quarterback the Jets hoped when they took him No. 3 overall in 2018.

On Sunday, Darnold became the first Jets quarterback to throw two pick-sixes since Geno Smith in 2013. Darnold finished the game 17 of 29 for 168 yards with one touchdown and the three interceptions for a QB rating of 47.0.

The Colts defense outscored the Jets offense, 16-7, with the two pick-sixes and a late safety.

As bad as Darnold and the offense were, the Jets defense nearly matched them. It had no pass rush and no pass coverage. That led to Philip Rivers (17 of 21 for 217 yards, 1 TD) slicing up the defense. Rivers got to watch the end of the game from the bench as the Colts put backup Jacoby Brissett in for mop-up duty.

Any thoughts of the Jets getting out to a quick start ended with Darnold’s second throw of the game. Colts cornerback Xavier Rhodes intercepted the pass intended for rookie wide receiver Lawrence Cager and returned it 44 yards for a touchdown and a 7-0 Colts (2-1) lead not even three minutes into the game.

Darnold rebounded on the next series, engineering a 14-play drive that ended with a spectacular touchdown pass to Braxton Berrios. On the drive, Darnold used his legs effectively. He scrambled for one third-down conversion and then kept the play alive on the touchdown. It looked like he was going to be sacked but evaded the rush somehow and then squirted out to his right and found Berrios for the 16-yard touchdown to tie the game at 7-7.

The Jets defense finally took the field with 5:12 left in the first quarter. A week after they gave up an 80-yard touchdown on the first play of the loss to the 49ers, Gregg Williams’ unit limited the big plays but Rivers carved up their soft zone. Rivers had throws of 10 and 20 yards before finishing off the drive with a 1-yard touchdown pass to tight end Mo Allie-Cox. It was Rivers’ 400th career touchdown and gave the Colts a 14-7 lead.

The Colts extended the lead to 17-7 on a 42-yard field goal by rookie Rodrigo Blankenship with 8:43 left in the half.

Darnold’s second interception did not give up points to the Colts, but felt equally as deadly. The Jets marched down the field and had a first down at the Colts’ 7. At worst, you figured they would come away with three points and be down by a touchdown. But Darnold again got picked off by Rhodes on a pass to Cager. Rhodes had dropped off of Cager and the rookie was open for a second but by the time Darnold’s pass got there, Rhodes had recovered and his interception crushed the Jets’ hopes.

The Jets got lucky before halftime. Gase mismanaged the clock and gave the Colts the ball back with 44 seconds left at their own 41 with two timeouts. But Blankenship’s 41-yard field-goal attempt hit the right upright and the Jets went into halftime down by 10 points.

Their offense suffered another significant injury loss in the first half when rookie tackle Mekhi Becton left the game with a shoulder injury. That left the Jets playing without either starting tackle, their top three wide receivers and their starting running back.

The Colts tacked on insurance points with 5:21 left in the third quarter when Jonathan Taylor scored on fourth-and-goal from the 1, juking Bradley McDougald in the hole to reach the end zone to make it 24-7.

Then, Darnold served up his second pick-six of the day to cornerback T.J. Carrie, who returned it 47 yards for the touchdown and the exclamation point on the win. Justin Houston added another one, sacking Darnold for a safety with 4:50 left in the game. Blankenship’s second field goal made it 36-7 with 2:04 left.