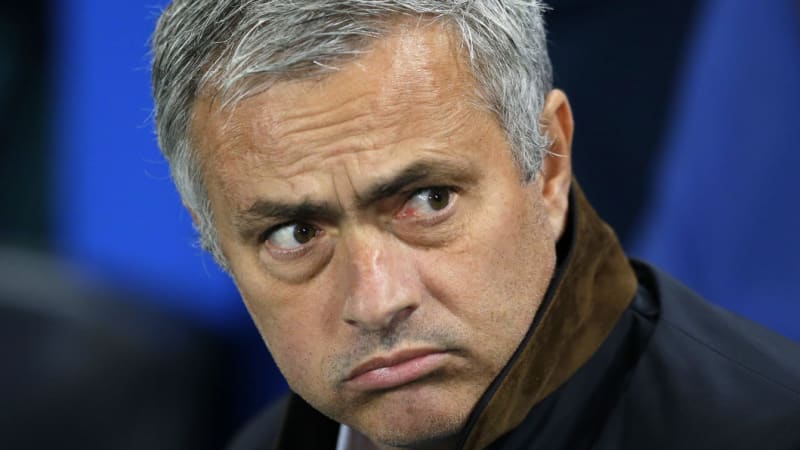 Manchester United have announced the departure of coach Jose Mourinho after their worst start to a season since 1990-91.

In a statement, the club said: "Manchester United announces that manager Jose Mourinho has left the club with immediate effect. 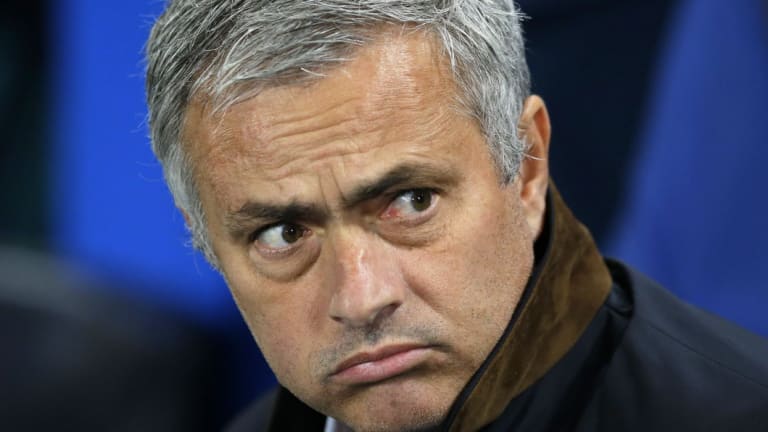 "The club would like to thank Jose for his work during his time at Manchester United and to wish him success in the future."

The club's website crashed soon after the news was revealed.

United's 3-1 defeat to Liverpool at the weekend means they have 26 points after 17 Premier League games, their worst tally at this stage of the season since 1990-91.

Speculation had mounted over the Portuguese coach's future following the loss, which left the team 11 points away from the top four positions that earn a place in the lucrative UEFA Champions League next season.

A new caretaker manager will be appointed until the end of the current season, while the club conducts a thorough recruitment process for a new, full-time manager, according to the statement. 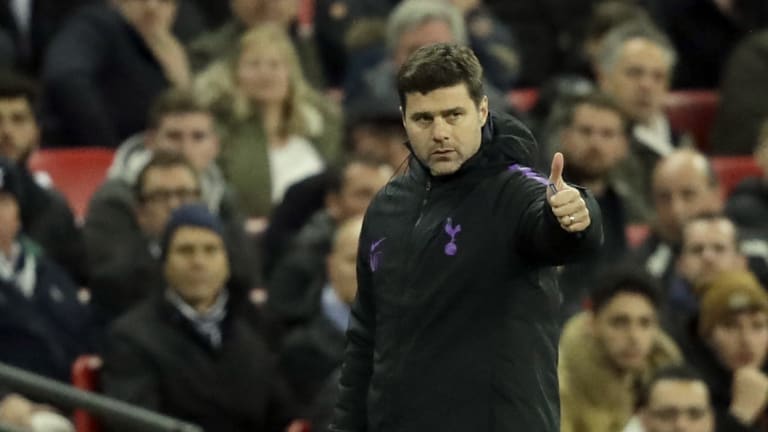 Man for the job: Mauricio Pochettino was immediately made the bookies’ hot tip to replace the sacked Manchester United manager.Credit:AP

Pochettino has been seen as a long-term target for United because of his preference for attacking football and nurturing young talent, neither of which has been much in evidence at the club since the departure of Alex Ferguson in 2013.

The Argentine was offered at odds of 2/1 against – meaning one chance in three – within minutes of United announcing Mourinho's sacking.

Pochettino is closely followed at 4/1 against by former Real Madrid manager Zinedine Zidane, who led the Spanish side to three successive Champions League titles.

Former United midfielder Michael Carrick, now a coach at the club, is quoted at 10/1, just behind former Monaco boss Leonardo Jardim, on 9/1.

It may be strange for some United fans to countenance but former Arsenal boss Arsene Wenger is at 20/1, the same as Bournemouth manager Eddie Howe.

Mourinho started his two-year tenure at United by winning two titles in his first season – the English League Cup and the Europa League – but failed to win a trophy in his second season and was criticised for the team's pragmatic playing style and his treatment of some players.

His relationship with Paul Pogba, the club's record signing, appeared broken after leaving the France midfielder out of the team for their last three league games.

Mourinho had also been unhappy that United's board failed to back his wish to sign a central defender in the off-season. United has already conceded more goals in the league than it did in all of last season. 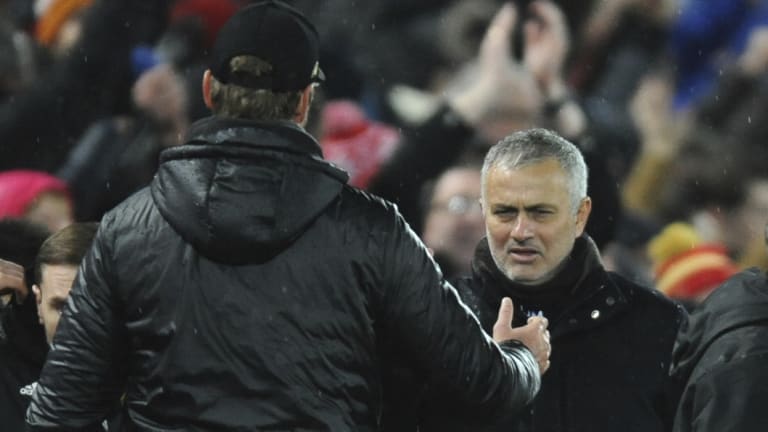 United is currently sixth on the Premier League table. Mourinho said after Sunday's loss 3-1 loss at Liverpool that a top-four finish was still possible.

"Now, we must aim for fifth and probably later we can look to fourth," he told Sky Sports. Even fifth-placed Arsenal are eight points away. 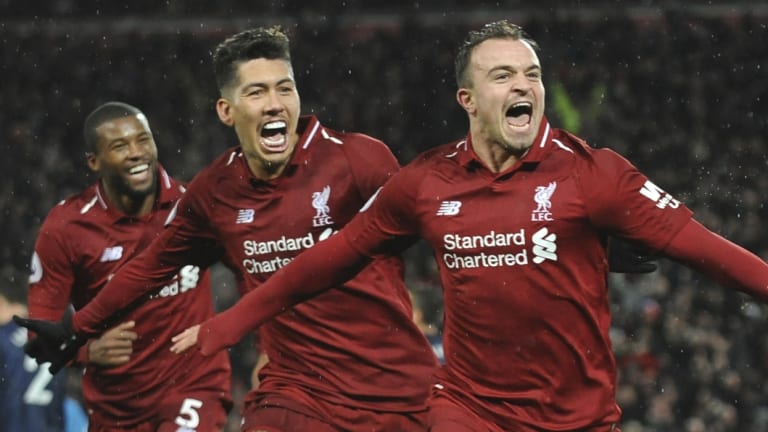 Mourinho had lamented his team's lack of physicality and their problems with injuries after their loss to Liverpool.

The league-leading Reds are now 19 points ahead of United after just 17 matches but the 11-point gap to the Champions League spots was arguably even more concerning for Mourinho, who shouldered the responsibility for the defeat.

"I am really, really happy with the players that I had on the pitch, with their attitude, with their effort. I am more than happy," said the Portuguese, who left Pogba on the bench at Anfield.

Mourinho said the club's difficulties with injuries had been a long-term issue. 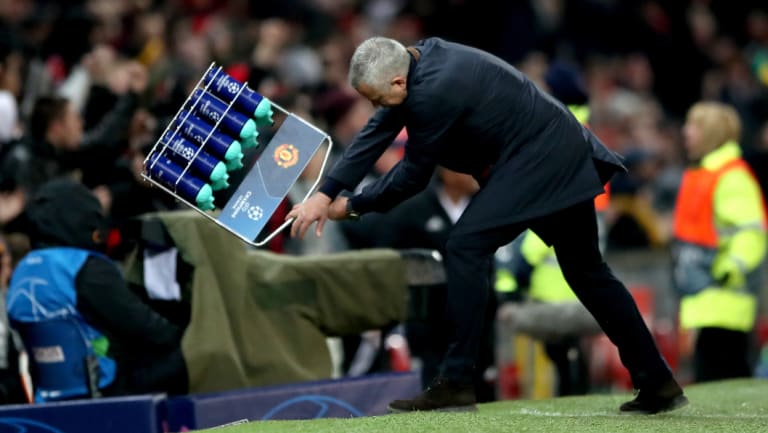 Going wild: Mourinho slams a rack of water bottles into the ground in an expression of “relief” after Manchester United snatched a last-gasp win to reach the Champions League last 16.Credit:PA

"First of all, we have lots of problems related to physicality, we have lots of players that I could consider injury-prone, because some of our players are always injured and is not with me, was before me," he said.

United were forced to draft centre-half Eric Bailly into the starting line-up moments before the game after Chris Smalling suffered an injury during the warm-up.

The only other way for Manchester United to keep their place in Europe's most lucrative competition would be to win this season's Champions League. Although after being paired with French giant Paris St-Germain in Monday's draw, that looks an even bigger stretch.

United are rated 40-1 outsiders to win the tournament, according to bookmaker William Hill, with local rivals Manchester City favorite at 11-4.