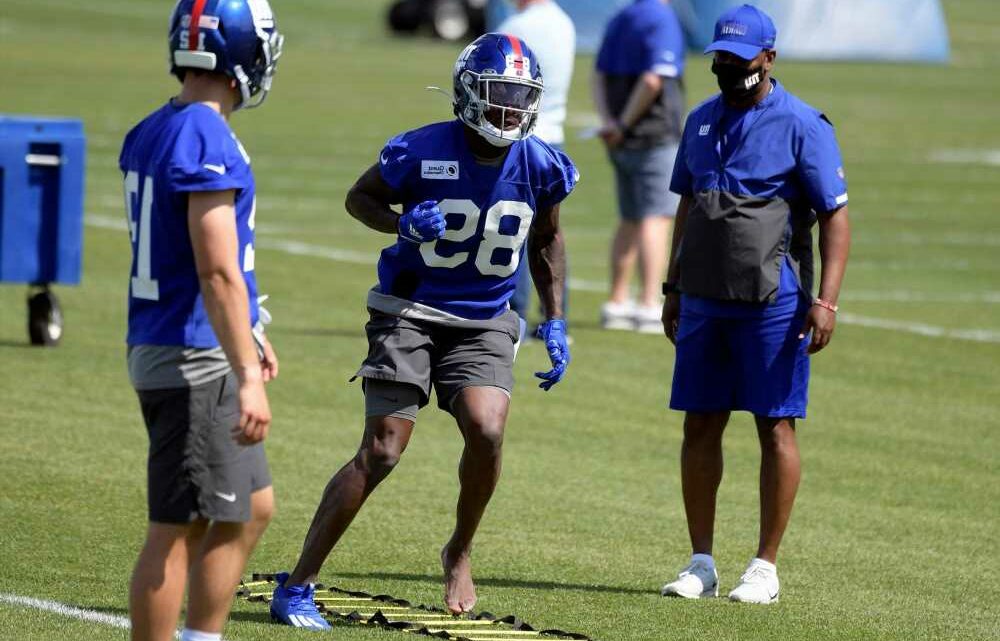 Tom Brady to Giants fans: Why do you hate me?

One of the first actions for Kadarius Toney as an NFL player, on the first day he donned a Giants practice uniform, was a simple agility drill, during which he brought his knees up, stutter-stepped and then caught a football flipped to him.

Nothing to see here on Friday, as the Giants opened up their three-day rookie minicamp. Except for Toney’s footwear. Or lack thereof.

Toney, the Giants’ first-round draft pick, was wearing only a blue sock on his left foot. There was no sock or cleat on his right foot. Yup, the barefoot rookie.

“He had a little bit of an equipment issue. We [have] got to get that straightened out,’’ head coach Joe Judge said, unsmiling, “make sure our guys hit the field with equipment they’re comfortable with. We’ll handle that, make sure that’s not an issue going forward.’’

The plan is to have Toney inject a heavy dose of playmaking into the Giants’ offensive attack. To have him, in a sense, juke defenders out of their shoes. First things first, though: Toney has to keep his own cleats on his own two feet.

“Yeah, I ended up getting it eventually,’’ Toney said, explaining that his Giants-issued cleats were initially the wrong size.

Stuff happens. But why not go off to the side, miss a few reps in the drill and get a pair of correctly sized shoes?

When it came time for the end of workout conditioning running, Toney stayed off to the side, not joining his teammates in sprints on a picture-perfect, blue-sky late afternoon.

“It was kind of basically just cleats,’’ Toney said. “Just the safer route to go, I guess you could say.’’

So, all was not sunshine and roses for Toney on his first day. Remember when Eli Manning’s first pass in his rookie minicamp sailed and bounded off a tackling sled? It wasn’t long ago Darius Slayton dropped nearly everything thrown his way on his first day on the job. Toney has time to make amends.

“I was pretty anxious to get out there,’’ he said. “If I was limited or anything I had to deal with that. I was eager to really just go out there and show the coaches what I can do. They came and took a chance on me, the least I could do is show them my ability and what I can actually bring to the organization.’’

The Giants had their sights on Alabama receiver DeVonta Smith at No. 11 in the draft, but the Eagles traded up to No. 10 and took him. That prompted a trade down to No. 20 to take Toney, the No. 4 wide receiver on their draft board, a player with a unique set of skills.

The Giants need tackle-breakers. Their ability to make something out of nothing in 2020 was dismal. They were 31st in the NFL in yards after the catch, with 1,275 yards. The Chiefs were No. 1 at 2,456 yards. It is no wonder the Giants made it their mission to upgrade their offensive playmaking ability, prioritizing these upgrades in free agency (Kenny Golladay) and in the draft (Toney).

The 6-foot-4 Golladay is certainly a big-play threat; his career average in four seasons with the Lions is 16.8 yards on his 183 receptions. That is serious production. He can wriggle out of tackles, but is more adept at outmuscling or outjumping defenders, and specializes in making contested catches.

The rest of the receiving corps is lacking in breathtaking breakaway ability. Sterling Shepard, mostly a slot target, is reliable, but averaged just 9.9 yards per catch last season. Slayton averaged 15 yards per catch, relying more on his speed to get past cornerbacks. The Giants took a flier on John Ross, a former Bengals first-round pick, but he is a speed guy all the way.

Although not considered to be an accomplished route-runner, he is a demon with the ball in his hands. In 186 career touches (120 receptions, 66 rushing attempts) at Florida, he forced 64 missed tackles, the most in college football. If Daniel Jones can get it to Toney, there is a good chance the receiver will reward the Giants with more than the intended goal of the actual play. If running back Saquon Barkley returns to full health following reconstructive knee surgery, there will be at least two players on offense capable of turning a little into a lot.

“Really, maybe just mindset, knowing that the ability you’re blessed with, you’re able to do it consistently,’’ Toney said of his ability to make defenders miss.