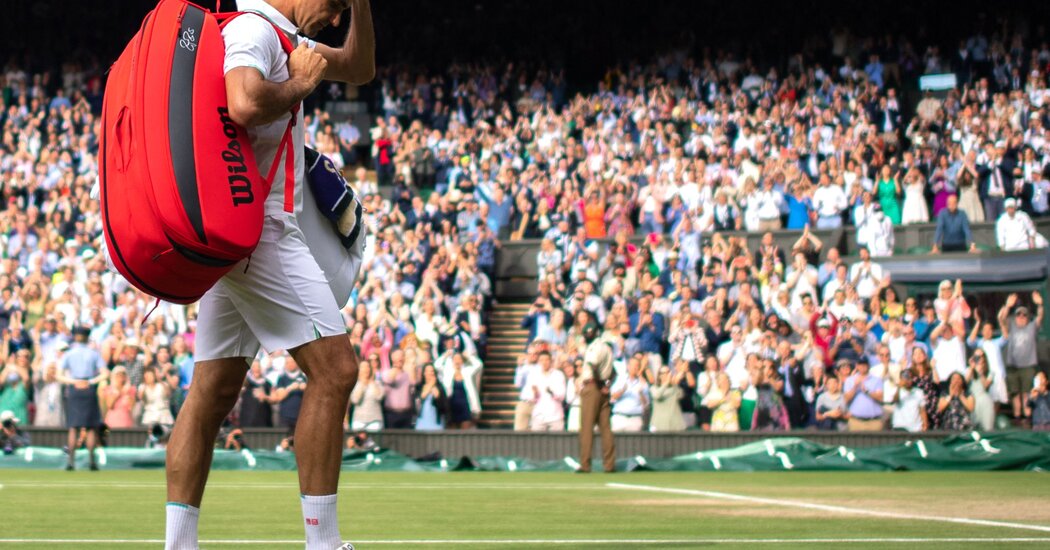 There will be no U.S. Open for Roger Federer this year, and after his announcement on Sunday that he will have yet another knee operation, it is time to question whether he will play tennis on tour again.

For now, Federer, one of the greatest athletes of this or any era, does not intend to retire, but after turning 40 last Sunday and after two operations on his right knee in 2020, he is well aware that the odds are heavily against him.

He is an optimist, no doubt, long inclined to see the water bottle as half full. He has been successfully fending off retirement (and retirement questions) for more than a decade, but even he looked and sounded glum on Sunday as he described his situation in a post on Instagram, a medium that did not exist when he began playing Grand Slam tournaments in the late 1990s.

“I will be on crutches for many weeks and also out of the game for many months,” Federer said. “It’s going to be difficult of course in some ways but at the same time I know it’s the right thing to do. Because I want to be running around later as well again, and I want to give myself a glimmer of hope also to return to the tour in some shape or form. I am realistic, don’t get me wrong. I know how difficult it is at this age right now to do another surgery and try it, but look, I want to be healthy.”

For most of his remarkable career, Federer seemed to lead a charmed existence: free of major injury and ennui in a Darwinian sport that can grind down players’ bodies and psyches.

Where others saw inconvenience, he saw opportunity: embracing the tour, the competition, the news conferences and the grueling travel even when he and his wife, Mirka, were on the road with their four young children.

“All I can tell you after four years of traveling with him is that he was one of the best at not complaining and not letting people know what was going on if he was having physical problems and not using stuff as an excuse,” Paul Annacone, his former coach, said in a telephone interview on Sunday.

Federer had to cope with chronic back pain and other ailments as he rose to prominence and stayed there.

“He has made it look a lot smoother than it was,” Annacone said.

He did not have his first operation of any kind until 2016 when he was 34. After a six-month layoff in the wake of that left knee operation, he roared back in 2017 to win the Australian Open and Wimbledon. In 2018, he ran his total of Grand Slam singles titles to 20, a men’s record, by winning the Australian Open again.

But fortune has not favored him of late. In 2019, he had two championship points on his serve against Novak Djokovic in the Wimbledon final and was unable to convert, losing in five sets.

In 2020, he required two operations on his right knee. He missed more than a year of competition, and though the first stage of that forced break coincided with the tour’s pandemic hiatus, he struggled to hit his customary high notes after his return as he competed sporadically.

He played five tournaments in 2021 and was able to reach the quarterfinals only at Wimbledon, where he was beaten, 6-3, 7-6 (4), 6-0, last month by Hubert Hurkacz, a talented Polish player who has yet to reach a Grand Slam singles final. If that turns out to be Federer’s final match at the All England Club or his final match on tour, it is far from fitting. But his failure to win so much as a game in the third set on the court where he has won a men’s record eight singles titles was also a sign that something was awry.

He confirmed that on Sunday while making it clear that his 2021 season was over.

“I hurt myself further during the grass-court season and Wimbledon,” he said. “It’s just not the way to go forward.”

He suggested that doctors had told him that surgery was his best option, not just for tennis but for life after tennis.

“Unfortunately, they told me for the medium to long term to feel better I will need surgery, so I decided to do it,” he said.

Federer did not explain the nature of his surgery or even which knee would require surgery. His agent Tony Godsick did not immediately respond to messages seeking clarification.

But Nicholas DiNubile, an American orthopedic surgeon from Philadelphia who specializes in knee surgeries, said that Federer’s timeline — “many weeks” on crutches and “many months” away from the tour — suggested that this could be a more serious operation.

“As a knee specialist, I’m certainly concerned,” DiNubile, who has never treated Federer, wrote in an email. “More surgeries are not necessarily better. At this point, he is probably not dealing with simpler things like meniscus tears but rather the arthritis and cushion (articular cartilage) damage that tends to occur over time. If wear and development of arthritis is part of the issue, you can’t fix that with arthroscopic surgery.”

DiNubile said “regenerative techniques,” including microfracture surgery, might be tried.

“His knee might feel better, but will he be able to compete at the level he would need to, especially in today’s very physical and grueling game with younger and younger opponents with power and unlimited energy?” DiNubile said.

Those are tough questions to answer in the affirmative no matter what the precise nature of Federer’s latest injury.

Ken Rosewall, the Australian who is the only other man in the Open era to remain in the top 10 after the age of 40, did not have to overcome major medical issues to do so. Rosewall’s primary concern as he remained a contender in the 1970s was his younger, hungry opposition.

Federer must solve a more complex equation if he is to chase a more appropriate endgame than a lopsided defeat at Wimbledon.

For now, he remains tied with his longtime rivals Djokovic and Rafael Nadal with 20 Grand Slam singles titles. It appears quite possible that the No. 1 ranked Djokovic will be the only one of the three to play at the U.S. Open in New York, which begins Aug. 30. Nadal is struggling with the return of a left foot problem that threatened his career in 2005, a problem he has managed effectively through the years with extensive therapy and a custom-made shoe insole.

After losing (and limping) in the Washington tournament this month, Nadal withdrew from the National Bank Open in Toronto and the Western & Southern Open in Mason, Ohio, and returned to Spain for treatment. He has yet to confirm that he will play at the U.S. Open, where he has won four singles titles.

Federer, who won his five U.S. Open titles from 2004 to 2008, last played in New York in 2019, losing in the quarterfinals in five sets to Grigor Dimitrov in what could very well turn out to be Federer’s last U.S. Open match.

“He’s in good hands,” Annacone said, referring to Federer’s support team. “But at some point we knew Father Time, in some way, shape or form, was going to wrestle the reins out of his hands and Rafa’s and Serena’s. Let’s just hope that all of them can retire on their own terms, not stop because they have to.”

As the Taliban seize control, here’s what Australia can do to help our people

'The White Lotus': Steve Zahn Worried He Might Die While Shooting the Scuba Scenes
World News