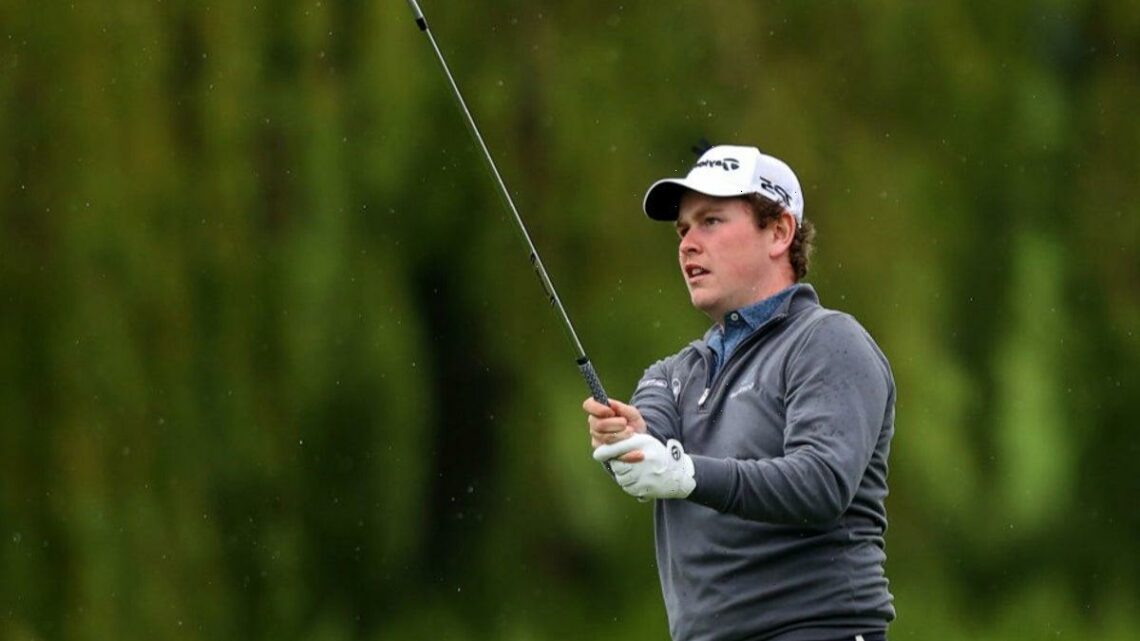 Robert MacIntyre justified his position as pre-tournament favourite by claiming a share of the halfway lead in the Betfred British Masters.

MacIntyre produced golf which would not have looked out of place on his beloved PlayStation as he birdied the first five holes of his second round at The Belfry on his way to a superb second round of 66.

That took the 24-year-old left-hander alongside fellow Scot Calum Hill and English veteran Richard Bland on seven under par, with 2018 winner Eddie Pepperell, Julien Guerrier and Justin Harding all on six under.

“I was in free flow,” MacIntyre said of his flying start, which only came to an end after a tee shot into the water on the sixth. “I hit a couple close but the putter was working. For me it felt beautiful.

“That could have been a crazy score. I still missed quite a few chances but that’s golf. If I can shoot 66-66 at the weekend playing like that you would take that.”

Asked if he had felt the pressure of being the top-ranked player in the field this week, the world number 45 added: “Not at all. After this (interview) I will hit a few balls, might grab room service and then I bring my PlayStation everywhere I go, so I will be on that for a couple of hours with my pals.

“Taking that with me is a huge stress reliever. I feel sorry for the people that are next to me (in the hotel) because it’s half eleven at night, no matter the tee time, and I’m roaring with my pals on the headset.

“That just keeps me away from golf as much as I can so that when I come out here and am competing it’s 100 per cent focus. I feel I’ve really upped the focus in the last eight months, just focusing on golf when I’m on the golf course, don’t worry about outside things.”

At 48, Bland is twice MacIntyre’s age and admits it would be a dream come true if he could win his first European Tour event at the 478th attempt at such a famous venue.

“It would mean everything, especially at my age,” said Bland, who has yet to record a single bogey on the Brabazon course which has staged four Ryder Cups.

“Of course we’re all here to win and if I could do that at such an iconic event as the British Masters, that would be all your Christmases coming at once I think.

“The chances are probably going to come fewer and farther between – that’s not being negative, that’s being pretty realistic. I’m going to try and go out there and not think about it too much.

“The old cliche, just one shot at a time as best I can.”

Pepperell was in the world’s top 35 after winning this event at Walton Heath in 2018 and again after finishing runner-up in his title defence at Hillside, but has fallen down the rankings and began the week in 210th.

“I’m clearly useless when I don’t play frequently,” he admitted. “When I do play quite often I tend to learn a bit, figure it out and go on a bit of a run. Hopefully this is the beginning of that.

“I want my career to kind of restart a bit. It has felt very stop-start and it’s clear it’s no good for me. I’ve just fallen in some bad habits and I’ve had such a hard time getting out of them.”

Tournament host Danny Willett was four shots off the pace after a disappointing 72, the former Masters champion dropping three shots in his last four holes.

“You can definitely shoot yourself in the foot the first two days because you have got other things on your mind,” Willett said. “You’re thinking, ‘I’ve got to get finished, then do this and do this’.

“But it’s been nice to get a couple of steady rounds under my belt and now this weekend, after today’s media and bits and bobs, I can get the head down and really focus on getting up the leaderboard to see if we can have a good performance.”