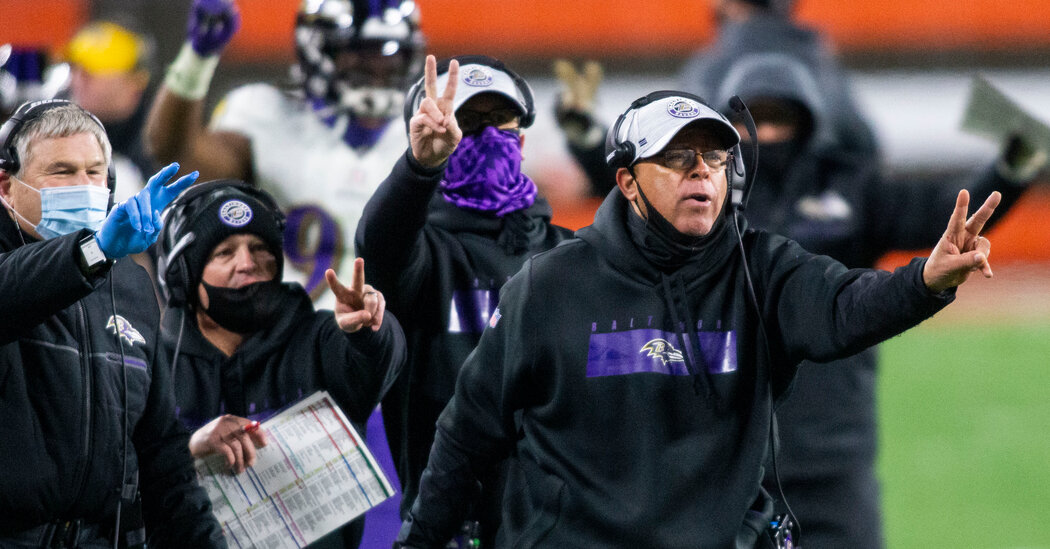 As their tumultuous season bleeds into a tumultuous January, the Houston Texans have reportedly chosen the Baltimore Ravens assistant David Culley to help foster their revival, making him the first — and only — Black head coach hired after the 2020 regular season.

Culley, 65, has a long and distinguished N.F.L. résumé, but this will be his first head coaching job at any level, and he joins the organization at a fraught time, as it strategizes how to proceed with disgruntled players, a star quarterback, Deshaun Watson, who is reportedly seeking a trade, and without many draft assets after trades gutted the supply.

Culley, the Texans’ first full-time head coach of color since their inception in 2002, is the second head coach from a nonwhite background hired by a team this winter. Romeo Crennel, who is Black, had been interim head coach since October 2020 when the team fired Bill O’Brien, the coach and general manager, after starting the season 0-4. The Jets hired Robert Saleh, believed to be the league’s first Muslim Arab American head coach, earlier this month.

The league, which has long been scrutinized for lacking diversity across its coaching positions, updated its interview processes last May, increasing the minimum number of interviews teams were required to conduct with external head coaching candidates from nonwhite backgrounds from one to two. But the guideline, the Rooney Rule, does not require teams to hire coaches of color, and the league will enter the 2021 season with only one more nonwhite coach than it started with last year. Three-quarters of the league’s players are people of color, but the vast majority of top coaches and player personnel executives are white men.

“They are trying, but they are struggling,” Nellie Drew, director of the Center for the Advancement of Sport at the University at Buffalo School of Law, said of the N.F.L. in an interview Thursday. “The results to date have not been impressive, especially given the number of people of color who play in the league.”

Saleh and Culley join Ron Rivera of the Washington Football Team, Mike Tomlin of the Pittsburgh Steelers and Brian Flores of the Miami Dolphins as head coaches of color. In 2011, the N.F.L. had, for the first time, eight nonwhite head coaches among its ranks, a peak it reached again in the 2017 season.

The Ravens will get two third-round draft picks, one in 2021 and one in 2022, as compensation for losing a nonwhite staff member who became a head coach as part of the N.F.L.’s incentive system that was ratified by league owners in November. The new measure was criticized by some, including African-American coaches and players.

“I just have never been in favor of rewarding people for doing the right thing,” Tony Dungy, a former head coach of the Tampa Bay Buccaneers and Indianapolis Colts, said in May 2020. “And so I think there’s going to be some unintended consequences.”

Culley filled several roles for the Ravens across the last two seasons — assistant head coach, passing game coordinator and wide receivers coach — helping to establish the league’s leading rushing offense in 2020, but one that ranked last in passing. In 2019, Culley helped bolster the Ravens to No. 1 in scoring with an average of 33.2 points per game.

Noted for his ability to develop creative schemes that improve players’ weaknesses and complement their strengths, Culley cultivated a reputation as an excellent teacher and communicator across his 27 seasons as an N.F.L. coach, most of which have been spent assisting Andy Reid, first in Philadelphia and then in Kansas City.

“David will do a good job,” Reid said after practice Thursday. “He’s a people person. He’ll bring energy to the building.”

Ravens Coach John Harbaugh overlapped nine seasons with Culley as assistants in Philadelphia and has said that he tried multiple times to hire him in Baltimore. When Harbaugh finally succeeded in 2019, luring Culley from Buffalo, where he coached the Bills’ quarterbacks, he called it a “coup.”

Culley was an athlete growing up in Sparta, Tenn., about 90 miles east of Nashville, where he played football, baseball and basketball at White County High School. He was a quarterback at Vanderbilt and went on to coach at several colleges before entering the N.F.L. in 1994 as the receivers coach with the Tampa Bay Buccaneers.

It came as no surprise to Harbaugh that Culley would be picked up this year — by the Texans.

“I do believe that David Culley would be a tremendous hire for any team; maybe, especially, the Texans with Deshaun Watson,” Harbaugh said on Jan. 11.

But the opportunity to coach Watson may not come, as the quarterback reportedly requested a trade after a series of disagreements with the Texans’ upper management. He reportedly became disgruntled when the team hired a new general manager, Nick Caserio, without his consultation this year and felt the team had been inattentive to social justice causes, including diversifying their hiring practices.

Watson had signed a four-year, $156 million contract extension in September 2020 that included about $75 million guaranteed, a $27 million signing bonus and a no-trade clause, meaning that he will have a say in where he ends up next, if the Texans pursue a deal. Culley’s hiring will not have an effect on Watson’s decision, according to ESPN.

Culley takes over a team whose 4-12 record last season almost belies the bleakness of its circumstances: limited draft capital, no elite receivers, a forbidding salary-cap situation. After finishing 10-6 in 2019 and winning the A.F.C. South for the fourth time in the previous five seasons, the Texans flopped last season. O’Brien had reportedly argued with players, including the star defensive end J.J. Watt, who later ranted about the team’s “trash” season in a postgame news conference.

“We need a whole culture shift,” Watson told reporters in a videoconference after the regular season ended. “We need new energy. We need discipline. We need structure. We need a leader so we can follow that leader as players.”

Culley will have to be that person, with or without Watson.