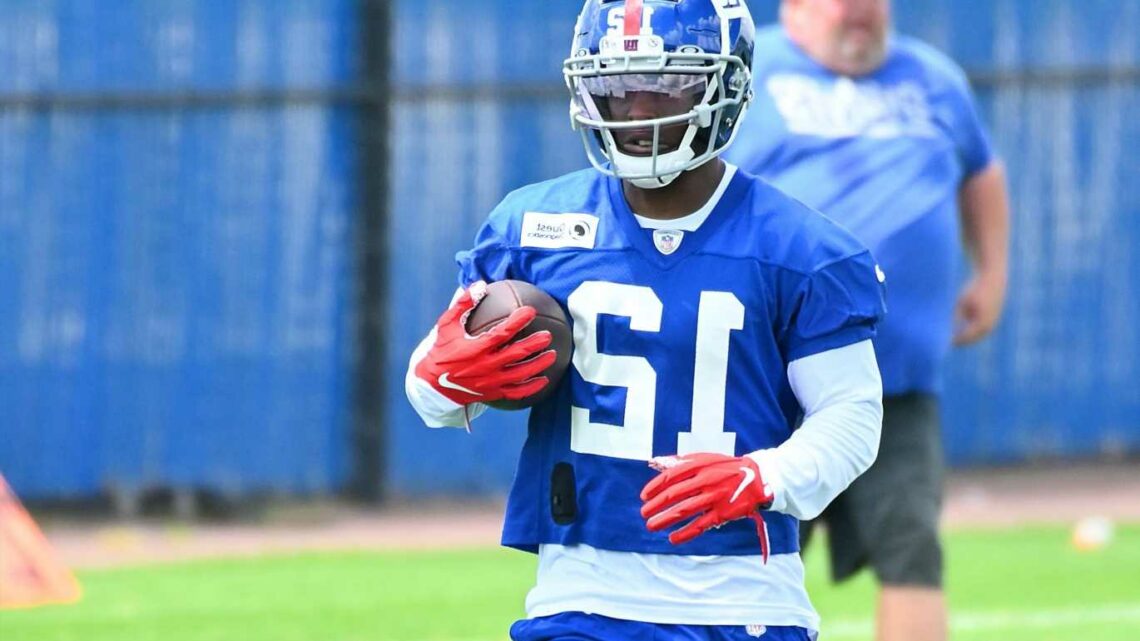 Receiver John Ross hoping to revive his career with Giants

Clock is ticking on this polarizing Giant

Why Andrew Thomas has turned Giants into big believers

As a kickoff return drill was about to commence, Jabrill Peppers positioned himself with the other Giants return men, a handful of players getting a look during a first-week training camp practice. Peppers watched as a new teammate, John Ross, fielded the first ball, catching it cleanly and then taking off as if he had a jetpack strapped to his back.

That pretty much sums up the so-far unfulfilling NFL life of Ross, who is hard to quit because he runs so darn fast. Now you see him, now you don’t. Whether Ross will be seen on the Giants’ final roster remains one of the more compelling summer questions for a team desperate to inject playmaking into the offensive attack.

For Ross, a still-young (25) athlete carrying a “draft bust’’ label with him after four brutal years in Cincinnati, this opportunity with the Giants could represent his last shot.

“Things happen, you know?’’ Ross said. “I can sit here and pinpoint a bunch of things, but that’s kind of old now. I don’t really care to go back and worry about what happened. I kind of just want to focus on why I’m here now and the things going forward.’’

Can Ross be a part of the Giants’ plans? A speedy wide receiver can hang on for years, as long as his speed does not diminish, but Ross is clinging to his career. It is not as if there is a role waiting for him to fill. The receiver corps was bolstered by the signing of Kenny Golladay in free agency and the selection of rookie Kadarius Toney in the first round of the NFL draft. Darius Slayton returns and is a big-play threat. Sterling Shepard, the longest-tenured Giants player on the roster, remains an adept slot target. Those four spots should be set.

The next tier includes Dante Pettis, C.J. Board, Austin Mack, Derrick Dillon, David Sills V, Alex Bachman and newly signed Damion Willis. Ross is different from the other players in this group, as he is the only one who has thus far been unable to live up to great expectations.

Ross was the No. 9-overall pick in 2017, taken out of Washington by the Bengals, a consensus first-rounder after blazing through the 40-yard dash in 4.22 at the NFL scouting combine, breaking Chris Johnson’s record of 4.24. It never clicked for Ross. In four years, he played in only 27 games and caught 51 passes for 733 yards and 10 touchdowns. The Bengals did not pick up Ross’s fifth year option after he had a 2020 season to forget. He got into only three games, requested a trade, was a healthy scratch for several games and finally landed on injured reserve with a foot issue.

“My story is obviously out there,’’ Ross said. “I think my biggest thing isn’t my ability, it’s my availability and me being healthy. I haven’t played 16 games yet and I’m going on my fifth year. I think that says a lot and that’s a big deal.’’

The Giants saw enough to sign Ross in March to a one-year deal worth $2.5 million, with $1 million in guaranteed money. Thus far, Ross looks the part as a guy who can get open with blazing speed.

“Obviously, he has elite speed and obviously he’s a very good athlete,’’ coach Joe Judge said. “But there’s a lot of fast guys. I mean, over in Tokyo there’s a lot of guys that are handing batons off to each other that can’t help you on the field. I think John’s definitely got a skill set that he does a good job of combining that speed and athleticism with football instincts.

“In terms of what may have happened anywhere else with any player, I’m not concerned about that. I know John’s on our team now, I’m happy to have him here and he’s on a fresh start with us.’’

Growing up in Long Beach, Calif., Ross said he remembers being fast before he ever hit a football field.

“Just being outside, being in the neighborhood playing with all the kids,’’ Ross said. “We used to play a lot of games like freeze tag and stuff. I always felt like I would outrun kids.’’

At times, his ability to outrun his friends had its downside.

“My first practice ever, and everybody kind of excluded me from the group,’’ Ross said. “We’re doing sprints and I’m just outsprinting guys.’’

Looking back, Ross said his NFL struggles may have been exacerbated by putting too much pressure on himself. He wants to get back to the freedom he felt earlier in his football life, when having the ball in his hands was his ticket to big things.

“Absolutely,’’ Ross said. “Running away from people trying to get to my destination.’’