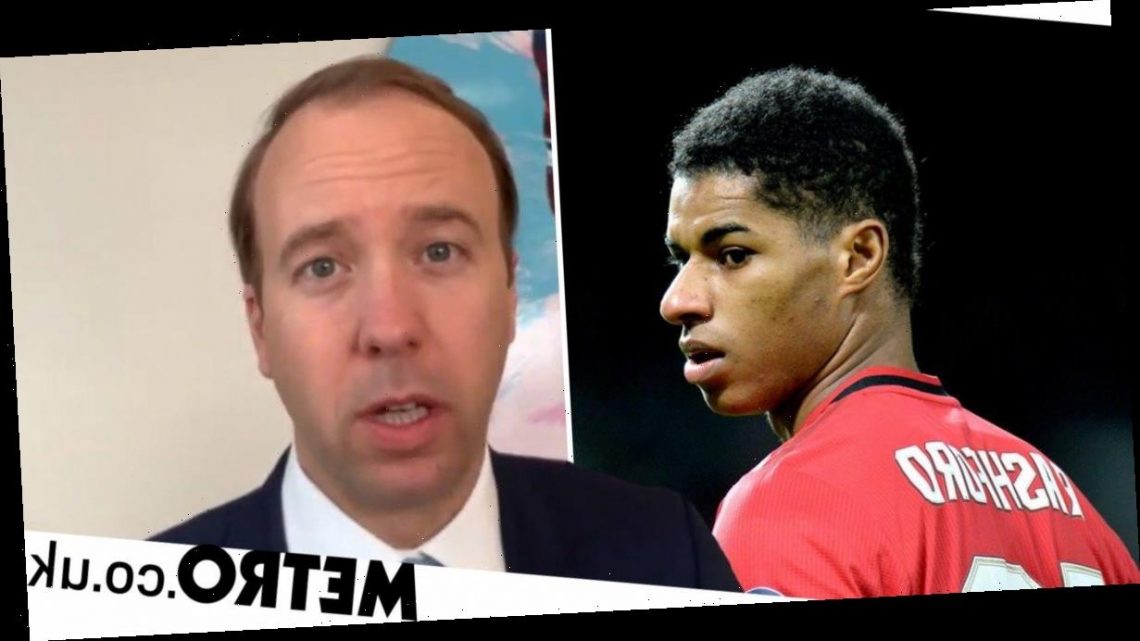 Matt Hancock’s first big play in the coronavirus crisis was to clumsily shift the focus to Premier League footballers, so there’s a certain poetic justice in the fact that his latest public humiliation was delivered by one.

The health secretary’s reference to ‘Daniel Rashford’ during his appearance on Sky News could be laughed off as a harmless mistake, were it not coming from a man in charge of a nation’s health during a deadly pandemic – a job where details and facts are really rather paramount – who has spent the past months proving that attention to detail and factual accuracy are concepts he has little regard for.

Over the course of five months, Hancock has spoken endlessly of strategy and containment, all the while managing to steer a wealthy island nation to second in the world’s deaths-per-capita league table.

In contrast, a mere five days passed between Marcus Rashford taking to Twitter to ask, ‘Anybody know who I can talk to about the government food voucher scheme?’ and the striker having lobbied Downing Street into a sudden change in policy that will now allow 1.3million children much-needed free school meals in England during the summer holidays. Words and deeds. Urgency and inertia. Life and death.

Rashford’s grassroots activism may come as a surprise to those who imagine footballers to be a filthy-rich clan of Salt Bae-obsessed, Fortnite-addicted egomaniacs, but it is far from unique among his peers.

Players perceive the issues facing the country in a way the politicians claiming to be solving those issues do not.

In fact, if there is a common trait among the current generation of young British footballers, it’s their sense of social conscience. A week before Rashford launched his school meals campaign, Raheem Sterling had once again shown himself to be one of the country’s more measured and eloquent voices on racism, appearing on Newsnight to speak about the Black Lives Matter movement and race relations in British life.

Meanwhile, in Germany a few days earlier, Jadon Sancho celebrated his first career hat trick by displaying a ‘Justice for George Floyd’ T-shirt. ’A bittersweet moment personally as there are more important things going on in the world today that we must address,’ he wrote on Twitter.

Just last night, as the Premier League kicked off after a 100 day absence, in a move proposed by team captains, players had their names replaced on their shirts with the words ‘Black Lives Matter’ and took to the knee in solidarity to the movement. A blue heart also featured on the front of their tops in a nod to the NHS.

When the coronavirus crisis hit, Liverpool captain Jordan Henderson set to work behind the scenes to establish a Premier League players’ relief fund for NHS workers; last month England captain Harry Kane announced that next season he will be sponsoring the shirts of Leyton Orient, the club where he made his breakthrough, donating the logo space and sponsorship money to three charitable causes, one being for frontline health workers.

These are only the most recent and most high-profile examples (for more, just Google the names Tyrone Mings, Leighton Baines, Rhian Brewster, Eni Aluko) but there’s a wider point here.

Surely it’s no coincidence that the players in question largely come from working-class backgrounds – many of them from ethnic minorities – nor that they are mostly in their early- to mid-20s.

Or to put it another way, they are from the generation that came of age in the era of austerity politics, and who have experienced personally the hardship inflicted by a government whose decade in office has seen child poverty rise to record levels, homelessness increase by 250 per cent and the country’s six richest people amass as much wealth as the bottom 13million.

There’s little doubt that the money in football is obscene, not least in a world where scarcity and shortage are so grimly prevalent.

But football also stands as one of the vanishingly few examples of true meritocracy in a country run on back-scratching cronyism. A rich dad, a private education, an ‘in’ with the big boss – none of those things help a person become a Premier League footballer.

It’s a world where privilege counts for little, and hard work and talent count for a lot. Which is why, in a time of spiralling poverty, today’s players perceive the issues facing the country in a way the politicians claiming to be solving those issues do not.

They have also shown themselves to be people who recognise the difference between paying lip service to a cause and truly supporting it – between talk and action.

Perhaps there’s a lesson to be had there for a government that has spent the last few months delivering so much talk and such little action.