Home » Sport » Ranking the WNBA semifinalists: Why Phoenix is No. 1 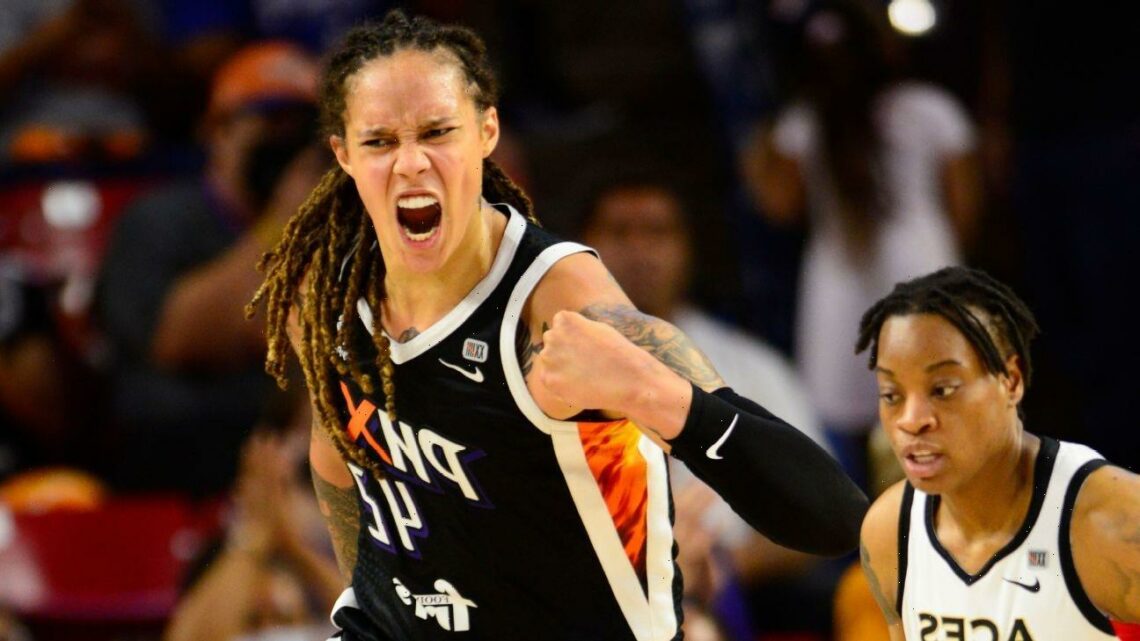 Ranking the WNBA semifinalists: Why Phoenix is No. 1

Just like we all predicted, right? Not exactly. The Phoenix Mercury and Chicago Sky shook up the 2021 WNBA playoffs on Sunday and lead their respective semifinal series 2-1. Going into the playoffs, the No. 1-seeded Connecticut Sun and second-seeded Las Vegas Aces seemed on a collision course for a WNBA Finals meeting, but now both need victories on the road Wednesday to keep their seasons alive.

The Sky got 26 points from spark plug Kahleah Copper plus made key plays down the stretch in their 86-83 victory over Connecticut in Chicago. While that game went to the wire, the Mercury got off to an 11-0 start and never looked back in getting their second consecutive rout of Las Vegas, 87-60. They won 117-91 on Thursday.

Phoenix had a playoff-record 58 rebounds, just five short of the WNBA’s overall record of 63 set by the Mercury in 2012. Las Vegas coach Bill Laimbeer said that in trying to prevent another big game from Diana Taurasi, who had 37 points Thursday, Las Vegas’ defense opened the door for Brianna Turner (career-high 23 points, plus 17 rebounds).

“We made a lot of mistakes today from a coaching perspective, not from a player perspective, defensively,” Laimbeer said. “We need to clean that up.”

For Connecticut, coach Curt Miller always points out the magic number for the Sun is having 12 or fewer turnovers. On Sunday, they had 16.

“That gets their tempo going so fast,” Miller said of the Sky.

Can Chicago and Phoenix keep it going and close out their series Wednesday (8 p.m. ET, ESPN/ESPN App) when the semifinals resume? Which team has been the most impressive of this series? Mechelle Voepel ranks the semifinalists, and our panel — ESPN’s Voepel, Kelly Cohen and Kevin Pelton — breaks down the X factors that will determine the WNBA Finals matchup.

1. Phoenix (actual seed: 5): As reported by ESPN’s Holly Rowe, Taurasi has been dealing with a high ankle sprain and a small fracture in a foot. Her wife, Penny Taylor, is due to deliver their second child Wednesday, the same day as Game 4. Phoenix guard Sophie Cunningham, whose 3-point ability and size on the perimeter are assets for Phoenix, went out of Sunday’s game with a calf injury.

So there’s a lot going on that could distract the Mercury — yet there is such a good vibe around this team now. The connection between post players Brittney Griner and Turner is clicking so well. Offense is the Mercury’s longtime strength, but the defense Sunday was exceptional. Griner said she really doesn’t want to have to pack for a return trip to Las Vegas. If the Mercury can play as well Wednesday as they did the past two games, she likely won’t have to. — Voepel

2. Chicago (actual seed: 6): Chemistry seems to be working well for the Sky, too. Even after its Game 2 loss, Chicago seemed to understand what went wrong — especially in the fourth quarter of that game — and how to move on. This series has been evenly matched, but Chicago has been able to go at the heart of Connecticut’s strength — its defense — and win twice.

Courtney Vandersloot and Allie Quigley are the only holdovers on the current roster from the 2014 Sky team that reached the WNBA Finals. That Chicago team seven years ago was 14-19 in the regular season but really put it together to get to the Finals. This year, the Sky were 16-16 in the regular season, but we saw stretches — like their back-to-back wins at Seattle in August — in which they looked like championship contenders. They’ve had stretches in these semifinals in which they look like that again. — Voepel

3. Connecticut (actual seed: 1): Along with turnovers, Miller was concerned about the Sun’s offensive rebounding Sunday, especially in the first half. Connecticut was outrebounded 35-30 and had just seven on the offensive glass.

The Sun haven’t played poorly, but they’re not consistently doing the things that they were doing all season. And Jonquel Jones hasn’t looked at MVP level the past two games. She has to have a strong finish to the series, and the Sun have to keep the pace at which they are comfortable. In the two losses, the Sky’s offense has had the last word. — Voepel

4. Las Vegas (actual seed: 2): The Aces’ slow starts are really hurting them. They trailed by nine points at the end of the first quarter in the series opener, which they ended up winning by six. In Game 2, they trailed after the opening period by 17 and lost by 26. In Game 3, they were down seven after one quarter and lost by 27.

Aces center Liz Cambage said, “I really think we’ve just got to come out with energy.” They also have to figure out their defensive schemes, which haven’t worked. And they have to hit shots. The unity that seems to exist for Phoenix doesn’t seem there for Las Vegas. But a win Wednesday could change that. — Voepel

What’s the key matchup for Connecticut-Chicago in Game 4?

Pelton: Alyssa Thomas vs. Candace Parker. One thing this series has exposed is the Sun lack the late-game shot creation Courtney Williams provided during the 2019 Finals run. On Sunday, that responsibility fell to Thomas, who initiated plays with an on-ball screen before operating one-on-one — typically against Parker. That worked well for Connecticut until Thomas missed one of her shot put attempts with a chance to give the Sun the lead.

Cohen: Jonquel Jones vs. anyone. Thomas has bailed out the Sun in this series and her play has been impressive. But you know what was also impressive? How Jones led the Sun all season. I understand Jones is struggling a bit in the playoffs, but she is why the Sun got the No. 1 seed. I want to see the ball in her hands more late in the game, and I want to see her taking control. JJ is the MVP, and if the Sun are going to avoid elimination, she has to play like the MVP.

Voepel: Courtney Vandersloot vs. the Connecticut defense. Sloot’s playmaking has been the heart of the Sky’s success in this series, like it has all season. She had a record 18 assists in the first game and 13 in Game 3. She had six in Game 2, which isn’t bad, but the Sun defense took control of that game and limited Chicago to nine points in the fourth quarter and 68 overall.

What’s the key matchup for Las Vegas-Phoenix in Game 4?

Pelton: A’ja Wilson vs. Brianna Turner. Sunday’s 2-of-14 shooting marked just the third time in Wilson’s WNBA career that she posted a negative game score (minus-0.8). Wilson was much better in Game 2, when she threatened a triple-double before finishing with seven assists, but the Aces have been outscored by 47 points in her 57 minutes of action over the past two games — unthinkable for the 2020 MVP. Turner’s defense has been a big factor. So was her finishing on Sunday, when Turner exploited double-teams on Brittney Griner to score 23 points, a playoff career high.

Voepel: The Aces guards vs. the Mercury defense. In the opener, Kelsey Plum, Riquna Williams and Chelsea Gray combined for 68 points for Las Vegas. They had 52 in Game 2 — but just 19 in Game 3. And Gray had a season-low one assist Sunday. Las Vegas needs them big time again in Game 4.

Cohen: The Aces are getting destroyed on the glass, and the disparity in Sunday’s game — Phoenix won the rebounding battle 58-29 — is impossible to look past. Las Vegas was also outrebounded in Game 2, 36-23. As Pelton mentioned, if Turner is keeping Wilson busy, the Aces can’t afford Cambage or Kiah Stokes struggling on the glass. The Mercury’s offense has been so lights out the past two games that the Aces must at least rebound better and take away some of Phoenix’s chances to keep draining buckets.

What player has been the biggest surprise (good or bad) in the WNBA semifinals?

Pelton: Jonquel Jones. Since scoring 26 points in Game 1, the MVP has been largely invisible on offense the past two games, totaling 14 points on 7-of-20 shooting. Getting the dominant Jones we saw all regular season will go a long ways toward helping Connecticut come back.

Voepel: We couldn’t be sure what kind of postseason Chicago’s Azurá Stevens would have, as she had appeared in only one playoff game previously. But she has had some big contributions, including a 15-point, 11-rebound performance Sunday.

Cohen: Can I pick the entire Chicago roster? I am so impressed by how well his team is playing. The Sky bamboozled most people who watched them all season, never finding any consistency and losing games they should have won. Vandersloot is possibly the best point guard the WNBA has ever seen, and playoff Candace Parker is an amazing thing to witness. And, of course, all the other players on the Sky are playing their roles, fitting in and helping the team peak at the perfect time.

Which teams are you picking to reach the WNBA Finals?

Pelton: Connecticut and Phoenix. These upcoming Game 4s — or Games 4, Rebecca Lobo? — are fun because of the pressure on both teams. Obviously, the top two seeds must win or be eliminated, but there’s also pressure on the lower teams to close out at home rather than go back on the road for a Game 5. I don’t think the Sun are far away from flipping the series. Las Vegas’ matchup problems seem more difficult to overcome.

Cohen: Picking this is so stressful. Heading into the semifinals, I was certain it would be Connecticut vs. Las Vegas, but now I’m going with Chicago and Phoenix.

Voepel: I lean the same way as Kevin: The Chicago-Connecticut series has been so close, and the Sun still haven’t played their best defensive game. If they can do that Wednesday, they take the momentum back to Connecticut for Game 5. Phoenix is feeling it, and the Mercury will do all they can to close it out Wednesday.