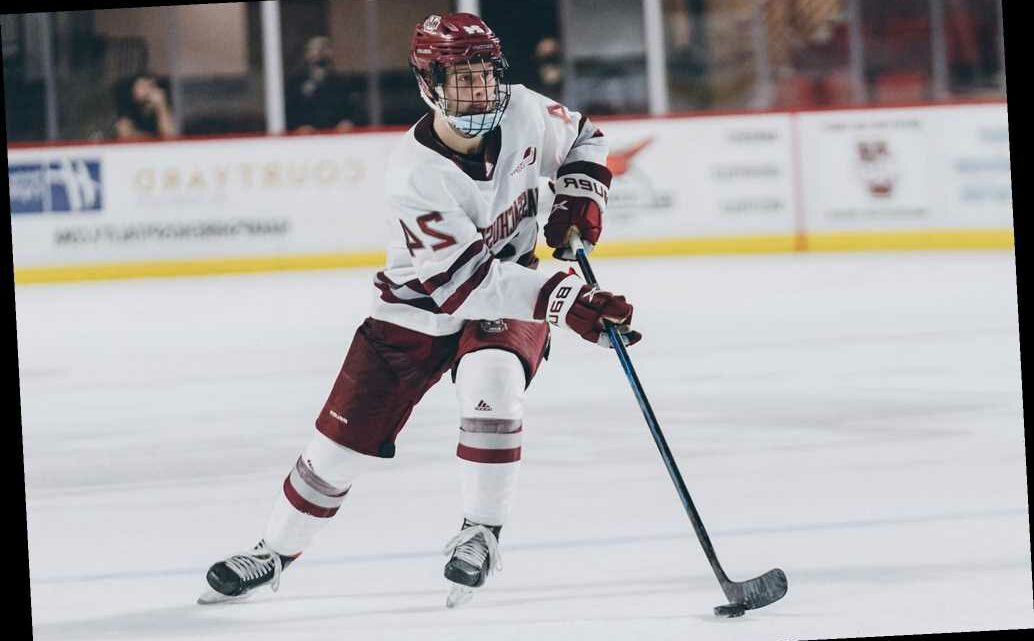 Rangers will benefit from perilous path toward playoffs

Here’s one way to save the upcoming NHL season

A wave of elation coursed over the table of Rangers brass when they realized Zac Jones was going to fall to them at the 68th pick in the 2019 NHL Draft.

“When the pick before us went and it wasn’t him, there was a big group of guys that high-fived and fist-bumped because we knew we were going to be able to take him when we did,” Chris Drury, the Rangers’ assistant general manager, told The Post in a recent phone interview. “It was an exciting moment.”

The Rangers were evidently already high on the 5-foot-10 defenseman when they drafted him, but it was at the World Juniors Summer Showcase the following month that Jones became a distinguished NHL prospect.

Now, six games into his sophomore season at the University of Massachusetts, Jones continues to raise his ceiling of potential higher and higher.

From July 26-Aug. 3, 2019, at the summer showcase in Plymouth, Mich., Jones skated alongside the best hockey players of his age in the world — and he flourished. Jones played bigger than his diminutive stature, putting his offensive instincts on full display while ensuring he was a reliable defenseman to earn a spot on the official World Juniors roster in December.

Edging out Flyers first-rounder Cam York for a spot on the top power-play unit, Jones continued to exceed expectations, recording a goal and an assist on the way to USA’s silver-medal finish.

“I think after the draft, coming from where he came from, little lesser-known situation coming out of the mid-Atlantic, he just opened a lot of eyes there,” Drury said. “Just the way he handled himself, the way he played, the total package. We were pretty excited with his offensive instincts, his defending was really good, and his speed, his skating.

“It didn’t take him long to figure out the pace and what he needed to do at that tournament to be successful.”

Jones left for the World Juniors in the middle of his freshman year at UMass, which head coach Greg Carvel and the rest of the hockey team’s coaching staff thought wouldn’t be until 2020-21. But after he tore up the USHL in 2018-19 with 45 goals in 56 games, Jones was brought to Amherst a year early.

Shortly after Jones returned to the Minutemen in January, Carvel said he received a note from Drury and the Rangers that expressed how pleased the organization was with the then-19-year-old’s development to that point.

Jones went scoreless for the remainder of the NCAA season, however, before it was suspended mid-March.

“I was all over him in the second half,” Carvel said in May, quipping, “I said, ‘Did you leave your goal-scoring ability over there?’ ”

Carvel knew the most important thing for Jones to focus on this past offseason was bolstering his strength. The former Senators assistant coach challenged Jones to get in the weight room and continue to physically develop before his 2020-21 sophomore season. And that’s exactly what he did.

Jones spent the offseason in Michigan with the strength and conditioning team from Team USA. Working out alongside members of USA Hockey’s National Team Development Program, other college players and professionals, Jones said he pushed himself that much harder to reach their level.

Though his weight consistently remains between 170-180 pounds, Jones said he has noticed how much his ever-growing strength has improved his game.

“He’s developing really well because a big part of that is his attitude,” Carvel said during his weekly press conference last week. “He’ll get to the NHL, I don’t doubt that. I think he understands what his process is going to be to get there. He’s a very coachable kid and he knows where his weak points are and he understands.

“A lot of kids, they don’t want to work on their weaknesses. When you get a kid that will do it on their own, that’s so huge and it’s so impressive to me. Zac is one of those kids.”

Through UMass’ first six games of the 2020-21 season, Jones has scored two goals with one assist and four blocks. He’s skating on the top defensive pairing and quarterbacking the first power-play unit.

“This year, I came in with full confidence that I wanted to be the best player every night and try to help my team win no matter what the case is,” Jones said on a Zoom call with The Post.

His elite hockey sense intrigued the Rangers most, along with his ability to adapt despite being one of the smaller guys on the ice.

But the reality is that Jones is in a pretty deep pool of left-handed defensemen within the franchise — including Libor Hajek (currently on loan to the Czech Extraliga), Team USA compatriot K’Andre Miller, Matthew Robertson and Tarmo Reunanen, among others.

Carvel believes that by the end of Jones’ junior season next year, he should be ready to make the leap to the NHL. Despite having several left-handed defensemen waiting in the wings, Drury will tell you that the Rangers allow their best players to find their way onto the ice.

Regarding a rare and gifted offensive talent like Jones, Drury said the team has high hopes of him doing just that.

“I like it, honestly, I like the competition,” Jones said. “I like to be able to hopefully one day go to battle with all those guys and try to earn a spot on that top roster. These guys are all terrific young defensemen that can be in the NHL any night.

“I just hope that whenever I get the chance to hopefully sign and get a chance to prove myself, that I’ll be ready for the battle.”