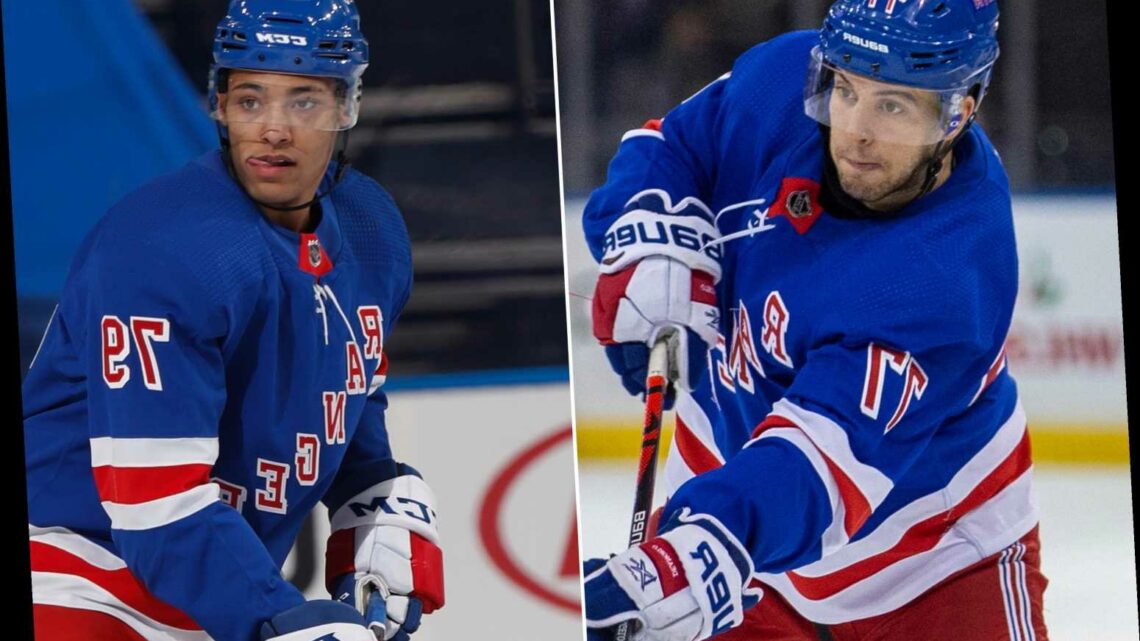 Tony DeAngelo has played his last game for the Rangers.

President John Davidson and general manager Jeff Gorton made that statement loud and clear during a press conference prior to Monday’s game against the Penguins to discuss the aftermath of a physical altercation between the controversial defenseman and goaltender Alexandar Georgiev following Saturday’s overtime loss to Pittsburgh, which led to No. 77 being placed on waivers Sunday.

“Yes, he has played his last game for the Rangers,” Gorton said. “What happens going forward I don’t have the answer for that.”

The Post reported that the incident between DeAngelo and Georgiev followed miscommunication between the two during overtime Saturday, which led to Sidney Crosby’s game-winner. The 25-year-old made a remark to Georgiev just as the team left the ice, leading to the scuffle.

DeAngelo has been designated to the taxi squad for the time being, but Gorton said the organization is looking to orchestrate a trade. Gorton also mentioned there hasn’t been any discussions about terminating DeAngelo’s contract.

Davidson opened up the press conference by refuting speculation regarding DeAngelo’s relationship with rookie K’Andre Miller. There were rumors about DeAngelo withholding Miller’s first-goal puck and that the two had a strained relationship.

“That is 100 percent false,” he said. “There is no truth to it whatsoever. And for people to write things like, other people to digest it is just wrong. It’s sad, actually.”

The beginning of the end for DeAngelo was seemingly his reaction to getting scratched in the second and third games of the season. After the player took an unsportsmanlike conduct penalty for slamming the penalty box door in the season-opening loss to the Islanders, head coach David Quinn benched DeAngelo for disciplinary purposes in the 5-0 rematch win before sticking with the same lineup the following game against the Devils.

“After the first game of the season, obviously, he was told he wasn’t going to play,” Gorton said. “Tony wasn’t able to move on from that, it was something that he was trying to get through. I had spoken to him at that time and said, ‘Listen, if there’s any more issues here the time is going to come where we’re going to put you on waivers and move on. No more issues, if your name is in anything at all that we have to hear, we’re going to move on, we’re going to make that move.’

“I made that statement to him, something happened and I pretty much have to stay true to my word here and the organization’s word that it was time to move on. … We feel like moving on from Tony is the right thing to do. It’s about winning, and we feel like this is a move we had to make in our room to put us on the path to winning.”

DeAngelo, who signed a two-year, $9.6 million extension with the Rangers this offseason, was also reprimanded by the organization for his presence on social media in recent months. From challenging a fan to a fight outside of MSG to questioning what happened to the coronavirus pandemic during the recent election, DeAngelo engaged in multiple conversations with Rangers brass about lowering his off-ice profile.

Asked if his social media antics had anything to do with the organization’s decision to move on, Davidson said there was no correlation.

“There’s a fine line with social media, but there’s obviously freedom of speech,” he said. “We certainly watch what our players say and do on social media. Tony, we’ve had informal discussion about it, there’s always a trickle-down effect.”

DeAngelo came to Broadway from the Coyotes in the 2017 draft-day trade with the seventh-overall pick (Lias Andersson, now with the Kings) in exchange for Derek Stepan and Antti Raanta. He had a history in the Ontario Hockey League, which included getting suspended twice for violating the league’s harassment, abuse and diversity policy.

“We did a lot of research, talked to a lot of people about Tony prior to acquiring him,” Gorton said. “We did our homework, we were comfortable. If you look at his track record with us, I think you know his season spoke for itself last year.

“There’s been a few things along the way but really nothing that would suggest anything from his past in Juniors, there’s nothing like that that’s ever come up with us.”

The Best Amazon Deals on Leggings